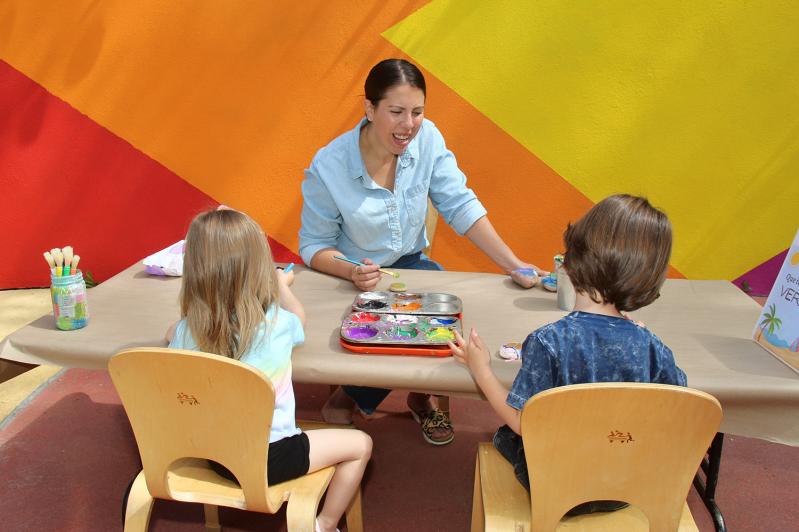 Liz Bard, the director of education for the Children’s Museum of the East End, worked with kids to paint rocks that will liven up the garden behind the Bridgehampton Citarella. This summer the gourmet chain is once again helping raise money for the East End Fund for Children.
Durell Godfrey
By Judy D’Mello

The East End Fund for Children, a coalition of seven local nonprofits dedicated to meeting the needs of the community’s most vulnerable, will partner with Citarella, the gourmet food market, in a summer fund-raising campaign.

From Thursday, June 23, through Labor Day weekend, shoppers at each of Citarella’s three South Fork locations — Southampton, Bridgehampton, and East Hampton — will be offered the opportunity to donate to the East End Fund for Children in a variety of ways. Details of the fund-raiser will be announced at a press conference next Thursday, which will be held at 4 p.m. in the garden behind the Citarella store in Bridgehampton. Rocks, painted by children from the coalition, that depict what they love about living on the East End, will be placed in the garden as a commemoration of the partnership.

According to Debra McEneaney, who oversees marketing and development for the Bridgehampton Child Care and Recreational Center (a member of the coalition), this will be Citarella’s second fund-raising initiative with the East End Fund. Last summer, from around the end of July to Labor Day, Citarella offered a “roundup” option to its shoppers — that is, to round up one’s total to the next dollar amount.

In addition, reusable shopping bags featuring children’s artwork and the coalition’s logo, designed by the famed designer and art director Walter Bernard, were sold in Citarella for $20 each.

“There are a whole lot of people who shop at Citarella who didn’t know there are poor kids in the Hamptons. Or, even people in need, so it’s been fantastic,” Ms. McEneaney added.

The East End Fund was created in 2021, following a tough year of pandemic-related issues such as shrinking resources and a greater demand for outreach services. Deciding that a joint coalition would be stronger and more effective, a new nonprofit was formed that comprises the Retreat, the domestic violence shelter and support organization; the Bridgehampton Child Care Center, which provides care, education, and enrichment programs for children of all ages; the Eleanor Whitmore Early Childhood Center; I-Tri, an athletic empowerment program for adolescent and teen girls; the Southampton Youth Association, which provides extracurricular recreational services for schoolchildren; Project Most, an after-school and learning program in East Hampton, and Bridgehampton’s Children’s Museum of the East End (CMEE).

In a press release, Mr. Gurrera said, “We are proud to expand our partnership with the East End Fund for Children. Citarella has a history of giving back to our community through organizations with shared values and we’re fully committed to supporting the E.E.F.C.’s mission of providing essential food and educational programming to our most vulnerable children living in the East End.”

Ms. McEneaney echoed his sentiments. “Citarella cares so much. They really do. They sent employees from each store last year to the different organizations in the fund, so they could get to know who they were promoting,” she said. “The whole partnership is just filled with goodness for these organizations. And it’s financially rewarding too.”

Correction: An earlier print version had an incorrect start date.