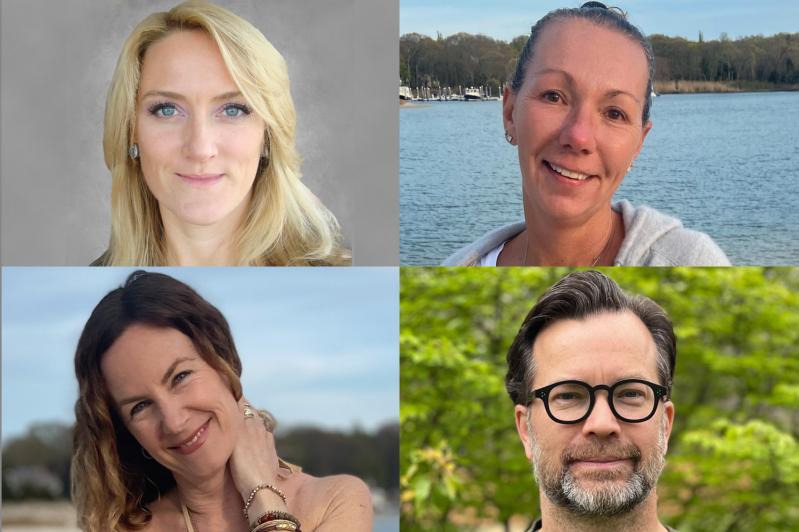 In the race for two open seats on the Sag Harbor School Board, four candidates — including three who are running write-in campaigns — have aligned themselves into two slates. Initially there was only one candidate, which surprised many in the village, where school board races usually have multiple people running.

The only name officially on the ballot is that of Grainne Coen, who was the only one to submit a nominating petition by the April 18 deadline. Seeking election as write-ins are Heather Hartstein and Janice D'Angelo, running together, and Ronald Reed, who is campaigning alongside Ms. Coen.

Two sitting board members, Chris Tice and Yorgos Tsibiridis, are not seeking re-election. Ms. Tice served four terms on the board, Mr. Tsibiridis, one; plus a prior year as an appointed member.

Ms. Coen is a 25-year veteran of the finance industry whose family moved to Sag full time in 2018. Formerly a portfolio manager for a large financial institution, she is now president and chief financial officer of a Nasdaq-listed company. She has two children. "We'd heard such great things about the school," she said. "They have all appeared to be true." She and her husband are planning to open a business in the village this summer.

Ms. Coen's previous work with the Sag Harbor School Board includes two years on the board's policy committee, and as a member this year of its audit committee.

"I've been involved, and this seemed to be the next logical step," she said. "We just love the school, we love Sag Harbor, and it's another opportunity for us to be invested in the community."

Ms. Coen said she would like to see the election of board members with a greater diversity of skills and experiences. What she herself would bring to the table, she said, is "accountability, transparency, and helping with budgeting — things I do in my day job, and have done for 20-plus years in my career. I obviously care deeply about the children in the community. That is a massive priority — having public education that is available to everybody, and an inclusive community is very important."

During the pandemic, before New York State lifted indoor mask mandates, Ms. D'Angelo and Ms. Hartstein were vocal advocates for a "mask choice" policy allowing parents to decide if their children would wear masks to school. Ms. Hartstein has also been an advocate of "medical freedom."

Ms. D'Angelo has lived in Sag Harbor for 35 years. All of her three children have either graduated from or currently attend Pierson High School. In 2017, she was an outspoken critic of Pierson students who were making and selling "pussy cat hats," she said, to benefit the Retreat, the domestic violence shelter, characterizing the fund-raiser as too political for a school environment. "I would think that in five-plus years, people would have moved on. This campaign has resurfaced the issue and the vitriol towards me for having an opposing view," Ms. D'Angelo said this week. "If there were another club selling red 'MAGA' hats, I would have done the same thing. Politics, especially divisive politics, have no place in schools, especially when most children are too young to understand."

Until last September, Ms. D'Angelo owned and operated the Sag Harbor Pharmacy. Before that, beginning in 1990, she was a police officer in Sag Harbor. She retired as a detective from the East Hampton Village Police Department in 2004. She was also a member of the Sag Harbor Volunteer Ambulance Corps and served as treasurer of the PTA. She now works for the construction company that she and her husband own.

"I feel there needs to be more than one perspective" on the board, Ms. D'Angelo said in a written statement. "Many parents in the community feel their voices are not being heard. I would like to be the voice for the parents who feel that they cannot speak up . . . I would like for these parents to be heard every day, not just once in a while in a four-hour board meeting. I would like to represent different points of view and ensure that parents have a voice in making educational and administrative decisions."

Ms. Hartstein, the mother of five children, has lived with her family in Sag Harbor for 10 years after previously living in Montauk.

She has a degree in accounting and has also worked as an elementary and special education teacher, she said in a written statement. For the last eight years, she has been teaching mindfulness, meditation, and wellness to both school children and private clients. She describes herself as "a parent advocate" for all her children, but "most especially for my son Shane, a fifth grader at the elementary school who has Down syndrome."

Ms. Hartstein emphasizes "transparency and authenticity," explaining that "authenticity is critical when interacting with others, as well as inside of any learning environment, as it allows students space to share in a meaningful way. They know they will not be judged, therefore they are more likely to share how they really feel."

"I have always had great pride in this district," Ms. Hartstein wrote. "My perspective is unique, as I am in a position to work with students, execute programming with teachers, and discuss results with administration in order to address systemic change. I see all sides of the coin, if you will."

Mr. Reed, an architect and artist, is making a second run for a board seat. Two years ago he was endorsed by the Teachers Association of Sag Harbor (which has since stopped endorsing candidates).

Sag Harbor folks will also know Mr. Reed from his role on the village's planning board, the Covid-19 reopening committee, and the waterfront zoning redevelopment panel, and from the Main Street shop that his wife owns, Matriark, which often donates to local charities. He has also been active in Solidarity Sundays, a grassroots group currently advocating for affordable housing. "It's a larger topic of discussion that impacts all of us, including the school district's ability to recruit and maintain high-quality teachers," he said.

He has two children of mixed ethnic backgrounds attending school here. He said his priorities "will always revolve around the education of our children and moving the school forward, making as much improvement as we can for the betterment of our children."

His decision to enter the race this year was made in concert with his family, he said. "We have discussions and take each other's views into considerations when making decisions to do things like this."

If elected, Mr. Reed said, he would bring to the board a diverse set of skills and experiences and a greater focus on middle school programming. "With facilities, it's good to diversify the backgrounds and practices to enhance the board, to improve it and make it more positive," he said. "But it's not just about architecture. It's about education."

Voting is from 7 a.m. to 9 p.m. in the Pierson High School gym on Tuesday. Also on the ballot is a $45.99 million budget and an additional proposition to approve money for a heating, ventilation, and air-conditioning project, covered separately in today's Star.