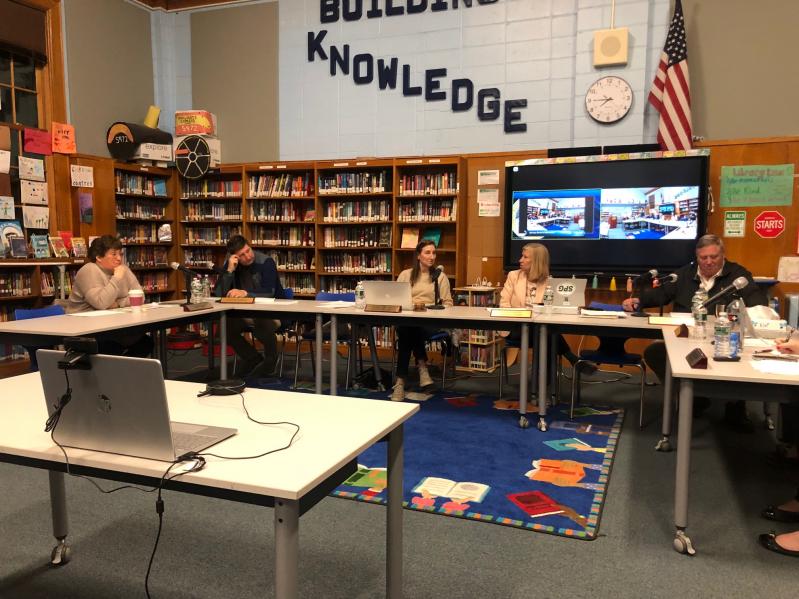 Springs School District officials have reached their goal of trimming enough money from their 2022-23 budget proposal that it complies with New York State rules on tax-levy increases and will need only a majority vote to pass.

With the school board poised to put it on the May 17 ballot, the decision will rest in voters' hands: Support a 6.76-percent spending increase or face even more cuts if the budget fails to pass. The proposal is for $32.89 million, or $2.08 million more than the current year's expenses.

The associated tax-levy increase is 5.46 percent, which is different from the "2-percent tax cap" that many people are used to hearing about. The difference comes from items unique to Springs, including real estate development within its borders and debt payments on the money borrowed to finance a recent expansion and renovation project. Unlike some of its neighboring districts, Springs has not overridden the tax cap since it took effect in 2012.

"What children need the most is in this budget. There is nothing extra," Debra Winter, the superintendent, said this week.

Springs was able to offset about $2.7 million in rising costs by tapping into pandemic relief money it received from federal and state sources, but "we won't have that amount next year," Ms. Winter said.

The proposed change was made in consultation with the New York State Education Department, she said, and reflects "what most districts can really provide for their students." Special education teacher assignments would remain the same for the fifth through eighth grades. A previous plan to cut one general-education elementary teaching position is now a "maybe" instead of a "definite."

This month, Springs will make its final $104,250 payment on the money it borrowed in 2002 to pay for the middle school expansion, so that comes off the books, said Michael Henery, the business administrator. Several expenses for equipment for science, art, gym, smart boards, and other areas, which had been in the budget for years, were one-time costs this year and were removed. That led to $102,500 in savings.

Other changes included the elimination of one-and-a-half bus driver positions, at a savings of $57,624, and one teaching assistant, saving $25,360. Mr. Henery also trimmed $45,900 that the district had set aside for the prekindergarten program, because Springs now receives state grant money for that.

A big question mark remains regarding tuition to East Hampton High School for both general and special education, and to BOCES, Southampton High School, and two undisclosed residential schools for additional special-ed students. Ms. Winter and Mr. Henery said tuition costs were hard to project because enrollment fluctuates on a weekly basis. Their original estimate included 300 general-education high school students, but by this week that had risen to 314. Both numbers are higher than what Springs had projected for the current year, which was 292 students, and the tuition rates themselves are increasing by 2 percent. In total, Springs expects tuition to rise by more than $710,000, up to $10.05 million.

"A reduction in high school tuition could definitely help us," Ms. Winter said.

"But I don't see that happening," said Mr. Henery.

If she had additional money, Ms. Winter said she would allocate it toward mental health services. "It's a crisis. . . . I continue to look at grants to give us the extra things that we need."

Mr. Henery also looked ahead to estimate how much unspent money Springs will have at the end of the current school year. He anticipates applying $1.9 million from surpluses to next year's tax levy, an increase of more than $500,000 over the current year's allocation from the same account.

He also offered a very early look at the next four years' budgets, assuming most cost increases remain in line with current growth. It is possible that Springs may have to attempt an over-the-tax-cap plan in the 2023-24 school year, he said, but it would probably not be necessary during the three years following.

During public input, Summer Romeo, a mother of two children, said the district had done a "great job getting us to the cap. I know it took a lot of hard work." However, she questioned why salaries and wages are rising by 6.5 percent. It's a "pretty big" increase, she said.

Mr. Henery explained that those increases vary depending on teachers' levels of education and years with the district. They are laid out in collective bargaining agreements, which are negotiated directly between the teachers and the school board, usually every five years. Such negotiations are in fact currently underway, discussed during an executive board session before Tuesday's meeting started.

David Buda, a longtime Springs resident who closely follows school and town operations and is often critical of both, commended the district for "getting the budget back down to no more than the budget cap law allows, so that's a good thing." However, he said he hopes this is "the last year we see a simulation of the budget" that simply "rolls over" the prior year's expenses.

"After close scrutiny," Mr. Buda said, many of the original 2022-23 expenses "were not really needed. If we start with a more realistic place, it will be easier to accomplish a tight budget."

At the end of the workshop, Barbara Dayton, the school board president, said the board was "very aware" that "especially over the last two years, it's been a difficult time for a lot of people . . . I think we have done our best as a board to do the best for our taxpayers along with the kids."

The board will hold a brief special meeting on Tuesday to adopt the budget for presentation to voters on May 17. There will be a public hearing on May 9, at a time to be announced. Another important date is Monday, April 18, when school board nominating petitions are due to the district clerk no later than 5 p.m.

In other news, the school board has picked a contractor to repair and replace the sections of the roof that were not addressed in the recent renovation and expansion project. The $628,000 contract was awarded to More Consulting Corp. of Yaphank.

A Conference for Young People to Create Solutions
Get Outside, Get Moving
Two Traditions, One Fair in Springs
END_OF_DOCUMENT_TOKEN_TO_BE_REPLACED