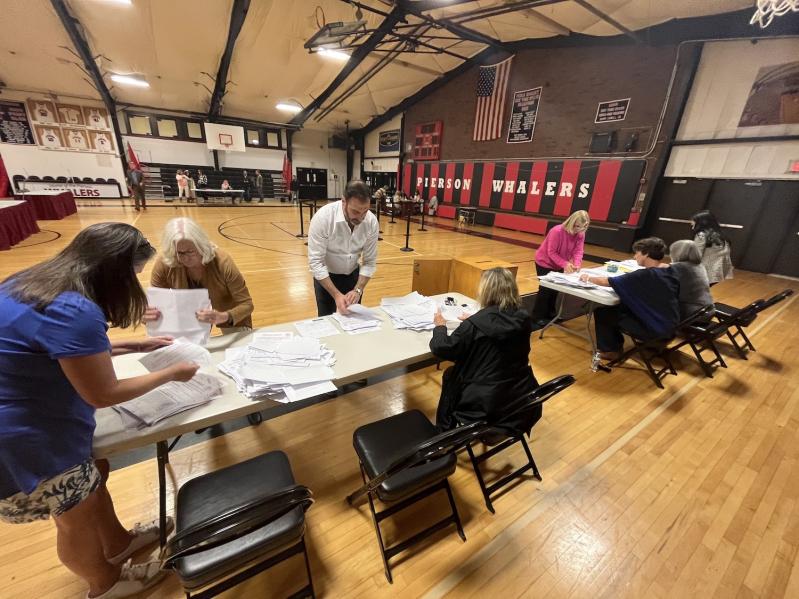 The Sag Harbor School District’s bid to buy five wooded lots on Marsden Street for the purpose of creating new athletic fields passed last Thursday by a vote of 638 to 521.

The outcome means that residents have given the district the green light to spend $3.325 million from its reserves toward the deal, which relies on a $6 million contribution from Southampton Town’s community preservation fund. That contribution is still under consideration by the Southampton Town Board, which has yet to hold the required public hearing and vote to finalize the arrangement.

The runup to last Thursday’s vote was marked by tense discourse that divided the community. As has been the case in past school district votes, controversy was reflected in the voter turnout. A similarly controversial proposal in 2016 to put a turf playing field at the school saw a nearly identical turnout but failed by a wide margin. In this case, just over 55 percent of voters were in favor of the land buy.

“I’m very relieved. This is for generations to come,” said Sandi Kruel, the Sag Harbor School Board president. “This is a momentous accolade for the district that has been years in the making, and I’m so happy to be a part of it.”

At least eight people spent about an hour hand-counting the paper ballots. Electronic voting machines were not available to the district because of how close the vote was to Tuesday’s midterm elections for state and federal offices.

Ms. Kruel and Jeff Nichols, the district superintendent, reiterated their commitment to seeking extensive public comment before any decisions are made on the structure and surface of future athletic fields.

Mr. Nichols thanked the voters. “I’m looking forward to the next stage of the process,” he said.

During a school board meeting on Monday, several speakers questioned the outcome of the vote. “Those responsible for counting the vote [were] cheering the conclusion of the count. They weren’t necessarily unbiased,” said Karen Arrigoni, who also alleged that school employees were handing out fliers the morning of the vote urging people to vote “yes.”

Alex Kriegsman, a school board member, responded by saying, “Nobody handed anything out on behalf of the school. This is a process that was vetted by counsel, and by the time we got to the vote, everyone was well aware of what the issues were, and the community has now spoken and voted in favor of it.”

Ray Pepe, another speaker, asserted that the voters have not “spoken in a resolute way, because 55 percent to 45 percent is not a unanimous ‘yes, we   want to do this.’ ”

“We would like to think the school would open up the discussion in a truly democratic way to let the community speak and have a discussion about what we really think about plans that the school might have, which have not been put forth in any detail as yet,” Mr. Pepe said.

During a follow-up conversation on Tuesday, Mr. Nichols reiterated that there are no concrete plans yet, and he repeated the district’s commitment to doing exactly the kind of outreach Mr. Pepe said he was hoping for.

“The next step is garnering community feedback, which ultimately is going to guide the capital improvement project and the bond that finances it,” Mr. Nichols said. “We’re trying to focus on ways to increase outreach efforts.”

He said the district has kept all of the paper ballots cast by voters, including the 78 absentee ballots, locked up in a safe place.

For Southampton Town’s part of the deal — originally put forth in writing on June 24 by Lisa Kombrink of the town’s C.P.F. committee — Supervisor Jay Schneiderman said by phone on Tuesday that it may have been a somewhat premature offer.

“We wanted to see how that vote went with the school, and now we have to decide. I know there are people who say it is not a good use of C.P.F. dollars, but there was a time when the town did help the East Quogue school build athletic facilities. It wasn’t using the C.P.F., but it did set some precedent. I’m not sure it’s a bad precedent.”

However, he said, “when it was first brought to the town board, it felt more like a community park that we were building together with the school, very multipurpose. Now it feels like the school’s athletic facilities that they’re asking for the town to help with, with ancillary or secondary public use. Where we go from here, I’m not sure. . . . I need more information before I would be ready to set a public hearing.”