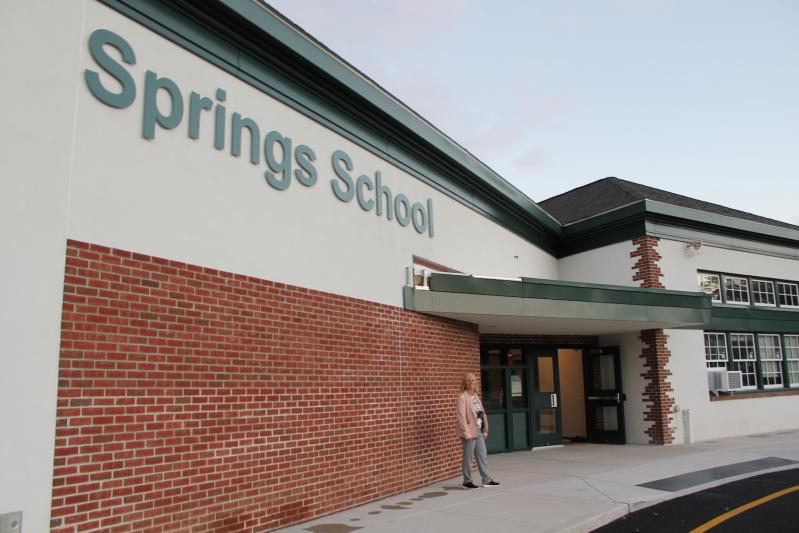 With in-person classes hanging in the balance, the Springs School Board on Tuesday adopted a five-day return rule for kids and employees out on Covid-19 quarantine or isolation — a distinct departure from the 10-day rule maintained by several nearby school districts.

The decision comes amid record-high absentee rates in Springs: Whereas 5 percent is the norm, almost 25 percent of students have recently been out of school either recovering from Covid-19 or in quarantine. The decision also came over the objections of several Springs teachers who called in to the school board’s work session in support of keeping the quarantine policy at 10 days.

As Springs moves forward with the change, the East Hampton School District — where Springs sends its high school students — said this week that it is maintaining the 10-day policy. So are the Montauk and Sag Harbor School Districts, according to administrators there.

Another controversial Covid policy, known as test-to-stay, was on the board discussion dockets in Sag Harbor, Montauk, and Springs this week. The policy — proposed by the federal Centers for Disease Control and adopted by health departments in New York State and Suffolk County — allows unvaccinated students who have been exposed to the virus in school to return for in-person classes as long as they are asymptomatic, properly masked, and show negative test results three times within a seven-day period.

Montauk adopted a version of that policy on Tuesday, while in Springs, the five-day quarantine makes test-to-stay a moot point, school officials said. East Hampton, Amagansett, and Sag Harbor have not adopted test-to-stay. Bridgehampton School administrators did not reply to a request for comment by press time this week.

“Due to the recent surge and the need to go remote at the high school level for a few days, East Hampton will continue to operate as we have from the beginning of the year,” Adam Fine, the district superintendent, said by email. “We are continuing with the 10-day quarantine for quarantined students and staff. We will not implement test-to-stay at this point. We will reassess at the end of the month.”

Seth Turner, the Amagansett superintendent, said by email yesterday that “school officials have reviewed the relevant information relating to a test-to-stay policy, but we will not be adopting this at Amagansett at this time. We will continue with our practices that have proven successful to provide in-person instruction throughout this school year.”

In Springs, Debra Winter, the superintendent, said with the 10-day policy the district is walking on the edge of not having enough teachers, teaching assistants, substitutes, or support staff to be able to stay in-person.

“It doesn’t sound like we’re coming from a place of safety — more of a place of ‘it’s hard to find subs,’ “ said Monique Sullivan, a longtime Springs teacher and co-president of the Springs Teachers Association. “I get the struggle, but we’ve been able thus far to make it work. . . . I just went through it with my family. It was hard, but it was the right thing to do, to quarantine and make sure everybody else around me is safe.”

Ashley Dellapolla and Crystal Reiner, two more faculty members, along with Kristy LaMonda, a teacher who is the other co-president of the union, echoed Ms. Sullivan’s comments and suggested that the latest Covid-19 surge could be at a peak. Just before the holiday break, Ms. Reiner’s became the first entire classroom to be quarantined since the beginning of the school year.

“My class is an example of how it is spread in schools. Why wouldn’t we want to keep the 10 days, especially since we’re at the peak right now?” Ms. Reiner said. “Once it slows down and we’re spending more time outside, maybe we go to seven or five days then, rather than pulling the rug out from everyone now when it’s at its peak.”

Two parents lobbied for the five-day policy. “If the C.D.C. recommends it, why can’t the school adopt it?” Charlene Thomas wrote in an email to the district.

“I definitely have mixed feelings,” said Barbara Dayton, the school board president. “Maybe we should do what East Hampton is doing for another week or 10 days. On the other hand, people who are more educated on this than I am are suggesting five days.”

In Sag Harbor, Jeff Nichols, the superintendent, said during Monday’s school board meeting that he considers the 10-day requirement “another safety measure.”

“When you look at the research out there, and by no means am I a scientist, there is debate as to whether or not people at five days can continue to spread the virus,” he said. “It seems that given the high test-positive rate around us and the number of cases around us, it would be prudent to stick with 10 days for now. I think the metric that may force us to change that would be staffing levels moving forward. Thankfully, right now the staffing absences have not resulted in staffing levels that would necessitate us going to a remote situation.”

Sag Harbor is one of the first districts here to offer a remote learning option for kids in quarantine or isolation. Elementary school children will have two Google Meet check-ins each day, plus work packets sent to their parents by email. Middle and high school students will follow the usual bell schedule in a synchronous learning scenario, doing their lessons in real time.

In Springs, Ms. Winter said staff members and students who still aren’t feeling well after five days of isolation can continue to stay home. Another consideration the district is navigating is the fact that younger children can’t stay home alone, whereas high school students could most likely do that.

Deb Gherardi, one of the Springs School nurses, called in to say, “I hear everybody’s concerns. We’re all in the trenches. It’s a very difficult decision. The phone calls we’ve been fielding are the parents who want the kid back in school.”

The rest of the Springs School Board, including Tim Frazier, Pat Brabant, Amy Rivera, and Dave Conlon, ultimately agreed to go the five-day route.

Since the start of school in September, Springs has had 146 total Covid-19 cases among students and staff, according to the School Covid Report Card, an online database maintained by New York State. East Hampton has had 381 and Sag Harbor 123. Montauk has had 66, Bridgehampton 56, and Amagansett 27. Sagaponack and Wainscott, respectively the region’s one-room and two-room schoolhouses, have each reported five cases.