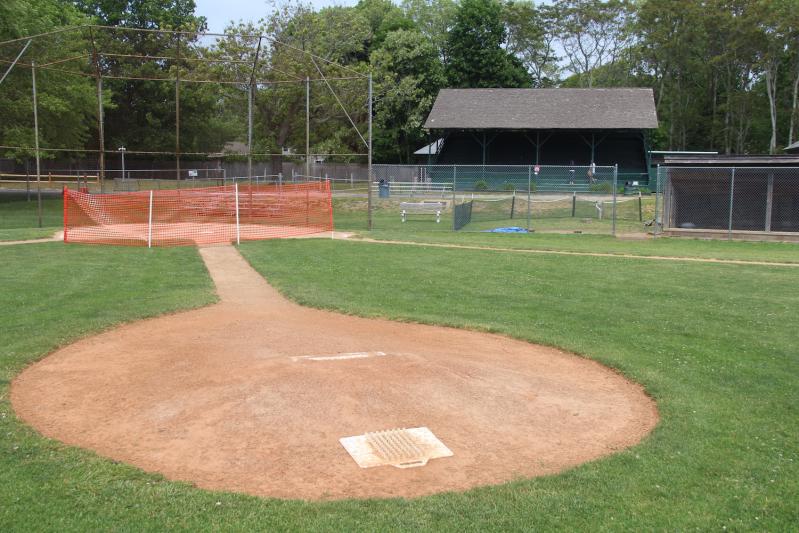 The baseball field at Mashashimuet Park in May. Sag Harbor School District representatives have been meeting with the park board over the past several months in an attempt to reach an agreement that allows students to continue playing there and also plans for facilities upgrades.
Durell Godfrey
By Christine Sampson

The Sag Harbor School District and Mashashimuet Park appear to have settled their differences on the use of park facilities for student-athletes, reaching a tentative agreement on Friday that will ultimately have to be approved by both the school board and district voters.

Jeff Nichols, the school superintendent, said Tuesday that the district will put up a bond referendum to pay for the cost of "significant improvements to the fields and facilities" and enter into "at least" a 25-year contract with the park. "In the meantime, the parties are renewing the current lease for the 2021-22 school year while the final details are completed," Mr. Nichols said in an announcement.

The "agreement in principle," as Mr. Nichols called it, will preserve the longstanding relationship between the district and the park that had been threatened in recent months by conflicts over matters of students' and spectators' safety on and practical use of the fields.

"Representatives from the school district and the park have been meeting for the past several months, focusing on this sustainable, long-term plan that keeps our youth playing at the park while simultaneously planning for facility upgrades," Mr. Nichols said in an announcement. "The district is grateful to the park and the park board for their hard work and efforts in reaching this agreement."

Janine Rayano, president of the Mashashimuet Park Board, said yesterday that "the next three or four months are going to be really important" as concrete decisions are made. The priority, she said, was solving the issue of an immediate contract so that students can start their fall season next week at the park facilities they have historically used.

"The school and the park are committed to work together in good faith on these items," she said. "We didn't come to this lightly. . . . We're really happy to understand each other and work together toward a common goal."

As recently as Monday evening, during a school board meeting, parents continued to lobby for a meeting of minds.

Kevin Dehler said that he was still looking for an answer from the park as to how the amount of money in the contract will be derived. "Perhaps they deserve more money and a longer contract or a shorter contract and less money, but that number needs to be justified somehow," he said.

He named the size of the baseball field in particular as a liability, with "bases jammed into 90 feet" as well as a lack of "reciprocation" from the park in terms of providing the school with a backup plan if it does not meet the district's needs.

Ben Gregory added that with three baseball teams trying to practice on one small field, his son's team is often sent down to practice on the softball field "with no pitcher's mound," disrupting the "continuity" needed to really learn a sport.

According to the terms of the tentative agreement, their concerns may well be addressed over time. It says fields are "to be improved to support baseball, soccer, field hockey, track/cross-country, and softball" with the "layout of new fields by [a] design professional to provide for better use and play."

The agreement calls for the restoration of the 113-year-old grandstand, and for the park to maintain the fields and facilities to agreed-upon standards. Outside groups such as Little League will still be allowed to use the park, with the park able to retain the money it receives from those groups.

The agreement does not specify how much money the annual use of the facilities will cost the district, nor does it outline how much of a rent increase there will be each year. It does specify that the natural aesthetic of the park, including trees and greenery, should be preserved.

Nancy Hallock, a Sag Harbor parent, and her daughter Lizzie, who started an online petition earlier this year to lobby for teams to play at the park, said yesterday they are thrilled with the announcement.

"It's a challenging balance for both parties to solve, and thankfully they found a way to put the kids first and take more time to work out the complicated details," Ms. Hallock said. "The Mashashimuet Park board needs to remain true to serving the needs of the entire community, not only school sports, while also protecting the delicate ecosystem where it is located, and the school must ensure students are safe. I think we all look forward to a new, healthier, collaborative relationship between the school and the park to responsibly meet the needs of the Sag Harbor student-athletes and greater community."

Ms. Rayano said there will be a fund-raiser 5K run at the park on Sept. 11, starting at 8:30 a.m., to support the renovation of the grandstand. Full details are online at mashashimuetpark.org.

This story has been updated since it was first published online.