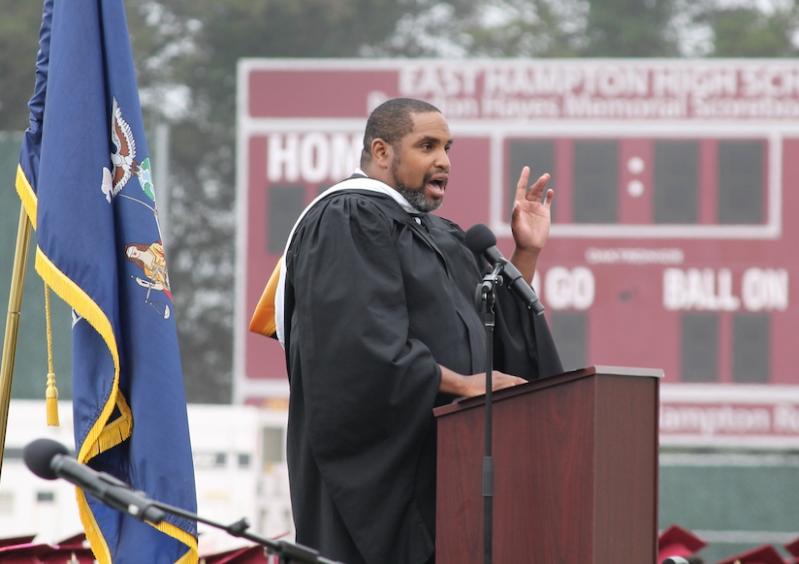 James Crenshaw, East Hampton High School's principal for just one year, resigned from his post on Tuesday to take an assistant superintendent's position in the Longwood school district.

On Monday, Mr. Crenshaw confirmed the resignation and possible appointment after the East Hampton School Board published a meeting agenda indicating it was slated to vote on his resignation on Tuesday.

Reached by phone on Monday, Mr. Crenshaw said emphatically that East Hampton is a great place to be, but that the new position is "a very unique situation -- a once-in-a-lifetime opportunity. . . . It was tough to pass up."

"I love East Hampton. It's a great place," Mr. Crenshaw said. "The team I'm leaving behind me are really great people. East Hampton is going to be in great shape."

Before coming to East Hampton, he was the principal at the Westhampton Beach Learning Center, an Eastern Suffolk Board of Cooperative Education Services school. He had two more years in his contract with East Hampton, where he had the tall task of facing down the Covid-19 pandemic. Richard Burns, who retired as superintendent in June, acknowledged last September that he did "a tremendous amount of planning" and that he was well on his way to give the students "a warm and meaningful year."

Adam Fine, the new East Hampton superintendent who had been high school principal here for 10 years, said by email on Monday that the school board "is considering a number of options."

"We would like to wish Mr. Crenshaw the best of luck in his new position and thank him for the time he put in here at East Hampton," he said.

As the district only recently appointed two new assistant principals, Jill Collins and Ralph Naglieri, Mr. Fine said he does not anticipate one of them stepping into the principal's role at this time.

"At this point we are very late in the game. . . . My goal is to find a highly qualified candidate who can lead the school next year. The worst thing that can happen," he said, is that the position becomes a "revolving door" like it was in the late 1990s and early 2000s. "I will not let that happen!"

Mr. Crenshaw's resignation continued the trend of top-level administrative shuffles over the past three years. The district recently had to replace its longtime superintendent, Mr. Burns; an assistant superintendent following the retirement of Robert Tymann in June of 2020; a principal at the John M. Marshall Elementary School in the fall of 2020, and a business administrator in the fall of 2019.

Mr. Crenshaw was not present for Tuesday's meeting. When the school board unanimously voted on his resignation, its members thanked and congratulated him. "You were here in a rough year, and may things be easier in the rest of your career," said J.P. Foster, the school board president.

The board has called a special meeting for late this afternoon at 5:30 to interview a candidate for the vacant position in executive session.