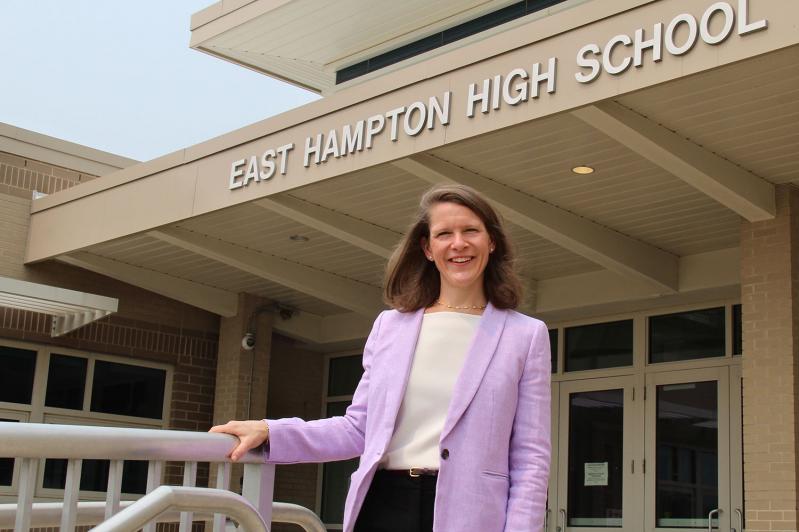 Sara Smith is a veteran educator and East Hampton resident who is set to become the next principal at East Hampton High School.
Durell Godfrey
By Christine Sampson

East Hampton High School will soon have a new principal whose face should be a familiar one around town. The school board is set to appoint Sara Smith, who lives in East Hampton, to the post on Aug. 3.

Ms. Smith comes to the high school from the Southampton School District, where she has been employed since 2008, first as an English teacher and then as dean of students and assistant principal at Southampton High School. She has also taught in Hampton Bays.

Ms. Smith's anticipated appointment follows the July 6 resignation of James Crenshaw, the high school's previous principal, after one year, to take an assistant superintendent job in the Longwood School District, where he grew up.

Adam Fine, East Hampton's superintendent, announced Ms. Smith's pending appointment in an email to residents on Friday, saying she is "a dynamic and responsive leader." She was first interviewed by a committee of teachers, administrators, parents, and students, and later by the school board, which enthusiastically endorsed hiring her, according to Mr. Fine.

"My priority has been to find a person who will lead the high school for years and who will be a stabilizing force for the building and a strong advocate for the students and staff," he said in his announcement. "I am excited to announce that we have found that person."

Ms. Smith, who received an interim letter of appointment from Mr. Fine, said this week that she was "thrilled and honored" to come to East Hampton.

"I am looking forward to living where I work and building relationships with the whole community — teachers, parents, and students — and getting to know the culture of East Hampton High School," she said. "I'm also very much looking forward to building upon all of the hard work" done by Mr. Fine, who spent 10 years as high school principal, along with Tim Fromm, the assistant superintendent, Ralph Naglieri, the dean of students, and Jill Collins, the assistant principal.

Ms. Smith has an undergraduate degree in English and political science from Hobart and William Smith Colleges in Geneva, N.Y., a graduate degree from Teachers College at Columbia University, and an administrative degree from the College of St. Rose in Albany. Her husband, Brian Smith, teaches sixth-grade science at the East Hampton Middle School, and their young daughter will eventually attend school here.

The details of her contract have yet to be released, as her appointment is not yet official.

Ms. Smith said her biggest immediate challenge will be finding ways to help students cope with and overcome the lingering obstacles brought on by Covid-19.

"The thing that is most on educators' minds is what do we need to do to recover from Covid, both socially and emotionally, and educationally," she said. "What do we have to do to get back to normal, knowing that we've all been through a pandemic?"

"The term that we're hearing a lot right now is 'learning loss.' I don't really love that term because it's a deficit mind-set. I don't think our students have lost learning — they've learned quite a bit," particularly when it comes to grit, empathy, and flexibility.

"My goal would be to try to approach those challenges . . . with an asset-based mind-set," she said. "Let's take what they learned and run with that."

Ms. Smith said her approach to education is "to find a spot for every student. . . . I'm very passionate about making sure the needs of the whole child are met. That comes through athletics, through extracurriculars, through educational programming, and how we are directly addressing social and emotional learning."

Mr. Fine said this week that he could not be happier for students and parents. He said Ms. Smith had "a comprehensive understanding of secondary instruction and adolescent development."

"She has been successful in every role she has filled," Mr. Fine said. "Her local roots in East Hampton put her over the top in my eyes. I know she is 100-percent committed to our high school and community."