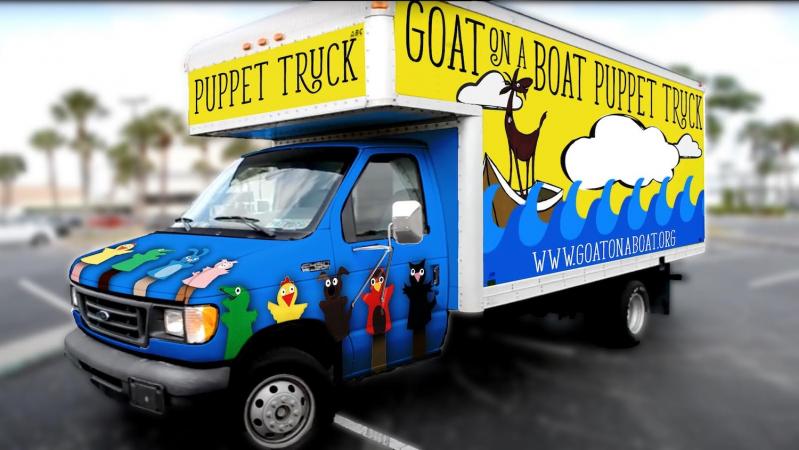 Goat on a Boat Puppet Theatre plans to take the puppetry to the people -- here and all over Long Island -- this fall as it develops and raises money for a new puppet truck and mobile stage. According to Liz Joyce, founder of the company, the truck's conception sprang from one question: "How can we bring puppets to people that don't get them?"

Goat on a Boat has been putting on puppet shows for family audiences around the South Fork for 20 years, and that anniversary caused Ms. Joyce to "re-evaluate where we were . . . and during that time I realized we aren't really serving underserved communities."

Additionally, the Covid-19 pandemic pivoted puppet shows online, and the return of in-person events brought complications of venue capacity and indoor/outdoor space. The puppet truck's mobile stage is a response to all factors.

The company is currently writing grants, shopping for suitable trucks, and fund-raising through its website. The truck also opens the possibility of collaborations with other puppet artists in different locations. Ms. Joyce said the mobile puppetry project has been well received by community members, and that she is already planning shows for and forming new partnerships with audiences in Riverside, Riverhead, western Suffolk County, and other locations.

For the first year it will probably be primarily a stage for Ms. Joyce's own company, A Couple of Puppets, with shows already in the repertory. As the project gets established, however, she is looking at creating works specifically for the truck and hosting other artists to "bring their shows on board," Ms. Joyce said.

"It's the start of a new phase for us and we're really excited about it."

This summer, people can catch live Goat on a Boat shows at venues including Guild Hall in East Hampton, Amber Waves Farm in Amagansett, and the Southampton Arts Center. The company is also working with Bay Street Theater of Sag Harbor to put on children's camps. Those interested in donating to the puppet truck project or sponsoring a show can do so online at goatonaboat.org/puppet-truck.