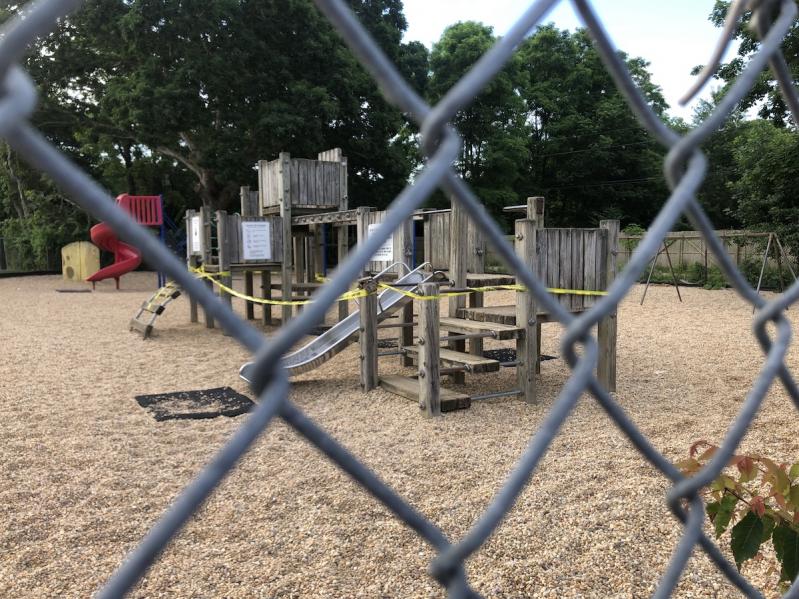 Not long after receiving favorable construction proposals for a new playground for children in prekindergarten through the second grade, the Springs School District has found itself unable to complete the project in time for the start of school in the fall.

School officials said Monday that they originally intended to pay for the new playground by repurposing some of the $1.3 million in town and state grant money the district received for its new septic system, which the district paid for upfront with the expectation that it would ultimately receive grants to offset the system's $1.57 million total cost. But it was recently discovered that a simple substitution is not permitted, and there is no guarantee that there will be enough money left over for the playground in the district's $22.9 million budget for its ongoing renovation and expansion project.

"It wasn't as black-and-white as we thought," John Longo, vice president of BBS Architects, Landscape Architects, and Engineers, told the board on Monday.

School officials were initially pleased that playground bids came in around $323,000, which was less than the original projection of $370,000. Whereas the playground for the youngest children was listed in the original capital project as a "wish list" item, a separate one for kids in the third through eighth grades is already included in the primary project.

A wooden play structure, which is one of four separate parts of the current playground, has been cordoned off with yellow caution tape. The school's insurance company recently deemed it unsafe, according to Debra Winter, the district superintendent. The school board on Monday approved a resolution to demolish it, noting that the structure "is damaged beyond repair." All of the other playground elements there are safe for children to use, Ms. Winter said.

Michael Henery, the business administrator, said Tuesday that to repurpose the septic money, it would have to first be deposited into the district's capital reserve fund as revenue. Then, the district would have to hold a special vote on whether that money can be withdrawn from the account for the playground -- the same way that money was allocated for the new roof on the regular ballot in May.

"That's the complicated mechanism that we have to adhere to," Mr. Henery said. "It's frustrating. We have the cash."

Complicating matters is the time frame. Mr. Longo said the manufacturer of the new equipment was reporting a 12-week delay for delivery, which means the district would start the 2021-22 school year without a playground for its youngest students.

"Let's open the kindergarten playground in the fall with the existing equipment," Mr. Longo said, recommending that the school board reject the proposals it had received. "We'll re-entertain it later," in September or October, he said.

However, that could essentially buy Springs time to figure out how to pay for the playground, since another construction issue has popped up: Concrete slabs for the base of the new floors are curing too slowly because of humidity in the air. Stalco Construction, the contractor, agreed to evenly split the cost of applying a "waterproofing membrane" on the concrete, which would speed things up dramatically. The school board on Monday approved $9,375, though it seemed reluctant to do so because it further chips away at the "allowances," which are the contingent funds that would otherwise be left over for projects like the playground.

"Right now, we're playing it one step at a time," Mr. Henery said. "Getting through July will be the telltale sign on whether we'll be able to free up any of the allowances. If we can't do it, that's a discussion for the board."

State Assemblyman Fred W. Thiele Jr. said in an email Tuesday that he is helping Ms. Winter "research possible grant funds to defray the cost of a new playground."

In general, the construction project is making good progress and is on track so far to be finished by Sept. 1 for the new school year, Mr. Longo and his colleagues said on Monday.