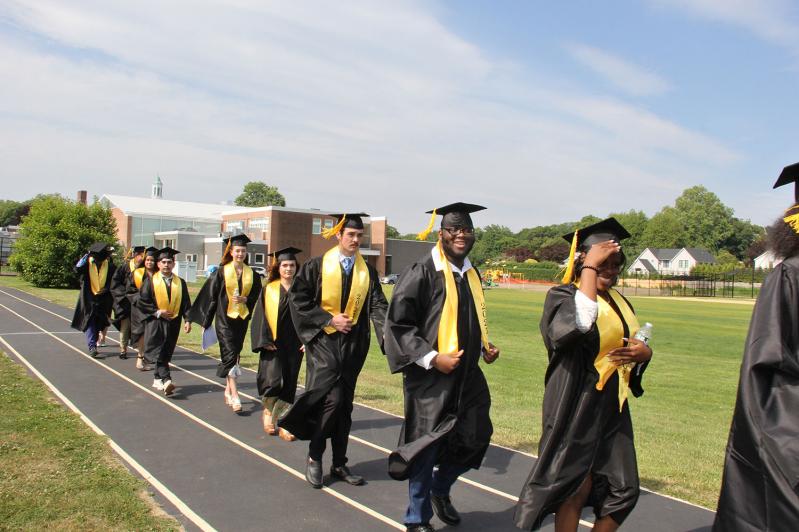 Bridgehampton's class of 2021 looked toward the future and back on their school careers on Saturday.
Bridgehampton School
By Bella Lewis

In a year where nothing was for sure, Bridgehampton High School's 110th graduation on Saturday celebrated the big and small, from the class of 2021's achievements to the very fact that the graduates and their families could gather together under the same tent.

The ceremony emphasized individuality and put a spotlight on 14 graduates' personal experiences pre, post, and during Covid. Streamed online for those who couldn't be there in person, the graduation began with a Bridgehampton TV video in which George Caguana, a student, asked the graduating class about future plans, favorite school memories, and most beloved staff members.

Many seniors made their devotion to Judiann Carmack-Fayyaz, an environmental design and technology teacher, especially clear, thanking her for unmatched mentorship and empowering guidance over the years. While the class agreed over a love for Ms. Carmack-Fayyaz, they ran the gamut with regard to their paths ahead and the paths they forged at Bridgehampton.

Yaritza Huacon looked ahead toward a nursing degree, and Jaeda Gant, bound for the State University at Oneonta, looked back fondly on the middle school Shelter Island bonding trips. Jordan Gant said he was headed to the University of Albany for a computer science degree, and would always remember the senior vs. teacher volleyball game at the Christmas lunch.

James Gazda will be starting at Bentley University for business, David Simmons is headed to Ithaca College for film and photography, and Estefany Bonilla will be a new interior design student at the Fashion Institute of Technology this fall.
Gylia Dryden will pursue exercise science at the University of Buffalo, and for Melissa Villa, it will be education and special education at St. Joseph's College. Maile Buccigross is going to Suffolk Community College to study psychology.

Nicholas Saunders, who is bound for Rollins College in Orlando, will miss his basketball team, and Miles Clark, the salutatorian and soon-to-be Bates College freshman, said a robotics team trip to Quebec ranked up there among his top high school experiences.

The valedictorian, Zoe Lucas, said she was planning to pursue mathematics at Stony Brook University. Maydelin Ruiz Soto, who emphasized the value of her friendships at the school, looks ahead to getting to work, as does Christopher Rodriguez, who plans to do so at his father's side.

As it should be at any graduation, and especially a Covid one, the importance of family was a major theme. "Family members, the sacrifice and support you have provided your child has paid off," the Bridgehampton School principal, Mike Miller, noted in his opening remarks. "We are grateful for your infinite love, along with the tools you have equipped your child with."

Mr. Miller emphasized the tireless work of teachers and staff, but also made it clear that the "greatest gift in life, an education that opens doors that no one can shut," came down to a family making it possible.

Students sat in pods with their family members and Mr. Miller had them stand one by one as he read their responses to three prompts.

Responding to "One important aspect of my high school career that I will always cherish," students gave shout-outs to moments of triumph in stressful situations and moments of support from friends and family.

"Throughout distance learning and being at home, I have learned . . . " gave rise to mature lessons in patience and acknowledgements that the convenience of learning from the couch could never replace learning around people in person. "Social distancing was a protection, but it wasn't the norm," Zoe said in her valedictorian speech.

In tune with the familial theme of the ceremony "I would like to thank . . . " prompted an outpouring of gratitude to mothers, fathers, uncles, aunts, and more who showed up for their students, as well as to teachers who had been helpful to students that felt the stress of a language barrier.

The valedictorian called on the class of 2021 to remember that "taking small steps out of your comfort zone is essential for growth." Ron White, president of the Bridgehampton School Board, similarly noted, "Don't complain. Don't make excuses, make adjustments. Just adjust. Making adjustments is key for progression and success. Simply adjust."

Michael Donovan, who was part of IBM in the early days before making his own way in 1965 as a foreword thinker about computer engineering, touched on similar sentiments in his keynote speech. The donor of thousands of Chromebook computers during the pandemic to schoolchildren at Bridgehampton and beyond, said "America respects people who try and fail and pick themselves up and try again." He encouraged the students to be lifelong learners who held their family and friends close.

"Effort and self-improvement in your 20s pays off in spades for the rest of your working life," he said.

"Are you happy? Do you know what you need to be happy?" Mr. Miller asked, reminding the graduating class that activity in and of itself is not accomplishment, and that they are in control of their own happiness.

The graduating class earned $43,000 in awards and scholarships. Among the many prizes was an award for effort, character, and positive attitude, as well as academic achievement, from the Bridgehampton Teachers Association for Gylia Dryden.

The Bridgehampton School Superintendent Robert Hauser pointed out that there will be two kinds of changes in the graduates' lives going forward: change that they cannot control and change that they can control. He said that simple and small gestures on behalf of the community are important changes that young people can enact.

These messages flowed into Miles Clark's salutatorian speech. He noted that the words "we made it" had more to them than meet the eye. Specifically, the class had made it to this moment of change. "It's time to begin writing on a blank page we've only just discovered."