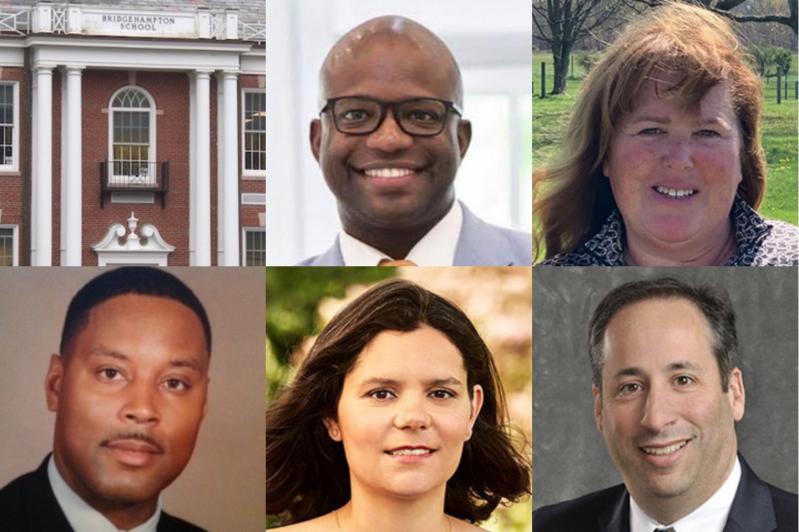 Three seats are up for grabs on the Bridgehampton School Board this year, with five candidates in the running to serve starting in July 2021 for three-year terms. The candidates are Ron White, Dwight E. Singleton, Jo Ann Comfort, Angela Chmielewski, and Michael Gomberg. Lillian Tyree-Johnson and Doug DeGroot, two longtime board members, are not seeking re-election.

Mr. White, the school board president, hopes to continue into a fifth consecutive term of service. "We're onto something," he said regarding his desire to keep up the board's efforts on the expansion project, nutritional education, academic rigor, and emotional welfare of each child. He believes the board has been fiscally responsible, and the budget for the coming year (covered separately on this page) promises a reasonable, transparent allocation of money.

Mr. White said his work with the First Baptist Church of Bridgehampton, organizing care packages for families during the pandemic, positions him well for re-election as someone who "shows love by trying to service the community." Bridgehampton's varsity boys basketball coach and an alumnus himself, Mr. White has been selling real estate for the past 18 years, now with Saunders and Associates. He has a first grader at the school and an 18-year-old who was educated there before going to boarding school.

Mr. Singleton said he is looking to see the diversity of the community reflected in the school district. He has master's degrees in business administration and adolescent education, holds a state certification as a business administrator, and is a former paid board member of the Army Corps of Engineers. He is a special education teacher assistant and athletic director for the Wyandanch School District.

"The current board has taken on a capital project renovating the school, so that was a challenge within itself to sell that to the public," he said. He expects that his exposure to building renovations and budgeting will offer stability during a time of change in the district, with an outgoing superintendent and the three board seats up for grabs. He said there are mixed reviews on the budget proposal owing to the size of the district and how much money is spent per pupil, but he believes "the total cost is within parameters."

Ms. Comfort, who was elected for one term in 2010, said she has always tried to teach her daughter, Uma, a junior at the school, to lead by example. She is a member of the reopening committee and the newly formed social-emotional and equity committee, and said running for school board is her next example for her daughter. Also part of the audit committee and a founding member of the Bridgehampton School Foundation, she said that on the board she would focus her energy on getting all students back to in-person learning.

"I feel the district may have spent more than they have in other years . . . during the pandemic; however it was all necessary in order to give our students the education they deserve," said Ms. Comfort, who called the proposed budget for next year acceptable.

Ms. Comfort and her husband run Comfort Farm on Lumber Lane. She has lived in Bridgehampton since 1995; her husband's family has since 1929.

For Ms. Chmielewski, it is her son in fourth grade and her daughter attending kindergarten who are inspiring her to run. She has lived in Bridgehampton for 10 years, and she hopes to build up student enrichment programs. Her strong communication skills, she said, will make her a good candidate.

She said she thinks that this year's board, "charged with reopening the school safely, alongside wrapping up the school construction," did a great job. While there were budget increases, she pointed out that the pandemic has increased costs for many schools. "Fixed costs associated with things such as insurance and retirement benefits, that are completely out of our control, also play a huge factor."

Ms. Chmielewski previously ran for a seat on the board in 2019. She is a real estate agent with Corcoran, for which she is a member of the firm's diversity and inclusion council, and she has volunteered with the Bridgehampton Parent Teacher Organization for the last several years. She has also served on the board of the Children's Museum of the East End.

Mr. Gomberg, who served on the school board from 2016 to 2019, said he is running "to help ensure that the district uses its many resources in the most effective way." With 25 years of experience in the financial industry as well as a background establishing the school's technology curriculum and special education program, Mr. Gomberg said he wants to continue that work by augmenting students' financial literacy and putting more emphasis on career readiness.

"With the amount of state and federal aid uncertain, some tough choices might have to be made." Regarding next year's budget, Mr. Gomberg said it would be "unfortunately necessary to pierce" the tax cap, and that "going forward, we need to get a better handle on the expanding costs." He has been a full-time resident of the hamlet since 2012. His two children have attended the school since 2013 and will be entering the eighth and 10th grades in the fall.

A virtual "meet the candidates" forum happens tonight from 7 to 8. A link is at bridgehamptonschool.com. The vote will be held at the school on May 18 from 2 to 8 p.m.