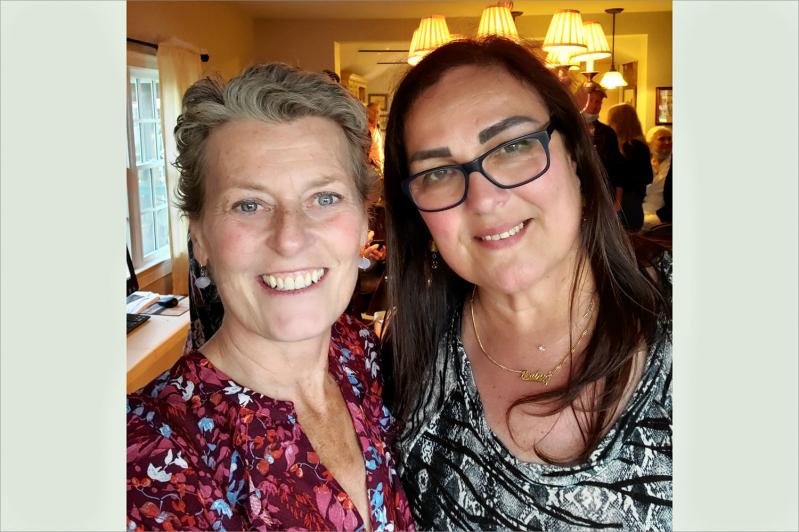 Joanne Goerler didn't want to retire in January from her teaching job at the John M. Marshall Elementary School, where she had worked since 1989, but she didn't really have a choice. The Covid-19 pandemic posed a life-threatening risk to her immune system, which had been compromised by a blood cancer called myelodysplastic syndrome, a surprise diagnosis Ms. Goerler received in the spring of 2018 after having some routine bloodwork.

Retiring "was the best thing at the time for me, given that my immune system was still suppressed," she said in an interview this week. "Had my health cooperated, I would have been there in a heartbeat."

Today, Ms. Goerler is on the mend thanks to a bone marrow donation from Beatriz Rodrigues, a Massachusetts woman who had signed up as a potential donor 22 years earlier when a young child in her own town was in need of a transfusion.

On Saturday, June 5, from noon to 4 p.m., the John M. Marshall Elementary School in East Hampton will host a bone marrow "swab drive" to attract people to sign up for a national donor registry. The goal is to "pay it forward" in honor of the match that helped Ms. Goerler overcome myelodysplastic syndrome.

"A stranger saved her life. That's hard to even imagine. It's an amazing concept," said Gina Kraus, a John Marshall teacher who is organizing the drive along with Laura Rosner, also a teacher there. "It's an opportunity to come together for something amazing — the possibility of giving a miracle to somebody else."

Participants in the June 5 donation event will undergo a simple cheek swab that takes about 10 minutes, explained Ms. Kraus, who sits on the board of directors of the Island Gift of Life Foundation. There will be a drive-through format, so participants won't even have to get out of their cars, she said. Those who are interested in taking part but cannot attend the swab drive can text "JMMES" to 61474 to receive a kit at home.

Ms. Goerler was surprised that Ms. Rodrigues, who is originally from Brazil, turned out to be a near-perfect match. In transplants of blood stem cells, there are 10 main genetic markers that doctors look to match up, and then there are two more markers that are optional but increase the chances a donation will be successful. Ms. Rodrigues and Ms. Goerler, with different ethnic backgrounds, shared 11 of the 12 total genetic markers.

"Obviously, science is bigger than either of us understand," Ms. Goerler said.

According to the organization Be the Match, which maintains a national bone marrow donor registry, each year about 12,000 people of all ages turn to the registry in search of a match. A Caucasian person has a 79 percent chance of finding a match, but people of color often have a harder time. "Unfortunately, half of these patients will not find the ideal match they need," the organization says. "More young, healthy donors of all races and ethnicities are urgently needed to help diversify the Be the Match registry."

In myelodysplastic syndrome (MDS), also known as "preleukemia," cancerous cells in the bone marrow force red blood cells out before they are fully mature. Ms. Goerler said the diagnostic biopsy was painful and her treatment was complicated by the diabetes and neuropathy that she later developed. According to the MDS Foundation, the disease often goes undetected. Each year in the U.S., as many as 20,000 people are diagnosed with a form of the disease, about three-quarters of them age 60 and above. For patients who do not receive a transfusion of blood stem cells, average life expectancy can range from between five months to six years.

Ms. Goerler, who lives in Cutchogue with her husband of 30 years, Ron Goerler, and four children, has been in remission since late last year. She now works part time at Jamesport Vineyards, which her family owns, and where she and Ms. Rodrigues met in person one year after the transfusion that has linked their lives indefinitely.

There was "a certain amount of relief, but bigger than just amazed, that some random stranger was willing to step up and give the gift of life," Ms. Goerler said. "She was so selfless to give of herself, especially to somebody she didn't know. It was definitely emotional, watching it infuse into me and drip down, waiting for life to grab hold again."

Hoedown on the Farm, Cocktails in the Garden
Main Beach Free Concerts in Final Weeks
Services and Counseling After Death of Popular Teacher Assistant
END_OF_DOCUMENT_TOKEN_TO_BE_REPLACED