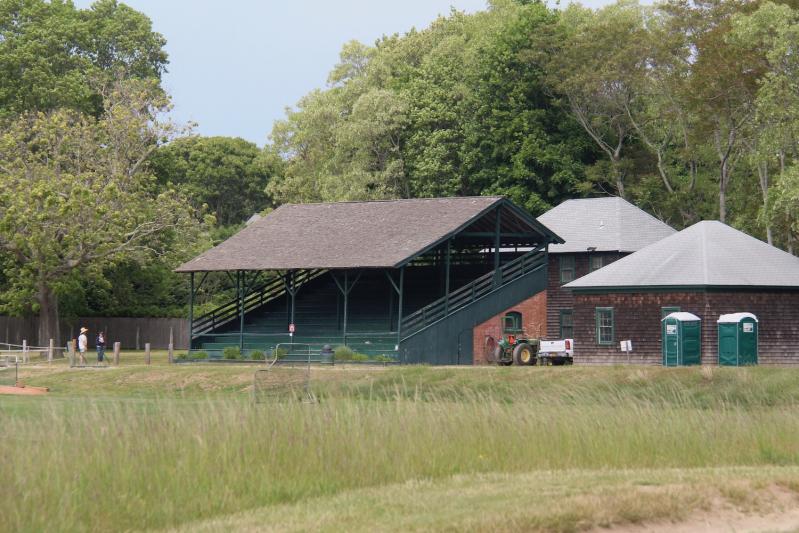 A new grandstand, backstop, and chain-link fencing at Mashashimuet's main baseball field are among the issues the Sag Harbor School District wants to see worked out before it signs a new contract for use of the park.
Durell Godfrey
By Bella Lewis

At Monday's Sag Harbor School Board meeting, residents were disappointed in the lack of compromise on a new contract between the district and Mashashimuet Park, illuminating the personal and practical reasons that an agreement on where to base student-athletes will be no walk in the park.

Parents urged the school board to continue negotiations and not give up on finding some kind of compromise with the park's board of directors. "I just implore you to keep all of your communication open," Nancy Hallock said, "and do everything you can to figure out a plan for school and park to keep all student-athletes at Mash Park."

Ms. Hallock said it was stressful for students to consider an alternative. One of her daughters, Lizzie Hallock, a sophomore, started an online petition that now has more than 800 signatures in favor of keeping Pierson sports where they have traditionally been.

Both Jeff Nichols, the district superintendent, and Gregg Schiavoni, the president of the park's board of directors, have said they are keen to continue discussions, though they differ on the park's suitability for student-athletes.

"A number of issues that the district thought compromised the safety of our students" need to be addressed ahead of any contract renewal, Mr. Nichols said, including a new grandstand, backstop, and chain-link fencing at the main baseball field.

Kevin Dehler, a middle and elementary school parent, echoed Ms. Hallock's concern, saying that in the last five years over $1 million in park expenditures have come from the school's reserve fund and gone toward work on the fields. He said he would like transparency as to the park's yearly figures, such as this year's: $211,000 paid in full even when sports were called off because of the pandemic.

"Landlords have responsibility," Mr. Dehler said. "The board of education is trying to get the park in a place where it's safe for kids. We would not lease a bus that was uninspected." He said he hoped that the same logic that the park board had applied to renovating the Mashashimuet playground, which was deemed dangerous, would be applied to the fields that the school uses.

Mr. Dehler suggested a collaborative effort, something like what had been done with the ice-skating rink in Greenport, where volunteers and local businesses were involved.

"We continue and have always continued to communicate with the park board," Mr. Nichols said, "and we've always been willing to consider options," as long as those options allow play in a way that is safe, as defined by the Suffolk County Health Department.

As to whether the community outcry will have an effect on how he will proceed, Mr. Nichols said, "I mean, obviously, in respect to the community's right to participate and express their feelings, their thoughts are always welcome. In terms of how I've approached it, our focus hasn't really changed since our primary concern has always been that the park is safe and up to standard."

He confirmed that the district has a backup plan should an agreement fall through.

Also on Monday, Jennifer Buscemi, the business administrator, touched on a higher-than-average budget surplus, pointing out in an email that "the district realized savings in many areas due to the pandemic. The savings are mainly in the transportation, co-curricular, and athletic budgets. There were also savings generated from having less in-person professional development and [fewer] events throughout the year and lower debt service interest payments because of the fall in interest rates and the district's high credit rating."

On the revenue side, the district received more tuition from nonresident students than anticipated.

"Any surplus funds at the end of the year will either be rolled forward to support next year's budget or deposited into legally authorized reserves to support future years' budgets and capital projects," she wrote.

In other news, the board voted to rent a tent, with State Environmental Quality Review Act approval, so the school could hold its June 22 prom onsite this year.

"We didn't really have the freedom to hold it at a facility where we could control the safety protocols," Mr. Nichols said.