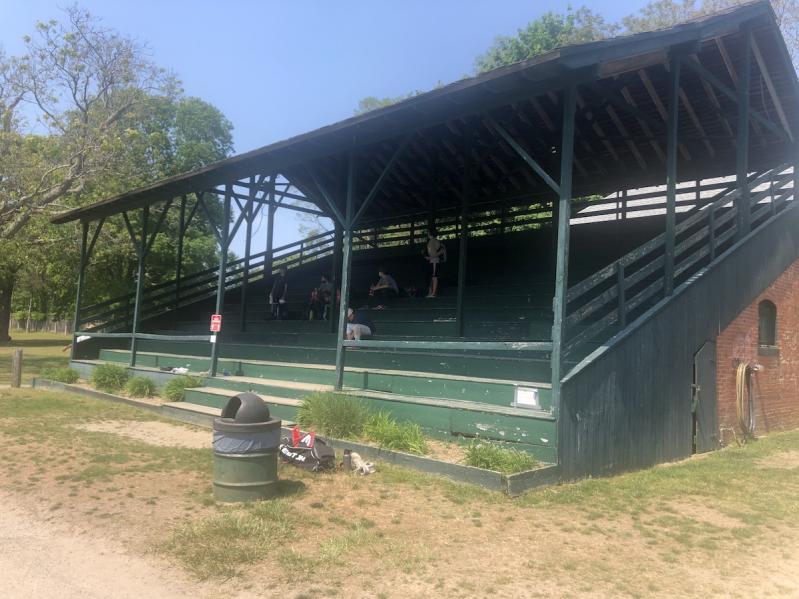 One can only wonder what Margaret Olivia Slocum Sage, Sag Harbor's greatest philanthropist of the early 20th century, might think of the newly emerged rift between two village institutions: the Sag Harbor School District, for which Mrs. Sage donated money to build what is now Pierson Middle and High School, and Mashashimuet Park, another one of her gifts to the people of the village.

On Friday, school district officials informed the management of the park that it would not renew a longstanding contract between the two entities governing the use of the athletic facilities by Pierson athletes and other district students. Jeff Nichols, the district superintendent, has cited safety and quality issues at the park's facilities, while Gregg Schiavoni, president of the Mashashimuet Park board of directors, has defended the park as safe and well maintained. The current contract expires on June 30.

Caught somewhere in between are the Pierson students themselves. One of them, Lizzie Hallock, a sophomore, started an online petition several days ago to urge the two sides to work out their differences so the students could continue calling Mashashimuet Park their home field while maintaining traditions there such as homecoming festivities. The petition now has about 400 signatures.

"I just hope that we'll be able to change the school's decision with the park. It's so sad to think we won't have our games there," said Lizzie, 16, who has been playing softball and soccer at Mashashimuet since she was very young. "The park is such a big part of the community. Looking through my parents' yearbooks, they did all their sports at the park too. I have never seen any safety issues."

A document released Monday by Mr. Nichols shows the district's proposal and the park's response. One sticking point appears to be that the school district had requested that the park "address" the aging grandstand at the main baseball field and the nonoperational bathrooms below it, but the park said it would not.

Mr. Schiavoni said Tuesday that it was just too expensive to do so at this time without additional money from the school, and he said the park board was planning to hold a fund-raising run in September to start work on the grandstand.

The school district pays Mashashimuet Park annually for the use of the fields. Mr. Schiavoni said that amount now stands at $211,000, and Mr. Nichols confirmed the district paid the park in full during the pandemic even though school sports had been halted. The park board proposed raising the fee to $215,850 in the 2021-22 school year, what would have been the first year of a three-year contract.

The school district preferred a one-year agreement and also proposed breaking it down into eight payments throughout the year that would hinge "upon the park keeping the fields, courts, bathrooms, and other space in acceptable condition" along with a long list of renovations and improvements.

The documents show that the park was willing to "groom and maintain fields for interscholastic play throughout the term of the agreement" at no extra cost to the district. It also was willing to add additional gravel to baseball dugout floors, clean the bathrooms daily, and either repair or replace a storage shed. Its renovations to the bathrooms at Field 5 were already underway, but the park said it would not consider fixing the bathrooms under the grandstand at this time. The park also said it would not restructure the bases at Field 5 and "scalp" the infield there.

The school district requested the installation of electrical outlets at some of the fields, but the park said it would consider that only if the district paid for the work and provided contractor quotes or estimates. The same condition would have applied to the main baseball field's backstop and chain-link fencing, which the district had on its "must do" list.

"I feel an affinity for the park," said Mr. Nichols, who recently toured the facilities twice, once with a group of parents and again with other school administrators. "I've worked in Sag Harbor for 20 to 25 years and I've watched a generation or two of kids playing in the park. . . . At the same time, we've got an obligation to look out for our students and make sure that the fields they play on and the facilities they use are up to standards and are safe for our students."

Mr. Schiavoni said he was shocked to receive an email from the district on Friday afternoon saying it had made other plans for most teams to practice and play at other places, including the sole athletic field at Pierson.

"I think everybody wants to try to work something out," Mr. Schiavoni said. "It's an agreement that's been in place for decades. . . . I don't think it's worth dismissing this easily."

Community members and parents took to Facebook in the last week to hotly debate the issue. Mr. Schiavoni said he initially read the posts, but has since turned his attention elsewhere. "Any reply is going to generate a reply which will generate a reply, and it's never going to stop. . . . Everyone says there are a lot of people supporting the park, and it's good for us, but in that sense, you can't just look at that. I have to also look at the negative — there are people who are not happy. You can't just say the good stuff is good and the bad stuff is made-up. There are some things that get lost in translation."

He denied an allegation that the park had used school district payments to renovate the basketball court and multipurpose play surface, which are used by the general public. "That is outrageous," Mr. Schiavoni said. "We did not use any of the school's money for those projects. We did it through fund-raising and we're paying off a loan."

Mr. Nichols said ending negotiations would cause a hardship, though not an unmanageable one. "There are not a lot of other spaces in close proximity to the district," he said. "It presents challenges if we don't move forward with the park, but our job is to articulate safety concerns to the park board and, in a respectful way, try to sign a contract that reflected our concerns. We were unable to do that and now our focus has to be on making sure that we secure fields to allow our students to play next year in the event that things continue the way they are at now."

"In my heart, I would like to continue discussions," Mr. Schiavoni said. "I would like to renew the contract, if not by July 1 then by the time the kids start their fall season at the end of August. Whether we can come to an agreement, we'll have to see, but my goal would be to work toward that."