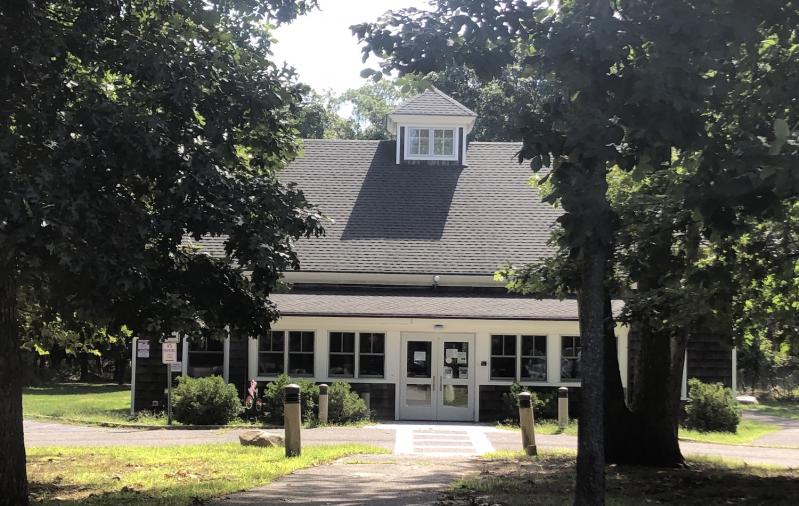 SCOPE and Just Kids, two well-established pre-K providers, will set up classrooms at the Springs Youth Association building behind the school next year.
Christine Sampson
By Christine Sampson

Major changes to the prekindergarten program are on the horizon at the Springs School, and they could have implications for parents of young children outside the district as well.

On Monday, shortly after the district received word from its construction manager and architect that the expansion and renovation project are proceeding well, the Springs School Board decided to capitalize on what will be newly freed-up space at the Springs Youth Association building behind the school next year to re-establish a pre-K program on campus.

The board voted 4-0 to sign contracts with SCOPE and Just Kids, two well-established pre-K providers that will set up classrooms at the youth building — meaning the district's three-year relationship with the Eleanor Whitmore Early Childhood Center in East Hampton Village will come to an end in June.

The Eleanor Whitmore Center had the capacity for 36 Springs children in its prekindergarten classrooms, and at one time was a complement to a similar program on campus at Springs. That on-campus program was eliminated last year in a cost-cutting and space-reconfiguring move. But this year, Springs found itself enrolling more students for the 2021-22 school year. Bringing in two on-site providers, including one that serves students with disabilities, will allow the school to serve more children instead of capping pre-K enrollment.

The buzz phrase is "universal pre-K," which refers not only to federal and state programs that offer financial support for schools that have prekindergarten programs but also to the movement that promotes early childhood education as a way to bridge achievement, health, and wealth gaps from generation to generation.

According to a policy statement from the nonprofit organization New America, which combines a think tank with a research institute, technology, a media platform, and other resources, children who attend robust prekindergarten programs "not only perform better in kindergarten, but are also less likely to be placed in special education, less likely to repeat a grade, more likely to graduate from high school, and even less likely to commit crimes. While universal pre-K can benefit all children, it has the largest impact on those from low-income and minority families as well as dual-language learners who are most likely to begin school already behind their peers."

"This board is all about equity," Springs School superintendent Debra Winter said Monday, "and I believe that by recommending both of these programs . . . we will have equity for as many as 48 universal pre-K students, plus students with disabilities."

SCOPE provided pre-K for Springs children from 2010 to 2018 at the Most Holy Trinity school building in East Hampton. Its base contract with Springs is $97,200 for the year. The base contract between Springs and Just Kids is $32,400. Together that makes $129,600, which is still less than the $162,000 per year that Springs was paying the Eleanor Whitmore Center. The SCOPE and Just Kids programs will be two-and-a-half-hour programs five days per week in either the morning or the afternoon, Ms. Winter said.

"We are still going to have a full-time pre-K classroom next year," Mr. Frazier said. "It won't be affiliated with any school district, but it will be available if a district wants to send their children. We have such demand for childcare in this community that we do have a waiting list for our other classrooms."

Mr. Frazier still expects to have children from the Sagaponack School and likely the Wainscott School among the pupils next year.

"We hate to lose Springs because we did like to be affiliated with a public school district," he said, "but most of the districts out here are moving toward full-day pre-K programs that are being housed on their campuses."