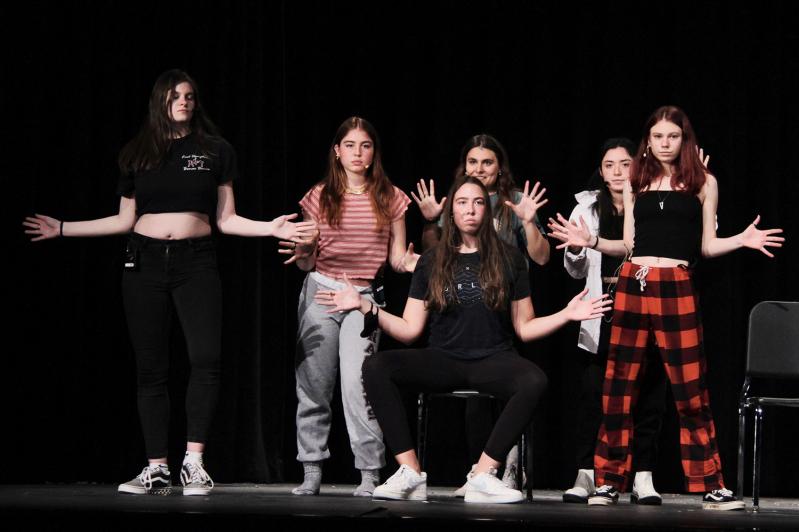 Students at East Hampton High School are busy preparing for the annual school musical, an innovative, nontraditional production this year because of Covid-19 restrictions.
Durell Godfrey
By Christine Sampson

The curtain rises Saturday on East Hampton High School's annual musical theater production, which is likely to be memorable for more reasons than one.

For "The Pandemic Pandemonium of 2021," East Hampton High School students wrote an original script to connect songs from various musicals. Fully half of the cast of 26 performers are members of the senior class. They will perform live despite the challenges presented by Covid-19, which has canceled almost everything else that students looked forward to over the past year and two months. And it's going to be the last production directed by Debbie Mansir, who is retiring in June after 17 years working at East Hampton High School.

"It's the end of an era. This will be a very interesting musical to go out on because it represents so many different eras and styles of musical theater," said Kevin Chabla, a senior for whom "Pandemonium" is his third production with East Hampton, and who was nominated for a Teeny Award last year.

"It feels amazing," said Erin Cadger, a senior who has been in eight school musicals since her days at the John M. Marshall Elementary School, and who will study music in college next year. "I thought we weren't even going to get to do something like this. It's senior year, and it would have stunk if we couldn't do it."

Aiden Cooper, also a senior who has appeared in the musical nearly every year since elementary school, described Ms. Mansir as "inspiring."

"She is the best, basically. It's really nice that I got to spend the majority of my musical theater experience with her," said Aiden, who scurried from a playoff golf match at 5 a.m. to school and then lacrosse practice before finally arriving at rehearsal on Monday.

In 2020, East Hampton High School was one of only a few East End schools that produced a full-on musical. "Hello, Dolly" finished its run just a couple of weeks before Gov. Andrew M. Cuomo closed schools because of the burgeoning pandemic.

This year, each student will be able to have only two guests in attendance for the lone performance, at 7 p.m. Saturday, but the show will also be live-streamed for general audiences.

The hybrid format "was really student-motivated," Ms. Mansir said. She had told her students to "draw up a proposal, take it to the principal, and have a discussion with him."

She directed high school shows for most of her 17 years here; she also spent six years at the helm of the middle and elementary school musicals, taking a break only when she was battling cancer. Musical theater "truly is a love -- you have to love it or else you'd pull your hair out," she said.

Producing "Les Miserables" two years ago was a dream come true for Ms. Mansir, who in June will take down and pack up all of the school theater posters she has tacked to the walls of her office. "It was so powerful. I think we were one of the first high schools on the eastern end of Long Island to put it up. That was the first year I went back to do it after my bout with cancer. It meant a lot."

Max Eberle, a senior, called Ms. Mansir "the soul behind the show," and Allie Schumacher, also a senior, said she "is amazing — such a good leader. She's great at what she does. I'm so glad I got to have her as a director."

Also retiring in June is Troy Grindle, a music teacher and department coordinator who has been with East Hampton for 32 years and who has overseen the shows' pit orchestra for . . . well, a long time. "I've lost track of how many years! I really couldn't tell you," Mr. Grindle said Tuesday. "It has been a really great journey. I've learned a lot myself, and I hope I've been able to share what I've learned with the students in a way that helped them grow through the experience of being part of a school musical. It allowed me to connect with an even wider range of students and support that part of the performing arts."

The plot of "Pandemonium" starts with two narrators, called Gilbert and O'Sullivan, who are backstage managers. Having lost his partner to Covid-19, and mirroring the darkness of Broadway during the pandemic, the elder O'Sullivan takes the young Gilbert under his wing to talk about theater and share his knowledge. The anecdotes are told in song -- mostly small group numbers instead of large ensemble routines, to comply with Covid-19 protocols.

The audience can expect selections from shows like "Grease," "A Funny Thing Happened on the Way to the Forum," "Chicago," "Anything Goes," "Beauty and the Beast," "Mary Poppins," and, of course, "Les Miserables."

The students said this format has both similarities to and differences from a typical musical production. They have had less time to prepare, but the script is short.

"The time in which we have to prep is harder, but over all, I think it's a little bit easier," Aiden said. "I don't have 100 lines to remember."

Nicole Seitz and Andrew Merkert are the students who wrote most of the script, and Silas Jones and Anika Petruccelli did the choreography. Julianna Lester is stage manager, overseeing a crew consisting of Keshi Mayer, Emma Stein, and Oceana Zeledon. Dante Sasso is the student lighting designer. The other seniors involved in the cast are John Henry Kernell, Sarah Baylinson, Ethan Stein, Lilia Schaefer, Megan White, Hannah Hartsough, and Aubrey Peterson.
Jayne Freedman serves as assistant director, Amanda Jones as vocal director, and Karen Hochstedler as the accompanying pianist.

John Henry, who overcame a lot of stage fright over the years before taking on the leading role of O'Sullivan in "Pandemonium," said that while the show feels different, the camaraderie of the cast remains a uniting force.

"Everyone's here for the same thing," he said. "It's a real community."