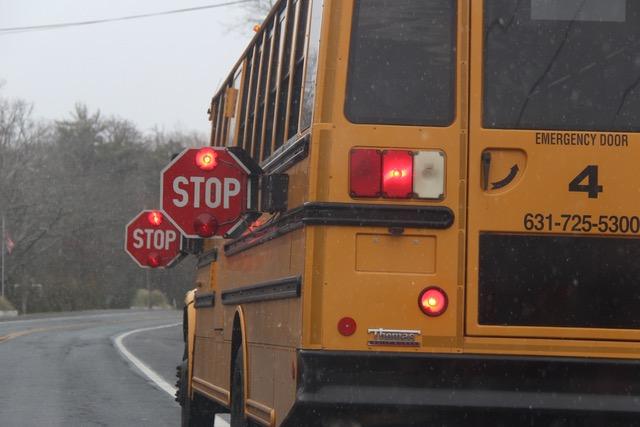 The stop-arms of school buses in districts throughout Suffolk County are now equipped with cameras.
Durell Godfrey
By Bella Lewis

Saturday marks the launch of Suffolk's Stop-Arm Camera Program, which will outfit fleets of school buses across the county with technology to enforce a law commonly violated by drivers: that they stop for stopped school buses with flashing lights.

A release from Suffolk County Executive Steve Bellone last week explained that there has been a 60-day period of public service announcements to adequately warn drivers leading up to the program going live. It was unanimously adopted by the County Legislature with bipartisan support.

"People need to know that when they see the stop arm of the school bus extended and the lights are flashing, those cameras are recording the activity outside of the bus," said Seth Turner, the Amagansett School District superintendent.

Part of the appeal: All upfront installation costs and maintenance of the stop-arm cameras are covered by BusPatrol, the main tech provider for bus safety, said the county executive's office.

Moreover, through 6,000 upgraded Suffolk buses, every child across all 48 school districts that opt in to the program will be protected. With the aim to deter drivers from illegally passing school buses, the cameras are able to book motorists by identifying license plate numbers.

"Anything that helps the safety of our students on buses," is a good thing, said Rich Burns, superintendent of the East Hampton School District.

Mr. Burns said he thought the initiative was overdue, though "we were lucky in a way because we have more of a rural community," making it easier to note drivers abusing the situation, even without cameras.

Still, danger is prevalent especially with students as young as kindergarten and first grade getting on and off the buses. Using a violation rate model, Suffolk County found that children are threatened by up to 8,100 violations per day or 1.4 million per school year, its website noted.

"This program will save lives. It has taken more than two decades to become a reality. Springs School was one of the first schools on the East End to ensure their buses had cameras," said the district's superintendent, Debra Winter.

The modernized buses in the BusPatrol partnership will include Cloud-connected stop-arm and safety cameras that function in variable weather conditions with 4G LTE connectivity, A.I.-assisted technology, 4K and 180-degree coverage, and anti-vibration technology.

"We are hoping this new program will support our efforts in creating safer bus stops for our schoolchildren," said East Hampton Town Police Chief Michael Sarlo. "Obviously, we can't follow every school bus on their daily route, and we regularly receive complaints from the drivers and the school administrations about passing of stopped school buses. Anything to improve safety on our roadways, and help protect our schoolchildren is a win-win."

A driver's first stop-arm violation usually means a $250 fine, and in New York State, any violations thereafter within 18 months of the initial infraction are subject to a $25 penalty, up to $300 maximum.

According to Suffolk County, data from other safety programs demonstrate that 94 percent of first-time offenders do not receive a second ticket. Especially promising, considering the stop-arm technology, is that that 95 percent of drivers do not dispute their ticket after watching a playback of their unsafe maneuver.