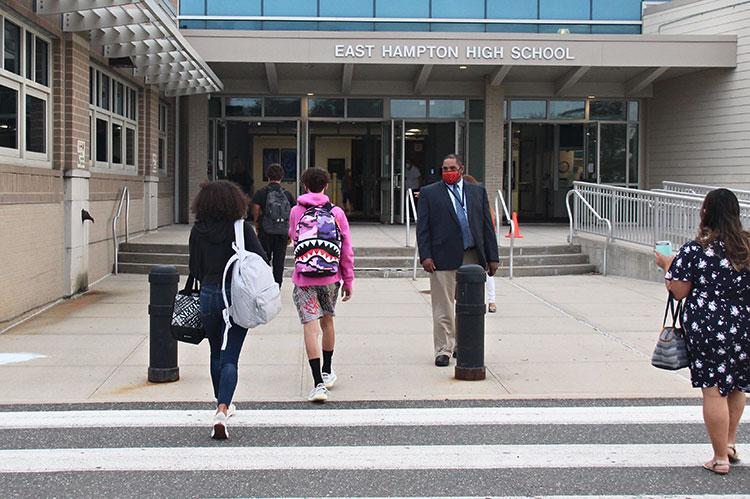 The East Hampton School District's proposed 2021-22 budget reflects "normal fluctuations" in spending along with planning for the future, a senior school official said yesterday. East Hampton district voters will see a $75.16 million spending plan on the May 18 ballot that also considers the possible continuation of Covid-related needs.

East Hampton's proposed budget carries a year-over-year increase of $1.28 million and stays within state-imposed limits on tax-levy increases. That number comes in at 2.87 percent, the maximum it could raise without needing a supermajority of voter approval in May. It differs from the "2-percent tax cap" that many people are used to hearing about because of factors unique to East Hampton, including bustling real estate development within the district and the level of debt the district has incurred. Mr. Fine said that piercing the cap "was never a discussion."

"Over all for us now is refocusing and moving ahead," he said. "This year was the status quo and just trying to get through it. Moving ahead, looking at our programs is definitely a priority."

The "normal fluctuations," he explained, result from examining short-term needs and shifting money accordingly. According to a line-item budget released Tuesday, there is more money budgeted for the teaching of reading, math, and special education, but slightly less for music and art, English as a new language, science, and social studies.

"One year you might need 40 new instruments in band," Mr. Fine said by way of example. "We had a lot of money for professional development, which we didn't use, obviously. We used that money to attend to other things. A lot of [it] might be put into summer school. We're not increasing the budget -- we're just moving to cover additional costs where the need is. . . . This year there's going to be a big, big need in summer remediation."

That was one outcome of Covid-19, a trend that other school districts are also seeing. Another is continued preparation for the unknown with regard to the pandemic.

"I think it's important to know that we were able to navigate the end of last year and this school year with so many unknowns," said J.P. Foster, the school board president. "We adapted and stayed within the budget. A lot of that is thanks to the staff, administrators, and parents for having some understanding."

With the new commercial teaching kitchen at East Hampton High School nearly complete and the new transportation hub on Springs-Fireplace Road solidly underway, Mr. Fine said there are no other major projects on the table at the present time. The district also does not need to buy any large buses this year, he said. It is planning to deposit $2.9 million into a capital reserve account dedicated to future repairs and renovations.

"We’re starting to prioritize. Our tennis courts have to be replaced, and we have to do some work in the high school auditorium at some point," Mr. Foster said. "It's like your household budget. In five years you might need to replace your roof or in two years you might need a new boiler. It's along the same lines -- just on a bigger scale."

East Hampton will give an additional boost to its school lunch program, from $10,000 up to $30,000. The district is also prepared to increase its contribution to the South Fork Behavioral Health Initiative by $10,000, up from the $5,000 it usually spends.

"This district as a whole has targeted mental health and bringing it to everyone's attention," Mr. Foster said. "It has widespread support."

Mr. Fine said the budget sets East Hampton up for future financial health. "That's a huge, huge thing," he said. "You cut too deep, you put yourself in a situation with the tax cap."

Taxes will rise by an estimated $80 per year for a resident whose house has an assessed value of $6,000, which translates to a fair market value of about $1.03 million based on East Hampton Town's 2020 assessment.

The East Hampton School Board will hold a public hearing on the budget on Tuesday at 6 p.m. A link to the live-stream, with a call-in number for public comments, is typically posted on the district website at easthamptonschools.org. In-person voter registration is on May 11 from 8 a.m. to 4 p.m. in the district office. Voting is in-person on May 18 from 1 to 8 p.m.