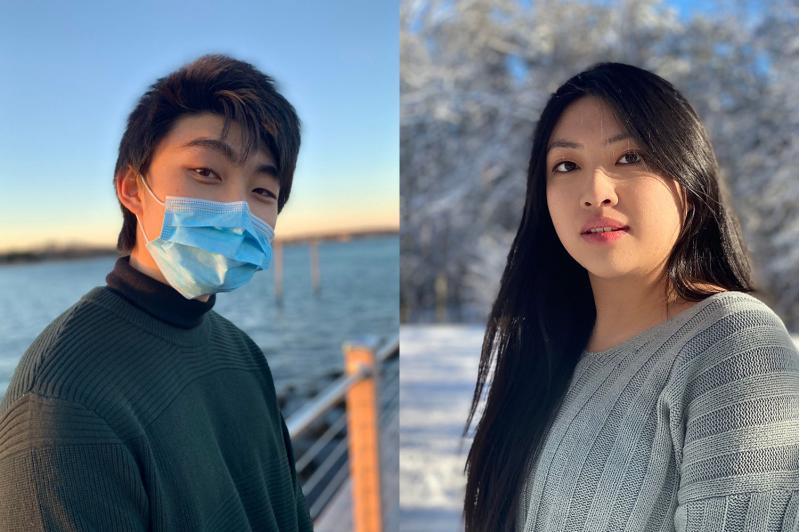 Andy Quan, left, and Sudsuda Sananikone are Ross School students who spoke out this week against casual racism and anti-Asian hate crimes.
By Christine Sampson

Around the same time the news broke that eight people, including six women of Asian descent, had been killed on March 16 at two spas and a massage parlor near Atlanta, Chihana Kashiwabara was learning in her 11th grade history class at the Ross School about racism toward Asian and Asian-American people -- starting with xenophobic propaganda toward immigrants in the late 19th century, the internment of Japanese-Americans during World War II, and onward.

"Since I've never experienced such hate crimes, I was not really thinking about racism. I didn't know there was a long history of anti-Asian racism," Chihana said. "I also learned that from this event."

Chihana is a boarding student who happens to live in a house with girls from seven different countries, which she said is a fun experience. "We learn a lot about different cultures, but when we are playing around, we are just like the same," she said.

A surge in hate crimes and discrimination toward people of Asian descent has been identified over the year in which a United States president repeatedly referred to the novel coronavirus as the "China virus." And while police officials in Georgia have declined to attach race as a motivation in the recent shootings, there's no doubt in the minds of many — including some East End youth — that that was the case.

"It honestly didn't hit me at first, the significance of the crimes and how it pertained to me," said Alex Makoid, a senior at Pierson High School.

Alex was born in Wuhan, China, and came to the United States before she was 2 when her parents adopted her. This school year, she and a classmate, Nicole Chen, started the Asian Culture Club at Pierson. The topic of violence has been on their minds.

"Growing up in a mostly white community and having non-Asian parents sometimes leads me to forget that I am Asian. When it finally dawned on me that not only was another minority group being targeted, but a group I belonged to . . . I was devastated."

Nicole agreed. "It is very disheartening to see the amount of hate that has been surfacing recently. It is disturbing to think that you could just be going about your day but then have someone spontaneously attack you for something you have no control over. The shooting, specifically, was very appalling to me."

Sudsuda Sananikone, a senior at the Ross School who is also called Sue, said she was also shocked by the killings. "I just didn't know that the hate against Asians would get this bad," she said. "As an Asian woman myself, I might be more careful. . . . I'm really worried about my parents and grandparents, not just in America but in other parts of the world."

California State University's Center for the Study of Hate and Extremism — which speaks to the pervasiveness of racism by the nature of its existence to begin with — reported earlier this month that hate crimes had been on a downward trend over all in America's 16 largest cities, except when it came to Asian cultures. Violence against Asians rose about 150 percent, the researchers said in a report that preceded the March 16 tragedy in Georgia.

There's also the issue of casual normalized racism, in which people not of minority cultures "don't realize they're actually being racist," Nicole said. "It has always been brushed off by people as a joke. I've seen people use this excuse both in real life and on social media, and when people try to speak out against it, they are never taken seriously. Instead, they are told to 'lighten up' or take a joke."

"It has not done anything to knock me down, but sometimes when I sit and evaluate comments or events after they have happened, I realized how much our world needs to change," Alex said.

Di Quan, who is also called Andy, agreed that the issue of casual racism is pervasive but often subtle. He called out a recent article about a Covid-19 vaccine developed in China, which appeared in The New York Times, that reinforced stereotypes about Asians with respect to how animals are used in medicine.

"I feel like there's still not enough awareness and this is largely due to the fact that platforms such as Google and others really suggest to you more of what you like based on algorithms," said Andy, a senior at the Ross School who lives locally with his family.

He said he uses his social media channels for positive interactions that help break cultural barriers.

Sue called for more awareness and teaching of the issues in the American education system.

"There hasn't been enough on anti-Asian sentiments," she said.

At the Ross School, which has a significant number of students of Asian descent, Chihana, Andy, and Sue all said they feel safe while at the same time able to speak freely about race and diversity. And at Pierson, Alex and Nicole said the atmosphere is inclusive but not all that diverse.

"I truly believe that facing what is happening and uniting to actually implement change is most important," Alex said. "This year has been a big year, ranging from climate change, to the #MeToo movement, to Black Lives Matter. Needless to say, all of those topics are important and deserve every bit of help and support to continue spreading awareness. I am, in a sad way, glad that this issue of Asian discrimination is surfacing. It has never really been addressed before in such a large-scale way."

Philippe Cheng, a photographer and father of two who lives in Bridgehampton, is from a different generation than Alex, Nicole, Chihana, Sue, and Andy. He said that as a man of Chinese and French-Canadian heritage he has not experienced overt discrimination in his 20 years living here. "I would suspect, anecdotally, that younger people have experienced it a lot more."

"It goes back to the issues of complexity of race," Mr. Cheng said. "You can't paint it with a broad brush. Each ethnic group comes to the table with their own history."

He was pleased to hear that these young people were speaking out about the need for more awareness and understanding of race and ethnicity. "As a culture, as a country, as a world, we all need to be much more fluent in that language."

A Reminder From PSEG About Digging
Petition to Speed Up Sand Replenishment in Montauk
Artistic Portraits of M.L.K. Up for Auction on Saturday
END_OF_DOCUMENT_TOKEN_TO_BE_REPLACED