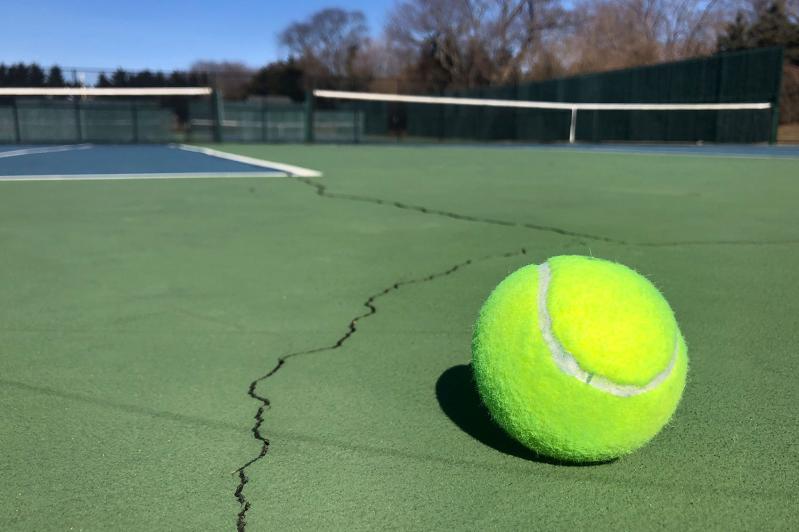 The East Hampton High School tennis courts are on a list of campus facilities that district officials are hoping to upgrade, though the money has not yet been formally included in the general operating budget.
Christine Sampson
By Christine Sampson

In a pandemic environment that has cost the school district more than $600,000 so far, and against the fiscal pressure of New York State's cap on tax levy increases, East Hampton school officials are holding the line on budget increases wherever possible as they develop their 2021-22 school spending plan.

The tax cap "is part of the issue," said J.P. Foster, the school board president, after Tuesday's budget workshop. Cuts to classroom supplies, equipment, and conferences and training for staff members are necessary this year "in order to keep us under the cap and still maintain the level of education that we've had," Mr. Foster said, "but the board is not going to cut anything that is needed."

On Tuesday, board members and administrators weighed shaving off pieces from budget lines for athletics and physical education and for English as a new language. The former will see an overall reduction of about 1 percent, down to $1.08 million, while the latter will see about a 16-percent decrease, down to $39,297.

"We're making do with what we have, and doing really well," said Elizabeth Reveiz, who will retire in June from her position as director of the English as a new language program.

The $7,331 decrease for that department comes even as East Hampton as a district has record numbers of students enrolled in bilingual programs. There were 106 new students this year, as opposed to an average of 75 in past years, Ms. Reveiz said. The district's total of 461 "English language learners," as they are known, includes 67 students who have aged out of the school district but who are still eligible to receive language-related services for two years.

Compounding the situation, she said, was the fact that the district received less state grant money for immigrant students this year than it had in the past, but the district's programs are still okay financially.

In the athletics and physical education budget, there is still $28,000 set aside for replacement equipment for the high school fitness center and for new wrestling mats, but there is less money for new uniforms. Joe Vasile-Cozzo, the athletic director, also told the school board that several campus facilities, including the high school tennis courts and track, the junior varsity softball field, and a storage shed, need significant overhauls.

"We have Band-Aided them for a couple of years now," Mr. Vasile-Cozzo said of the tennis courts.

However, none of those items has been officially added to the budget yet. Richard Burns, the district superintendent, said there would be further discussion on those items as possible capital projects. The district's facilities committee was to have met this morning to review them.

East Hampton has not released an overall budget number yet for the 2021-22 school year, but Mr. Burns has previously said the district will not have to try to override the tax cap.

Noticeably absent from the budget discussion Tuesday — and from East Hampton's previous budget workshops this year — was any talk of laying off teachers or other staff members. Salaries and benefits, which were presented to the board in February, are not included in the individual departments' budget lines.

"Until we find our way in this new environment, we need to take a step back and see where we are," Mr. Foster said. "Our goal is to keep it under the [tax] cap but provide the best education we can and not take away from the kids."

The special education department was the only area discussed this week that would see an overall increase. There would be a bump of about 5 percent, up to $1.97 million. Cindy Allentuck, the director of special education, said it would likely be needed because there's a good chance that at least one high-needs student will enroll in the district. It has happened seven times within the 10 years that Ms. Allentuck has been at East Hampton, she said.

On the subject of pandemic expenditures, Mr. Foster said the approximately $600,000 incurred so far is still less than what Covid-19 will ultimately cost the district. He explained that the money came from "a shuffle" between projected costs that never materialized — field trips, new sports uniforms, many extracurricular activities — and the actual virus-related costs.

"It keeps changing, and we won't know what it is until the year is over," he said. "That's a real number that can come back and bite you, but we didn't have a choice. . . . It's more repurposing than anything else — we're doing what we need to do with the funds that we have. It was all very unexpected."

There remains just one budget workshop left on the schedule for East Hampton, and it may be combined with its next regular school board meeting on Tuesday. LTV will live-stream the meeting on YouTube starting at 6:30 p.m. The board will need to finalize its budget in mid-April and hold a budget hearing in early May. The vote is Tuesday, May 18.