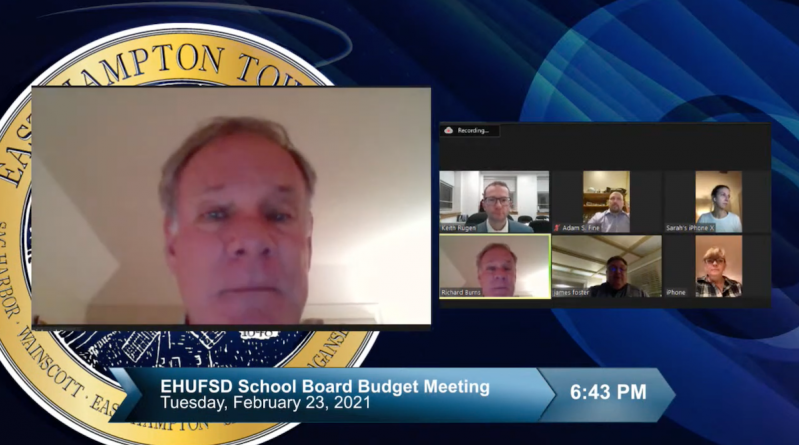 Richard Burns, the current superintendent, announced that plans are in the works to bring back more students for in-person classes.
By Christine Sampson

During a budget workshop this week, Richard Burns, the district superintendent, said there will be a detailed discussion of the plans at a regular board meeting on Tuesday. It will begin at 6:30 p.m. and will be live-streamed on YouTube by LTV. There will be an opportunity for community members to call in comments.

"I want the board to be involved in the discussion, and please be ready with your input for trying to get more kids back in school," Mr. Burns said. "I think we're at that point. We've been talking to our medical team, the administrators. There's been a lot of discussion going on behind the scenes and I think we can do it safely."

Up for debate on Tuesday will be whether East Hampton should establish a four-foot social distancing protocol between students, rather than the six-foot distance now in place.

"We have plastic barriers, we have masks, we've dealt with the ventilation system. The weather will be warmer," Mr. Burns said.

Charles Soriano, the East Hampton Middle School principal, wrote in an email to families on Tuesday that his goal is to "have middle schoolers return to school, especially given cases coming down and lockdowns around the country being relaxed. This is welcome news."

At present the middle school, along with the high school, has most students on a hybrid plan in which they attend school in-person two days per week, either Monday and Tuesday or Thursday and Friday, and two different groups alternate in-person on Wednesdays. A small population of students, including those with greater academic needs, are already back five days per week.

"In looking ahead, I am anticipating that any rollout would be strategic," Dr. Soriano continued. "We would likely prioritize grade eight students first (to allow us to see how it's working), followed by grades six and seven. We would continue to offer the options of full-remote for those families who are not comfortable with being in the building."

J.P. Foster, the school board president, implored the public to be patient. "Give us our first board meeting in March. I think we'll lay things out to the best of our ability at that time," he said.

Dr. Soriano joined Karen Kuneth, the elementary school's interim principal, and James Crenshaw, the high school principal, in explaining on Tuesday that their respective budget proposals comply with a districtwide mandate to cut spending on supplies by 20 percent next year.

The instructions came from Mr. Burns, Adam Fine, the incoming superintendent, and Keith Rugen, the assistant superintendent for business. They said it was based on the fact that so many items were not used this year and have been held over for next year — including "consumables" such as art supplies — so they do not have to be reordered.

During the discussion, Jackie Lowey, a school board member, made it clear that the district would find money for supplies in certain subject areas if it was truly needed. She told Ms. Kuneth that "you should have as much art money as you need for your kids."

Ms. Kuneth pointed out that continued cuts to supply budgets in the future would not be sustainable. But for now, she said, "I felt comfortable making that decrease because I think there needs to be an entire re-evaluation of the supplies that have been put in storage."

Over all, the budget proposals for East Hampton's three campuses have been reduced slightly from what they were this year, the principals each said.