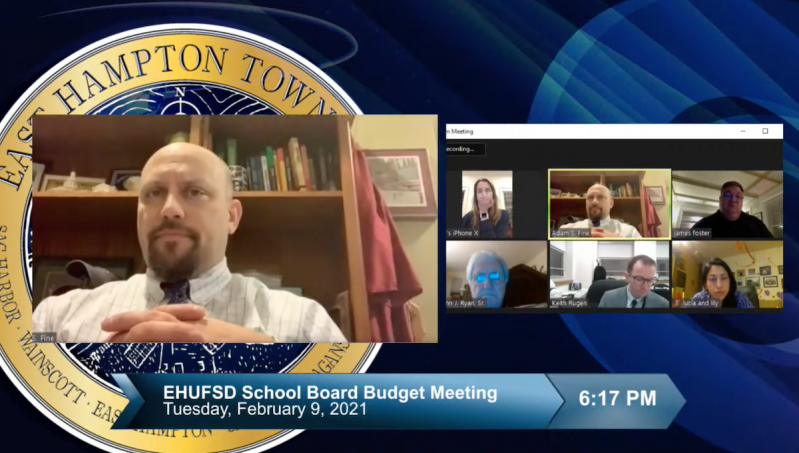 With the pandemic still upending normal life, East Hampton School District officials have made it clear they are taking seriously the mental health and academic needs of their students, quite literally putting their money where their mouths are.

During a budget workshop on Feb. 9, officials committed to setting aside more money for the South Fork Behavioral Health Initiative, which is at risk of losing its state funding because of Covid-19-related budget gaps. Whereas East Hampton has budgeted $5,000 per year in the past, it is preparing to add another $10,000 to maintain the resources provided by the Family Service League.

Normally, state officials call money for the South Fork Behavioral Health Initiative "a slam-dunk," said Adam Fine, East Hampton's incoming superintendent, but "this year it came, obviously, with a level of hesitancy." State money for a corresponding program on the North Fork is also in jeopardy. The state usually sets aside $175,000 for mental health in each region.

"With everything that's going on, mental health should be the thing that's funded," Mr. Fine said.

"That’s the last place that I’m willing to cut," said J.P. Foster, president of the East Hampton School Board. "I’m hoping the state comes through, but if you look back at history, whenever there’s tough times, it’s one of the first things that gets cut . . . I definitely, definitely do not want us to cut that."

Mr. Foster said the district should consider increasing that budget line even more.

Mr. Fine said families can most likely expect a ramped-up summer school program and other enrichment options to help students make up for in-school learning losses. Richard Burns, the current superintendent, described the need as "more exposure to direct instruction."

Mr. Fine said the district did not need to add more money for those needs, meaning that the $220,200 budget for summer school will remain the same.

During the meeting, Keith Rugen, East Hampton's assistant superintendent for business, said the district expects to spend about $514,000 more on benefits for current and retired employees in the 2021-22 school year. Among the different benefits, such as retirement contributions and medical and dental insurance, some are rising and others are falling, he said, but the overall increase is 2.9 percent, up to $18.4 million.

The district has committed to staying within the state-mandated cap on tax-levy increases in the coming school year, Mr. Burns said. East Hampton has not yet made public an overall budget figure because "some of the numbers are really fluid at this point," he said.

Mr. Burns, who will retire in June, also drew attention to a recent Newsday article detailing Gov. Andrew M. Cuomo's executive budget for schools. The district-level breakdowns show that East Hampton would receive a 7-percent increase in state funding, up to $3.96 million. However, because of the new ways New York State is handling certain types of school aid, such as the category corresponding to the School Tax Relief program for homeowners, the numbers are misleading, local school officials have said recently.

"When you look at the hard numbers, that really is not the case," Mr. Burns said of the purported increase in state aid. "We don’t significantly depend on state funding, so we're okay that way."