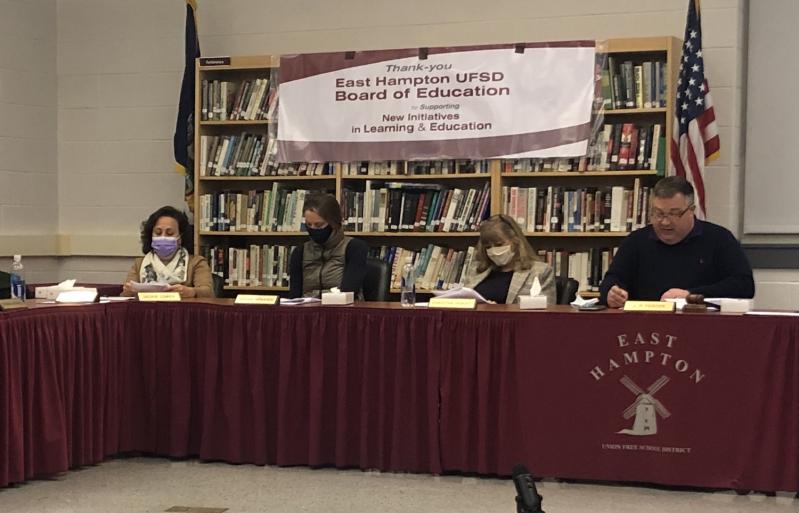 "The fact is, I think it’s needed, and it needs to be figured out and revisited," J.P. Foster, right, the East Hampton School Board president, said of a past plan to build affordable housing on a 40-acre parcel in the Wainscott School District.
Christine Sampson
By Christine Sampson

The East Hampton School Board, which has been conducting an assiduous search for “affordable and attainable” housing options for school teachers and other employees, urged the town on Tuesday to bring back a past plan for such a development on a 40-acre property off Stephen Hand’s Path in the Wainscott School District.

Schools across the South Fork have been having trouble attracting and retaining teachers and other staff members, who often resign after a year or two — or less — because of long commutes and compensation that cannot keep pace with the cost of living here, even though those salaries are usually well above national and state averages.

“It’s not going to be popular. Times change,” J.P. Foster, the school board president, said during Tuesday’s board meeting, which followed a public forum on the housing crisis held last week. “It’s a 40-acre piece of property and we won’t build on it because we don’t want to change? The fact is, I think it’s needed, and it needs to be figured out and revisited . . . I’m not saying you have to build on all 40 acres, but let’s do something.”

His board colleagues agreed. “It’s a great spot, and there’s lots of land. It should be considered,” Sandra Vorpahl said.

Wainscott officials and residents of that hamlet had vociferously opposed the project and pressed the town board to turn it down, arguing that it could cause overcrowding at its two-room schoolhouse, which has a capacity of 24 students.

The proposal, for 49 units of various sizes that would have been built in conjunction with Windmill Housing, was officially abandoned in late 2015. When another housing proposal emerged in 2019, for town-owned land on Route 114, also in the Wainscott School District, district officials mailed a flyer to residents of the hamlet asking, “Is the end in sight for the Wainscott School?”

David Eagan, president of the Wainscott School Board, responded yesterday to Mr. Foster’s comments: “I’m a little surprised that a president of a school board would advocate recommendations that have potentially adverse impacts on neighboring school districts.”

Mr. Eagan, an attorney who closely follows matters of land use, suggested that East Hampton could instead “assume that property into that [school] district.”

“I believe the East Hampton School District has capacity in its schools — which Wainscott does not,” Mr. Eagan said. “Wainscott would be more than happy to support that move under New York law . . . We are against any development that would adversely impact the operation of our school. If this property was put into the East Hampton School District, it would be a win-win.”

“I wouldn’t rule it out as a potential site for some housing,” Mr. Van Scoyoc said yesterday. “There have also been quite a few discussions about the future of the [sand] pit in Wainscott, some 70 acres. . . . With the crisis the way it is, we’re going to take a hard look at anything that’s on the table.”

Also on Tuesday, the East Hampton School Board resolved to reconfigure an existing committee dedicated to policy to include a focus on housing options. Jackie Lowey, a board member, recalled that Town Supervisor Peter Van Scoyoc had pledged the issue was going to be a top priority in 2022.

The policy committee “could then be our little way of reminding ourselves to meet to talk, and then feed into the town process. We’ll invite other school districts to join us as well,” Ms. Lowey said. “Peter said this is going to be front-and-center. We want to be an asset.”

The school district will also support a proposition on next November’s ballot to create the Peconic Bay Community Housing Fund, Mr. Foster said. Gov. Kathy Hochul has signed the legislation, which was developed by State Assemblyman Fred W. Thiele Jr. to mirror the community preservation fund. Subject to voter approval, it would add a half-percent tax to real estate transactions above a certain threshold; the goal is to create a pot of money for housing programs.

“They’ve got to pass it,” Mr. Foster said. “It’s got to be something that’s plausible to the Town of East Hampton.”

Sarah Minardi, another school board member, said the suggestions made last week by Lee Silberman, executive director of Habitat for Humanity of Suffolk County, should also be considered. Mr. Silberman had said his organization could easily scale up its pace, but needs more land to build its houses, which are available to selected homeowners for a down payment of just $3,000.

In other school news, the board voted 6-0 Tuesday to add a separate proposition of its own to next May’s school ballot, asking to create a new reserve account dedicated to emergency repairs to the school buildings and other facilities.

If it is approved by voters, the district would be able to set aside a maximum of $5 million over a 10-year time period dedicated to “fixing things that break,” Mr. Foster said. “It’s really good budgeting and forward thinking, in my opinion.”