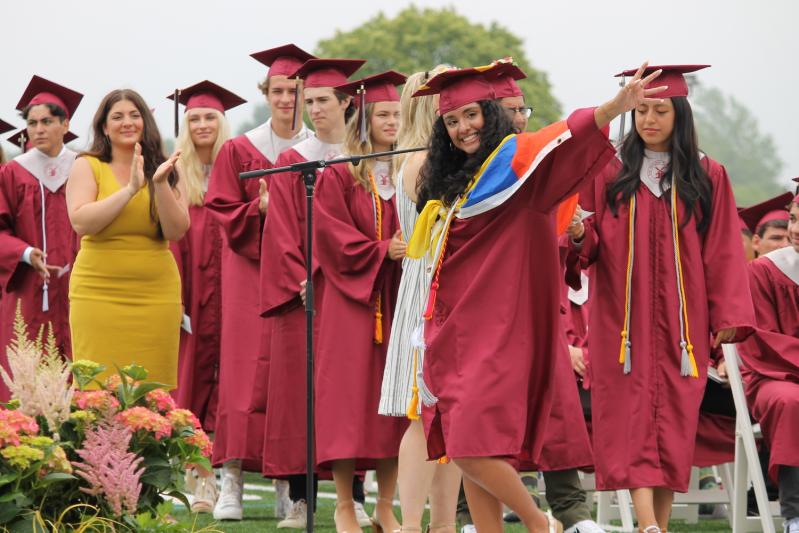 Some of East Hampton High School's 2021 graduates. In East Hampton and other local districts, graduation rates over the past two years largely held steady despite the challenges of a sudden shift to online learning and the onset of serious social isolation.
Christine Sampson
By Christine Sampson

What had been an anticipated dip in high school graduation rates brought on by the Covid-19 pandemic across the United States largely did not come to pass in school districts on the eastern end of the South Fork, data from the last two school years show.

A report released in October by America’s Promise Alliance, which aims to “create the conditions for success for all young people,” along with the Johns Hopkins School of Education and other organizations, showed that in the school year immediately predating the pandemic, the national four-year graduation rate reached an all-time high of 85.8 percent. However, it predicted that the pandemic “could jeopardize gains” in the future.

But in East Hampton, Sag Harbor, and Bridgehampton, graduation rates largely held steady or even increased despite the challenges of a sudden shift to online learning and the onset of serious social isolation.

Here the four-year graduation rates hovered between 80 and 87 percent between 2015-16 and 2019-20. The higher end of that range came in the 2018-19 school year. In the 2019-2020 school year — interrupted in mid-March by the arrival of Covid-19 on the South Fork — the four-year graduation rate dropped to 83 percent, still three percentage points above the New York State average. In the 2020-21 school year, preliminary numbers show that around 90 percent of graduates finished high school in four years.

The prior years’ data reflect breakdowns by demographic, taking into account special education status, G.E.D. completion, dropouts, students still enrolled, and other types of classifications. Last year’s data has not yet been broken down in the same ways, for instance with regard to special education students and non-native English speakers.

Where Mr. Fine saw the largest pandemic influence was the group of students for whom English is not a first language, called English language learners. They often graduate in five or six years because state rules allow them to attend school and receive support for that amount of time. Even before the pandemic, students in this group often moved around from school to school, which affected graduation rates.

In 2019, for example, 19 percent of English language learners finished high school in four years. That figure rose to 21 percent in 2020; data for 2021 was not yet available. And during the pandemic, Mr. Fine said, when many families lost sources of income, some students in this group chose to enter the work force rather than attend classes remotely.

At Pierson High School in Sag Harbor, state records show that four-year graduation rates ranged from 86 percent to 97 percent during the four years leading up to the pandemic. In 2019-20, the rate was 89 percent, and in 2020-21, it was above 98 percent.

“We have pretty focused families in terms of trying to do the best they can in school and meeting the standards” for graduation, said Jeff Nichols, the superintendent. “I think we start off with a really good group in terms of their motivation and aspirations, and beyond that, like any school, we have programs in place to try to help students who are struggling. Unfortunately, that doesn’t address all of the situations, because we do have students who don’t meet the graduation standards. Thankfully, it’s not often.”

East Hampton also adds resources to help kids in danger of not graduating. “Socially and emotionally or academically, we offer a lot — study skills, extra English language learner support — all of those programs are inclusive for any of the students in the building,” Mr. Fine said.

What complicates things for some East End schools is that classes are often small compared to UpIsland districts. At Pierson, there could be 60 to 75 kids in a grade. In East Hampton it’s usually in the low to mid 200s. During the last several years at the Bridgehampton School, the senior class enrollment has run the gamut from 4 to 14 or 17 students.

Because of that, Mr. Nichols said, it’s hard to tell exactly how the pandemic has affected graduation rates. “We’re dealing with so few students, so over the years we’ve always been very careful to not draw too many conclusions from a specific year,” he said. “When you have a cohort size of 65 or 70 students, two or three kids with unique situations can impact your statistics. We look for patterns over time, and if there’s something that’s an issue, we’ll try to tackle it.”

Another metric that East Hampton uses to measure growth is the rate at which students are graduating with an advanced Regents diploma, indicating they have received high marks on a certain number of end-of-year exams. For some time it was on the rise in East Hampton, going from 39 percent in the 2015-16 school year to 46 percent in 2019-2020, before dropping to about 42 percent last year.

“Our goal is to really make that robust. It’s about college and career readiness,” Mr. Fine said.

He said that with the hiring of a new principal, Sara Smith, he hopes to elevate both the advanced Regents diploma rate and the overall graduation rate.

In Bridgehampton, four-year graduation rates ranged from 81 to 92 percent from the 2015-16 school year to 2018-19. In 2020, the rate was 86 percent, and early data from 2021 show it was 100 percent. However, school officials said the small cohort sizes mean big year-to-year fluctuations that can change even when a single student does not graduate or stays enrolled for one or two more years, as is often the case with special education students or English language learners.

Mary Kelly, the district superintendent, and Michael Cox, the assistant principal and director of data and instructional services, said the state’s reporting system appears to “penalize schools” if a student graduates early or does not graduate in four years. “We don't have issues with dropouts, historically speaking, at the Bridgehampton School,” Mr. Cox said.