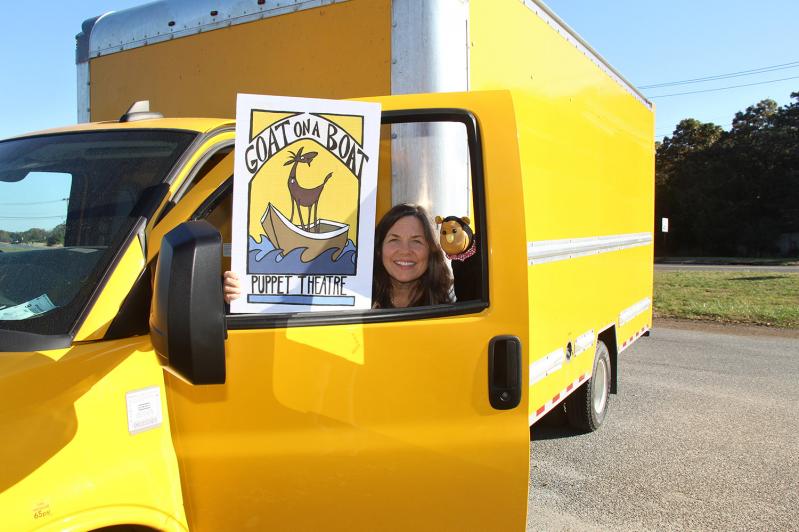 Liz Joyce, the founder of Goat on a Boat Puppet Theatre and the A Couple of Puppets performance company, has big plans for her theater on wheels, which she calls her “puppet truck.”
Durell Godfrey
By Christine Sampson

Right now there’s a bright yellow, 16-foot box truck, a GMC Savanna, parked at Liz Joyce’s house in Sag Harbor. Its license plate says “PUP TRUCK,” and Ms. Joyce has big plans for it. She calls it her “puppet truck.”

The founder of the nonprofit Goat on a Boat Puppet Theatre and a performing arts company called A Couple of Puppets, Ms. Joyce is getting ready to launch new programs in the spring. With help from fellow puppeteers, she’ll be able to take the show on the road to bring the art of puppetry to a wider audience.

“We have so much on the East End. We’re so blessed — endowed,” she said. “There’s so much wealth and culture here, and the idea is that we’re going to export some of that and share it with neighborhoods who don’t have as much of it.”

Ms. Joyce is already working with groups such as the Islip Arts Council on locations where the mobile performance studio could be put to good use. She’s upgrading the truck’s safety features after a donor provided $20,000 for the truck itself. Now comes another challenge.

“We are raising $15,000 for our retrofit,” she said. “The thing about it is if you have a box where you’re storing puppets and materials and all that stuff, it gets wet. We need climate control and insulation and electricity and a generator. We’re making a rolling, moving venue, and that has to be self-sufficient.”

Coming up, then, will be a formal appeal for donations through the end of the year, particularly on Giving Tuesday — the Tuesday after Thanksgiving, when people are encouraged to make donations of money or goods as they start their holiday shopping. And in May there will be a grown-up puppet show to celebrate Goat on a Boat’s 21st birthday.

“If anybody gets any emails or mailings from us, please consider it,” Ms. Joyce said.

New board members have infused the organization with a fresh energy and expertise in grant-writing and fund-raising, and Ms. Joyce has connected with other performers, including Heather Van Velsor Thorgersen of the company Think Big and Robin Holder of Neuma International Arts of N.Y., both of whom are based in Suffolk.

“The uniqueness of the traveling puppet truck is that it will allow us to impact our local communities by providing programs for children in areas that would otherwise never see shows like what we provide,” said Ms. Holder, who has a background in musical theater, children’s television, and education. “We provide what I call ‘edutainment,’ a combination of education and entertainment, as well as feel-good programs for both children and their families. We are corky and hilarious, and children have responded well to our shows. I am excited to partner with [Ms. Joyce] to bring this into fruition.”

Ms. Joyce compared the puppet truck to a turtle carrying its home on its back. “It’s exciting, and it’s fun,” she said. “You do something for 20 years, and if you’re an artist, you have to keep it fresh. It has to keep changing and satisfying my soul because I’m pouring all the love into it. I love what I do — what a gift to be able to share it.”