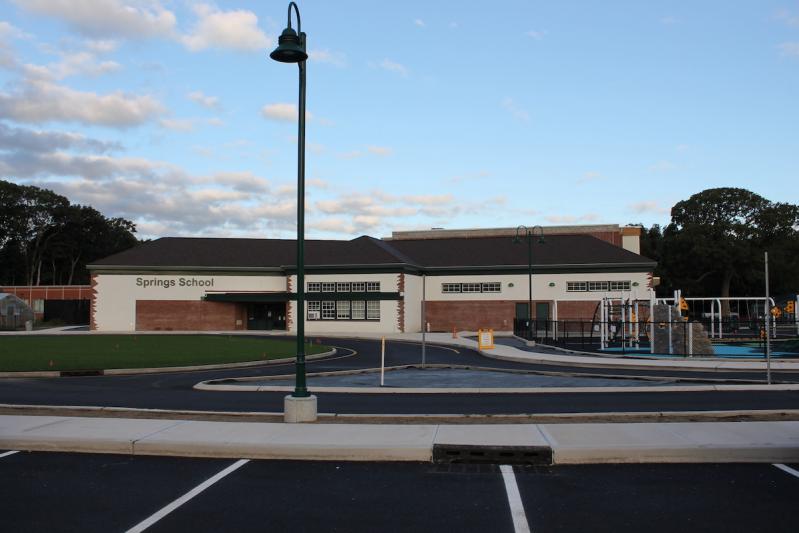 Small sums are adding up to big worries at the Springs School, where a major construction and renovation project has been getting glowing reviews from many people amid its final stages of work.

On Monday night, however, "many" did not include the members of the school board.

School officials said that in recent months, due to human error when the plans were being developed by BBS Architects, and to unforeseen situations as the work progressed, Springs has faced thousands of dollars in extra costs. These so-called "change orders," which require school board approval, occur whenever expenses deviate from the original estimate.

This week's issue was a $9,284 change order to remove two pieces of brand-new playground equipment that the district's insurance company declined to approve, because they operate on spinning mechanics that have led to dizziness and other issues. That amount would also include repairing the new rubber surface after those two pieces of equipment are removed, and additional safety netting.

Also problematic was a $9,980 change order for an overhaul of the new telephone system that was installed over the summer. The phones are not defective, administrators said; rather, they are simply not the right ones needed for communicating with teachers in their classrooms. They attributed that to human error as well.

The question over who would ultimately be responsible for these costs is the "elephant in the room," said Dave Conlon, a board member who was one of two voting against the additional spending on Monday. "We should be approving BBS taking these deductions. I don't understand why this has to come out of our budget."

"They made the mistakes. We didn't," agreed Pat Brabant, who also voted against the change orders, and who joined Mr. Conlon in urging the administration to take legal action.

However, litigation is often both costly and lengthy -- and Springs has to think of the students' well-being, said Tim Frazier, the board's vice president.

"The sooner we get that taken care of, then it's not a health and safety issue," Mr. Frazier said. "If you want to litigate it right now, it stops everything . . . it could take months."

School board records show that on Sept. 20, the board approved spending $3,099 for additional electrical infrastructure. On Aug. 23, the board approved spending $42,056 more on fencing and another $4,502 for the electrical work. On June 28, an emergency school board meeting was called specifically to approve a landscaping change order for $39,029.

Since March, records show that there have also been at least six other change orders that relied on "allowances" already built into the construction budget, which anticipate normal fluctuations and unexpected situations. However, all of this spending chips away at whatever money might be left over for additional building repairs and "wish list" projects that the district could not initially fit into the budget.

Debra Winter, the district superintendent, suggested the errors were made by an unnamed architect with BBS who is no longer employed at the firm. BBS could not be reached for comment by press time this week.

"We are not alone in this shortage," she said. "This is nationwide."

She said the school is also waiting on signs and street markings that will help clear up confusion over the morning "car line," the prolonged student drop-off system, which was restructured this year. Mr. Conlon suggested the double-yellow lines and newly painted arrows together serve to confuse parents. Ms. Winter said the district had done what the Police Department and engineers had recommended, but Mr. Conlon said, "I think you still need to look at this. It can't be the end of that."

The district is also grappling with brown grass and flooding in various places on the new athletic fields, attributing it to improper watering times -- including during gym class, when students recently found themselves dodging sprinklers -– and to grass cut too short, poor drainage, and possible root rot below the new sheaths of sod.