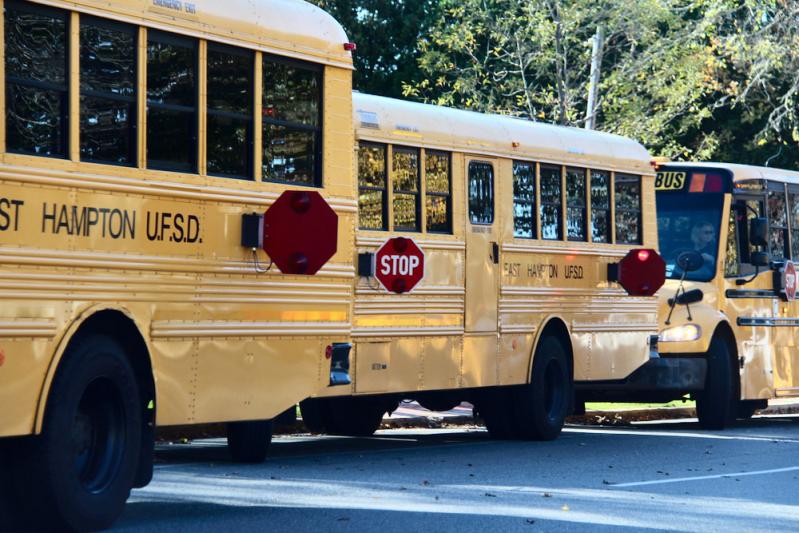 Parents and children can expect the experience of riding the school bus to be different in light of Covid-19 -- if, that is, they take the bus at all.

Most South Fork school districts are reporting that bus ridership will be down as more parents choose to drive their children to school themselves. And unlike in the past, when every child who qualified for transportation was automatically assigned a place on a school bus, most districts asked families to specifically opt in to transportation this year.

Of the approximately 500 East Hampton School District families who previously used buses and replied to the district's recent transportation survey, 70 percent will use buses this year, Mr. Burns said.

And, whereas standard school buses could fit two or even three children to a seat in some cases, "we're confident that we'll be able to have one student per seat at this point in time" in masks and socially distanced, he said. "We don't see numbers that will prohibit us from doing the routes that were established."

At the Bridgehampton School, fewer than 50 percent of the children will ride the buses, down from about 50 percent last year. Robert Hauser, the superintendent, explained that the district recently switched its reopening plans, based on parent feedback, so that there will only be one student per seat; originally the plan was to have two children per seat.

"We contacted each parent directly to ask if they would be transporting their children themselves or taking the bus," he said last week. "A lot of people are still undecided. I think people want to know and see what is the protocol on the bus."

The Montauk School District is limiting bus ridership to 22 students per vehicle -- whereas the normal capacity is at least double that -- and there will be "window seats only" with the windows open, said Jack Perna, the Montauk superintendent.

However, he said, most of the school's 335 children will be driven to school by parents or guardians.
Important for families to know is that school reopening plans dictate in almost every case -- the exception being some students with disabilities -- children will have to wear masks on the bus. And in many districts, children's temperatures will need to be taken before they get on the bus, either by a bus monitor or by a parent. Children who register a high temperature will not be permitted to board buses, which also means that for the youngest children, a parent or guardian must be present to walk the child back home from the bus stop.

The Bridgehampton School will use the Montauk Bus Company this year after its longtime transportation provider, McCoy Bus Company, did not bid on the district's contract. Mr. Hauser said the new contract has enough flexibility that buses can be added and routes can be altered in case more students opt in to transportation later on.

McCoy has served the Montauk School District for decades. Neither bus company responded to requests for comment by press time this week.

Students at the Springs School must also opt in to transportation, according to Debra Winter, the district superintendent. She said during an Aug. 31 school board meeting that there will be extra time and staff labor costs associated with an increased number of people in the "car line" for drop-off and pickup of students each day, as staff will be taking students' temperatures before they are allowed into the school building.

The Sag Harbor School District, which maintains its own bus fleet and provides most of the transportation for the Wainscott and Sagaponack School Districts, did not respond to a request for comment by press time this week.