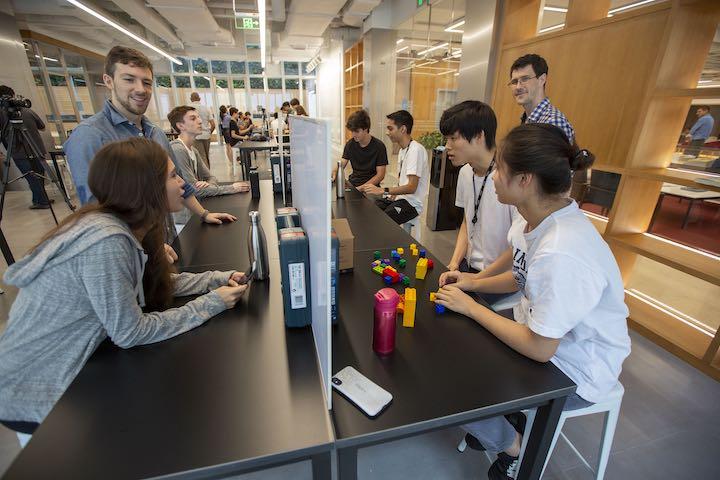 Avenues: the World School, a for-profit independent school, is enrolling students for the school year beginning in fall 2020 for a new “studio campus” in the East Hampton area.

A school spokesperson confirmed Monday that Avenues is in the process of “actively working” to secure a physical location for the school.

“The number of students and the grades offered will be determined after we finalize our location. We will need a minimum of 3,500 square feet,” Tara Powers, global director of communications for Avenues, said in an email.

The East Hampton campus website says it is accepting students in 5th through 11th grades. Other locations have children in kindergarten through 12th grade. The school is also hiring a “learning experience designer” for East Hampton.

According to its website, Avenues offers a curriculum based on “intensive reading and extensive making,” referring to great works of literature and hands-on projects, along with discussion and problem-based math. Students also learn languages, choosing from among 50 options. They partner with mentors to create flexible weekly schedules, and much of the learning is accomplished through an interactive, mobile academics platform.

Tuition to Avenues in the 2019-20 school year was around $56,000, according to The Real Deal, which also said the school “has been credited with boosting home prices” in West Chelsea, the New York City neighborhood where it is situated. Among its famous students is the daughter of the actors Katie Holmes and Tom Cruise.

“We chose the Hamptons for our new studio program for two main reasons,” Maggie Wollner, who will head the campus here, explained in an email. “First, there are a number of families that previously lived in the city and attended Avenues before relocating to the Hamptons. They have been hoping we could find a way for them to continue schooling with us. Second, because it is in close proximity to our New York campus, it is ideal for starting this new concept. Since Covid-19, we have increased interest from current Avenues families as well as others who are considering all or part of next school year there.”

Ms. Wollner said she loves that the curriculum is “truly interdisciplinary and rigorous” and that it enables students to become critical thinkers and creative problem solvers.

“One part of the program that might be particularly impactful is the opportunity that all students will have to co-design a long-term project in an area of their choosing with support from a mentor faculty member,” she said. “We’re committed to supporting our students in finding areas of passion and purpose.”

Avenues also says each of its students is admitted to all campuses, which are in New York City, Sao Paulo, Brazil, and Shenzhen, China, in addition to online.

“All Avenues campuses share the same mission of developing world-wise leaders uniquely equipped to understand and solve global-scale problems,” Ms. Wollner said. “As a World School, our goal is to engage students in learning experiences that enable them to develop and exercise a global mind-set. As a Studio campus, one of our main goals is to build relationships and make meaningful contributions within the local Hamptons community.”

Avenues was established in 2012 by Alan Greenberg, a communications executive, Benno Schmidt, a former president of Yale University, and Chris Whittle, an education expert who has a house on Georgica Pond here. Mr. Whittle and Mr. Schmidt were previously partners in the Edison Schools, a charter school company. Mr. Whittle has ended his relationship with Avenues and now has campuses for his third private school venture, the Whittle School and Studios, in Washington, D.C., and Shenzhen. A Brooklyn arm of Whittle is expected to open this fall.

The East End is already home to a few private schools, including the Hayground School in Bridgehampton and the Ross School in East Hampton.

“I think it will appeal to the same parents and kids that are impressed with the Ross School,” said Marcelle Langendal, the faculty chair of the Hayground School.

Andi O’Hearn, head of advancement and operations at the Ross School, said the school is aware of Avenues’ intention to open in East Hampton. She pointed out that there is “a limited number of spots” for students at Ross, and said, “We believe strongly in who we are and recognize the need for collaboration, not competition, in these difficult times.”

“Ross, a not-for-profit independent school, has served the community for over 25 years educating not only local students but students from all over the world. . . . The world-class curriculum has proven itself time and again as witnessed by outstanding college acceptances and, more importantly, successful graduates who are making a difference in the world,” Ms. O’Hearn said. “The Ross community welcomes all who choose to live here and to educate their children here.”