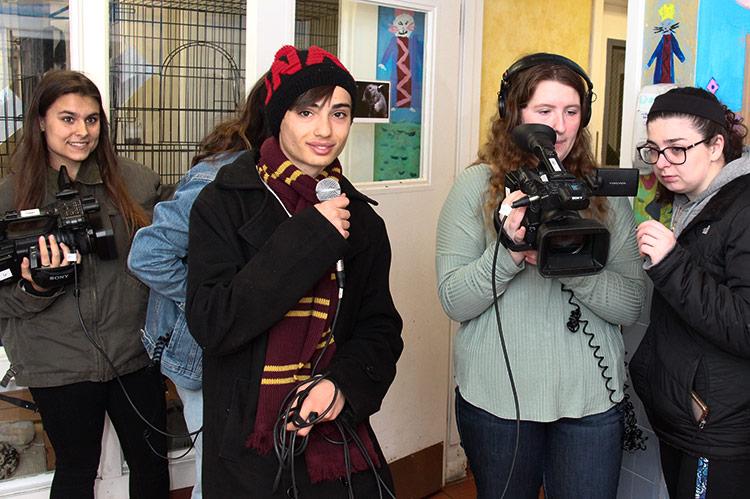 On a career shadowing day last Thursday, East Hampton High School students, including Megan White, Max Eberle, and Ella Grenci, worked on a public service announcement for the Animal Rescue Fund of the Hamptons alongside professionals like Danielle Koyles, at right, Ellen Watson of LTV, and Durell Godfrey of The East Hampton Star.
Durell Godfrey
By Christine Sampson

A revived focus on career and technical education, new ways to demonstrate mastery of the skills that come with it, news literacy, and financial competence emerged as ideas for possible updates to high school graduation requirements last week during a public forum convened to examine just that.

They were often in agreement that the current standards for earning a high school diploma are rigorous — perhaps too much for students with disabilities or limited knowledge of the English language — but by and large they have not caught up with the skills and knowledge needed for modern careers, college attendance, and civic life.

We have to “think bigger,” some said, and “break out of the box” of 9 or 10-period school days, honors classes tracking, and the number of Regents exams needed to graduate.

Educators said the current system is one in which students constantly ask their teachers, “Is this going to be on the test?”

“I think we’re agreeing that we’re not preparing them very well for the real world,” said Scott Muller, an assistant principal at Walt Whitman High School in South Huntington.

Cindy Allentuck, the director of pupil personnel services for the East Hampton School District, said she was encouraged by the direction of the conversations she heard. As someone who oversees special education here, she said she and her colleagues are frustrated with the current certificate of completion that their students earn. The system perpetuates inequality among a vulnerable population, she said.

“They learn how to fill out a job application, do an interview, talk on the phone — all life skills — but then they’re getting out of school with something that is not a diploma,” Ms. Allentuck said. “You can have a student who drops out of school and comes back and gets a G.E.D., and that’s still a diploma.”

Both special education and general education students as well as those just starting to learn English could benefit from a greater emphasis on hands-on learning, she said.

Some said volunteer service should be an important part of teaching kids about civics, as should experiential and project-based learning such as the types of tasks that Boy Scouts and Girl Scouts take on when they achieve Eagle Scout and Gold Awards.

“What Regents exam could ever test that?” Mr. Muller said.

A big part of civics, many agreed, is news literacy — meaning an understanding of how best to absorb news and information, and how to discern accurate and reliable information from false or misleading statements. Howard Schneider, a former Newsday editor and reporter and the founding dean of Stony Brook University’s School of Journalism, was at last week’s forum to emphasize the importance of news literacy for youth.

“I can’t think of a more urgent competency than students’ ability to be able to judge the reliability of information and news,” Mr. Schneider said by phone on Monday. “Without that ability, they’re not going to be able to make informed decisions about their own lives and about our collective life. . . . My message is we have to find a way to make sure that news literacy is a piece of the new requirements for every single graduate.”

Mr. Schneider is working with several Long Island schools to implement a news literacy curriculum. For instance, he said, the Plainview-Old Bethpage School District, with about 5,000 students, has a program that starts in the seventh grade and extends to 12th grade in the English and social studies classes.

Financial literacy was also a popular topic. Many said understanding banking concepts like loans, interest, budgeting, saving, and investing is just as important as learning algebra, if not more so.

If the trend is moving back toward vocational education, then the East Hampton and Bridgehampton School Districts appear to be headed in the right direction. Bridgehampton has a unique agricultural diploma program and classes in the culinary arts that culminate in students taking county food-handling exams. East Hampton is building a commercial kitchen and an automotive facility that will house career-training programs.

The meeting last week took on a hotter tone toward the end, when a handful of vocal parents stood up to chide state officials for taking too much time to make changes. David Wicks, the ESBOCES superintendent, had said the state would take its time — about two more years — in making a final decision.

Those parents also called for an immediate “decoupling” of the Regents exams from state graduation requirements, saying that kind of high-stakes testing caused anxiety among their children.

Shannon Tahoe, the interim commissioner of the New York State Education Department, said that while the state’s “diploma requirements have been the gold standard over the last century,” it makes sense to re-evaluate them periodically.

“This is not something we’re taking lightly or rushing into,” she said. “At the heart of the discussion is this: We need to ask ourselves what we can do to improve opportunities for all children to be successful.”

Ms. Allentuck said she is excited to see how the conversations play out over the next two years. “This is the first time that you really got the hope that they are really listening.”