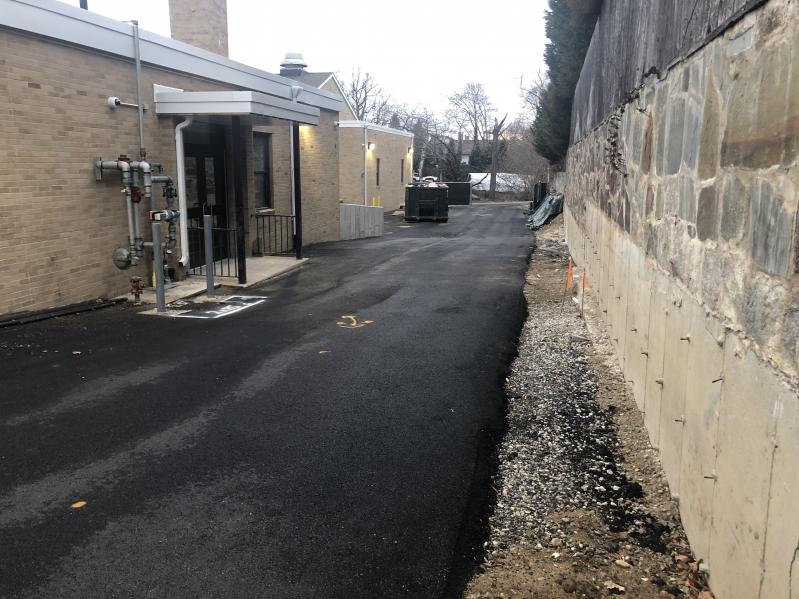 The road has been repaved behind the Sag Harbor Learning Center, though still visible are bare stretches where soil and an aging retaining wall were removed to make way for a new wall.
Christine Sampson
By Christine Sampson

Brandon Broderick, a geologist and the president of a company that tested soil at the Sag Harbor Learning Center, put to rest school board members’ worries over arsenic contamination during a Jan. 27 meeting of the board.

J.C. Broderick and Co. found 17.5 parts per million of arsenic in one of two soil samples taken at the renovated school building, formerly the Stella Maris Regional School, which the Sag Harbor School District bought from the Catholic Diocese of Rockville Centre in 2016. According to Mr. Broderick, the average arsenic content of soils in New York State is 16 parts per million.

The elevated sample was taken from 300 tons of soil removed from behind the building, where there used to be a retaining wall constructed out of pressure-treated wood. The other sample, which showed 2.64 parts per million of arsenic, was taken from a pit dug for a new elevator shaft at the school.

Neither concentration, Mr. Broderick told the school board, is cause for concern. There is no mandate to remediate the soils; rather, he said, the soil had to be removed because the district did not intend to reuse it at the school.

“There is always some level of risk because all soil contains some arsenic, and there is no such thing as good arsenic,” Mr. Broderick said. “In general, the opinion . . . is there is a low risk with low concentrations of arsenic in the soil. . . . It doesn’t appear, based on the samples we collected, that this is a chronic problem” at the Sag Harbor Learning Center.

The learning center is to be an early-childhood campus. The Sag Harbor School District had intended to house its prekindergarten classes there beginning in September, but construction delays forced school officials to postpone the plan. Once complete, the learning center will also likely host a private day care facility that will lease space and charge families for its services.

In assuaging the school board’s fears, Mr. Broderick drew two comparisons. In 2016, tests at the East End Community Organic Farm in East Hampton, which is right across the street from East Hampton High School, showed arsenic concentrations of 33.1 parts per million, which did not require remediation because it was within the parameters for farmland and because the soil was not going to be moved off-site. In 2012, in the upstate municipality of Middleport, soil tests showed nearly 600 parts per million of arsenic in school athletic fields. The schools there had been built on property once owned by a pesticide manufacturing company, and the company was eventually responsible for remediating the land.

Members of the Sag Harbor School Board previously said they learned of the removal of the soil in mid-January, about eight months after it had been carted away. It cost the district an additional $31,695.

Mr. Broderick provided an estimate for additional soil testing, but the school board has not approved it.

“This [school] would be for 4-year-old kids,” said Yorgos Tsibiridis, a school board member. “Could those levels be more threatening to them” if they happened to eat the soil, he wondered.

“Based upon the data I saw, it doesn’t look to be a concern until it is over 100 parts per million,” Mr. Broderick replied. “To see 17.5 is unremarkable. I would expect they would intentionally have to be eating it eight hours a day, and I’m pretty sure we’re not going to let that happen.”

Some school officials said afterward that they were glad to have more information.

“Any time there is an issue potentially affecting student health and safety, it is of course of the greatest sensitivity and concern,” Alex Kriegsman, the board’s vice president, said in an email this week. “But the consultant’s report was helpful in putting this information in the proper context and perspective.”

“I believe his presentation clarified the matter and helped ease any concerns,” Eleanor Tritt, the interim superintendent, said in an email. “We are continuing to move forward on the capital project.”