Ross cheerleading revived, and with it an all-American experience for boarders 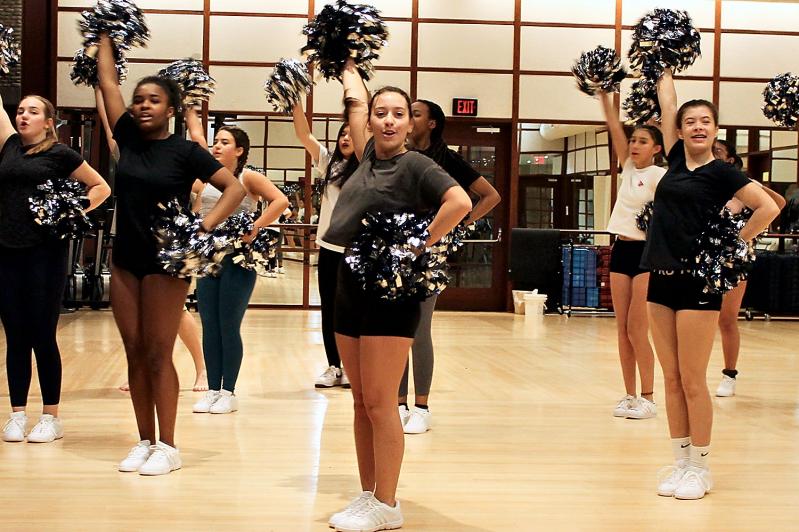 Raquel Babb has always loved movies. Some of her favorites depict life in high school in America, and almost always feature cheerleaders. The only problem was that the Ross School, where Raquel studies, hadn’t had a cheerleading team since 2012.

“I loved the idea of becoming one, just like the movies,” said Raquel, a junior boarding student from Mexico.

There are 12 girls and one boy on the team, which has been working hard since November. Almost every team member is new to cheerleading, so Andrea Chesley, the coach, has had to teach them everything about being a cheerleader.

The rules go like this: Promote school spirit. Stay in sync. Project your voice. And always, always smile.

“A lot of these students are new to cheer culture in general because it’s such an American thing,” Ms. Chesley said. “I think it will do a lot to improve the culture at Ross.”

Ms. Chesley, who has a buoyant, energetic personality, works in the admissions office at Ross. She was on a pom team in high school, is a trained dancer, and coached high school teams in the past, making her the perfect choice to coach the cheerleading team at Ross.

The team has learned multiple sideline cheers to get the basketball players and fans riled up and ready for action. The team has also learned a challenging halftime dance featuring popular music from different countries — a nod to the makeup of the team itself.

“We are very different people working hard to get everything on point and in sync,” Raquel said. “I think the hardest thing we have done are the jumps and learning to do them all at the same time. Also, the most fun we have had has been the halftime show! The halftime dance is turning out amazing. What I am most excited about is showing everyone what we have been working on because we are doing wonderful things in such a short amount of time.”

A few girls on the team have gymnastics experience, so expect some back flips and round-offs during the halftime show.

Most cheerleading teams hold tryouts in the summertime, but because it is considered a winter sport at Ross, tryouts there were in November.

The cheerleading team was featured prominently in a video on the school’s official Instagram a few weeks ago. They were pictured shaking their pompoms in the shape of the letters “R-O-S-S.”

Among the rules of cheerleading, Ms. Chesley said, is that practice is mandatory. “They’re learning how important it is,” she said. “If someone’s missing, you don’t have an ‘R’ anymore.”

Raquel said the group has “an amazing vibe” and is so much fun she wants to be around her teammates all the time. She counts them as friends — friends she might not otherwise have made during the course of a typical school day.

“Everyone on the team is very talented and I learn a lot every day with them,” she said. “I was also proud of myself because it gave me an opportunity to test my leadership skills. My goals are simple: I want the Ross students to see how fun and important this team is. We also want to grow as a team. We want each year to be more people and have more experience.”

“It’s been really impressive to see how they’re taking to it,” she said. “They say, ‘It looks hard. Let’s try this.’ ”