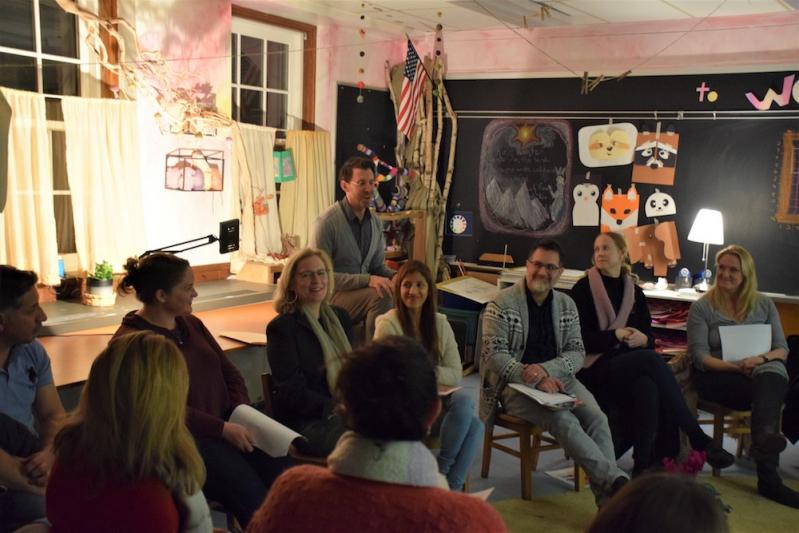 Alicia Tsibiridis remembers a time when having a telephone line in your bedroom was cool. Not the cellular kind of phone — just a regular old landline.

“The big thing now is fifth-grade graduation. Everyone gets an iPhone,” Ms. Tsibiridis, a mother of two and the president of the Sag Harbor Elementary School PTA, said at the first meeting of a new group for parents last Thursday night.

The discussion centered around the national Wait Until 8th campaign, in which parents pledge to wait until their children are in at least eighth grade before giving them smartphones.

Led by Traci Robinson, along with Gary Osborne, an art teacher at the school, parents came together to air concerns about smartphone use by children. The goal of the campaign, Ms. Robinson said, is to “preserve our children’s childhood” for as long as possible before giving them access to technology that is very much a gateway into the grown-up world.

Ms. Robinson and Mr. Osborne had hoped that three or four parents would answer their invitation to meet, but to their surprise 20 showed up. “It feels good that there are other parents who feel this way,” Ms. Robinson said.

NPR reported in October that 53 percent of children in this country own a smartphone by the age of 11. There are multiple schools of thought on this, according to NPR — including the camp that says parents should model healthy and appropriate smartphone uses for their children and let the kids participate, and the other side, which asserts that young children aren’t ready to do so.

According to the Wait Until 8th campaign, smartphones “are quickly changing childhood for children. Playing outdoors, spending time with friends, reading books, and hanging out with family is happening a lot less to make room for hours of Snapchatting, Instagramming, and catching up on YouTube.”

Mr. Osborne said social media use, which is often an extension of having a smartphone, may cause children to “lose sight of themselves” among people’s unrealistic portrayals of social lives. But he acknowledged that smartphones can have benefits, such as enabling children to use apps that can help with schoolwork.

“We can’t look at it as black and white,” he said. “There are so many grays. Each family is going to sculpt this differently.”

The Wait Until 8th effort is banking on parents signing on and spreading the word. “By banding together, this will decrease the pressure felt by kids and parents alike over the kids having a smartphone,” it says. Some parents said last Thursday that their children already feel excluded for not having one.

Sarah Cohen took the pledge two years ago. She told the group that her older daughter has never asked for a smartphone. “But she’s asking for a way to communicate with her friends,” Ms. Cohen said.

Tanya Rulon-Miller, who works with the organization Safe in Sag Harbor, compared the addictiveness of smartphones to cigarettes. “We needed that message early on,” she said. “The earlier the better that we all become educated.”

Twice during the meeting a cellphone rang out. Those moments prompted some laughs, but also illustrated the point Ms. Robinson was trying to make about attachment. She said she even had to teach her son to say to her, “Can you put the phone down, Mommy?”

Matt Malone, the elementary school’s principal, popped into the meeting midway through.

“Smartphones and cellphones offer many conveniences, but we must stay aware of the challenges that these devices pose when presented to our children too early,” he said on Monday. “Having a forum where parents, members of the school, and caregivers can come together to discuss and share ideas on this topic is beneficial to all.”

The conversation last Thursday ultimately turned to solutions and ideas. It was decided that the group would meet once a month, and that children would be invited to come and do art projects with Mr. Osborne while their moms and dads worked on the issues. There will be guest speakers. A private Facebook group was formed for those Sag Harbor parents who took the Wait Until 8th pledge, and they agreed to spread the word among other families.

Juli Everett suggested turning again to the landlines that Ms. Tsibiridis mentioned earlier. “We can even get them cool phones from Etsy,” Ms. Everett said.