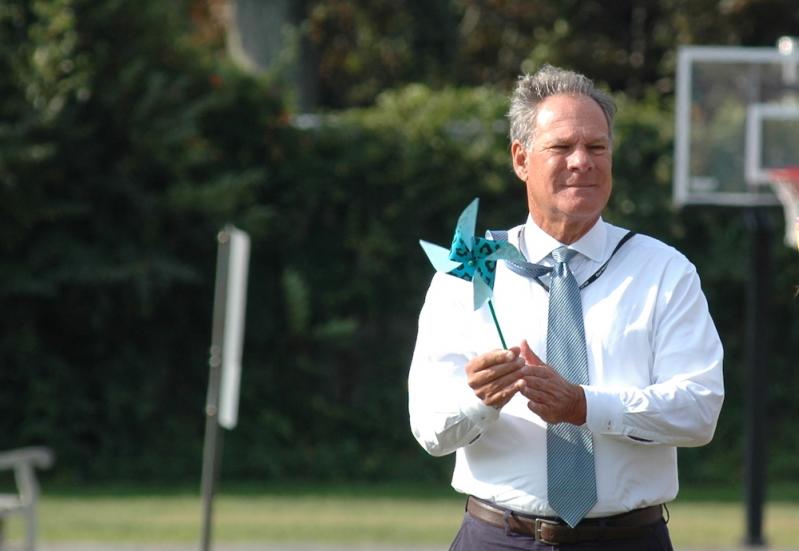 Richard Burns at a 2014 Pinwheels for Peace event at the John M. Marshall Elementary School
Carissa Katz
By Christine Sampson

"From day one, Rich hit it out of the park," said Jackie Lowey, a school board member who was on the hiring committee that chose Mr. Burns as superintendent in 2012. "He was so clearly the right person for the job. It has been such a pleasure. You have really led this district masterfully."

Mr. Burns relocated his family from New York City to come to East Hampton as a special education teacher in 1990. He rose to the position of director of pupil personnel services, overseeing the special education department, before taking an interim superintendent post in 2011. He was formally appointed East Hampton's superintendent in April of 2012, succeeding Raymond Gualtieri.

He will be succeeded by Adam Fine, currently the district's assistant superintendent. During Tuesday's meeting, Mr. Burns said he gave his notice now so that the transition team could begin planning. After Mr. Fine takes over as superintendent, there will be another empty administrative seat to fill.

He recalled being nervous about leaving a tenured teaching position in New York City schools to come to East Hampton, but said it was ultimately the right choice.

"Thank you, East Hampton, so much for the opportunity they gave not only to me but to my family," said Mr. Burns, who lives in Springs, and whose five children attended public schools here. "This was truly a wonderful place to work and will always hold such a dear part in my heart."

"He sure as hell has made this place better," Mr. Ryan said.