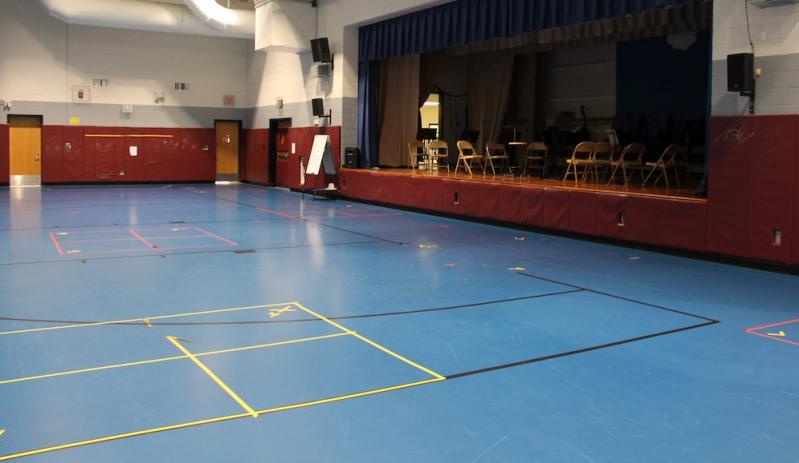 The all-purpose room at John M. Marshall Elementary School does not have mercury in the rubber-like floor, according to the company that installed it.
Christine Sampson
By Christine Sampson

South Fork schools have followed up on a 2019 New York State Education Department mandate requiring schools to test for the presence of mercury vapors in certain types of flooring materials, and documentation provided by the Sag Harbor and East Hampton School Districts this week showed none of the rubberlike floors in their buildings were emitting those harmful vapors. Other districts reported not having any of the potentially hazardous flooring materials in the first place.

Last spring, Newsday reported school officials in Amityville, Merrick, and Miller Place had discovered the presence of mercury vapors in some facilities, prompting three schools to close for testing and remediation. Earlier this month, three classrooms in Northport Middle School were taken off-line when mercury vapors were found to be coming from a source near the rooms outside the school building.

In the summer of 2019, State Senator Todd Kaminsky, whose 9th Senate District includes the western end of Nassau County's south shore, introduced legislation to establish limits on exposure to mercury, a neurotoxin that can harm the respiratory system and cause memory loss and tremors. Gov. Andrew M. Cuomo recently put his signature on the bill, which also prohibits the installation of new mercury-containing flooring in schools and stops schools from simply installing new floors on top of older ones that emit mercury vapors.

At Sag Harbor Elementary School, where the gymnasium has a synthetic, rubberlike floor, the environmental engineering company J.C. Broderick performed tests and gave the school a clean diagnosis. Senator Kaminsky's legislation established an exposure level no greater than .75 micrograms per cubic meter, and J.C. Broderick found less than .05 micrograms per cubic meter at Sag Harbor Elementary, meaning it was virtually undetectable.

"Clearly, safety of the children is our primary goal and responsibility," Eleanor Tritt, Sag Harbor's interim superintendent, said this week. "There were no detectable vapors. Obviously, we're pleased that that is the case, and is the best situation. For the safety of the staff and the students, that is what you would hope would be the case."

East Hampton's John M. Marshall Elementary School has a rubberlike floor in its all-purpose room, and East Hampton High School has a similar one in the fitness room. The district provided documentation from the installer of the floors, Milburn Flooring of Copiague, certifying that the Dutch-manufactured materials do not contain any heavy metals such as mercury, lead, and cadmium.

"Whenever there's a danger to students, we try to do testing if needed, but the fact that there's no mercury in the flooring is positive for the children and the staff," Richard Burns, East Hampton's superintendent, said this week. "We're pleased. You see what's going on in the other districts."

He could not recall specifically when the two floors were installed in East Hampton, but "there are so many different products now," Mr. Burns said. "At the time, I guess we made the right choice. I don't think it was a conscious effort, but we got a quality product at the time that luckily adheres to the standards that are necessary now."

According to the State Education Department announcement that mandated the testing last June, the floors most likely to contain mercury were installed between 1960 and the late 1990s.

"We have learned that rubberlike polyurethane floors using phenyl mercuric acetate (P.M.A.) catalyst were installed in school multipurpose rooms, gyms, cafeterias, auditoriums, stages, and indoor tracks. . . . P.M.A. can break down and release odorless, colorless mercury vapors at room temperatures," said then-Commissioner MaryEllen Elia. "The floors and items that have been in contact with them emit mercury vapor indefinitely. . . . Exposure to mercury vapor may be worse if floors are damaged or deteriorated or are located in hot rooms with poor ventilation or a lack of air conditioning."

School officials from the Bridgehampton, Montauk, Springs, Amagansett, Sagaponack, and Wainscott districts all told The Star their schools do not have any of the rubberlike floor materials in question. School officials at the Ross School and the Hayground School also said their facilities do not have those flooring types.