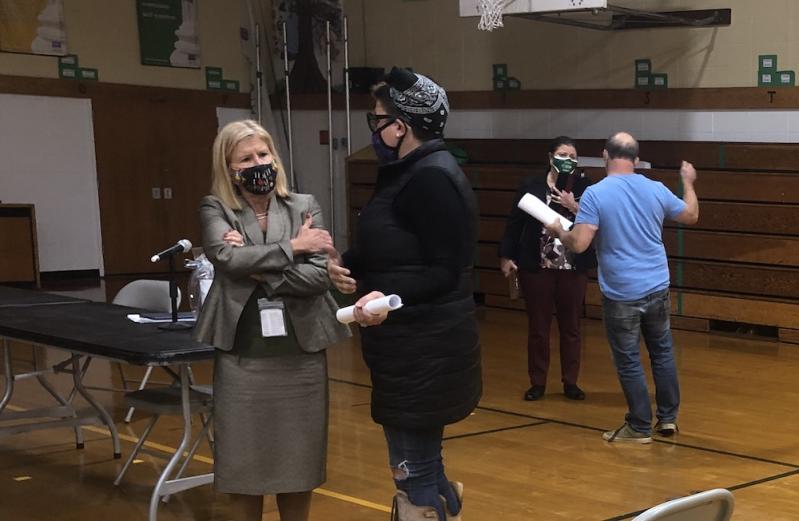 Springs School administrators, who said late in the summer that they would revisit the district's hybrid learning plans by the 10th week of school, are nearing their self-imposed deadline to do so. At a school board meeting Monday night, parents demanding more instruction from teachers on remote days clashed with educators, who said they are simply doing the best they can.

At Springs, students are in-person two days a week, either Monday and Thursday or Tuesday and Friday. On Wednesdays, all students are learning virtually. Over the summer, the school district released an academic reopening plan that pledged "substantive interaction between teachers and students, whether instruction is delivered in person, remotely, or through a hybrid model."

Jessica Fingleton, who has a child in middle school at Springs, said her child is "literally done" with her schoolwork by 10 a.m. on her remote days.

"I'm sorry, but she needs more interaction than being done at 10," Ms. Fingleton told the school board. "She does check into a class at 2, but that's a big gap. It's more than a lunch hour. I feel like she's not getting what she's supposed to be getting."

Tatiana Tucci, a parent of four, also said her youngest child isn't getting enough substantive interaction. She said her child mostly gets work packets and that she herself has had to fill in the gaps with extra activities and assignments.

"We are working and we cannot spend hours and hours trying to fulfill the teacher's duty," Ms. Tucci said. "I understand it is a very difficult situation and my heart goes out to everybody. We know the virus is not going anywhere. . . . The children are not getting what they need."

"They really do need someone to instruct them," Chris Tucci, Ms. Tucci's husband, added. The couple said they are in favor of live-streaming classroom instruction, which is a model employed in the East Hampton School District for remote learning.

Monique Sullivan, a Springs School second-grade teacher whose children attend the school, said there is no "one-size-fits-all" solution, and that live-streaming wouldn't work for her own children.

"If you're asking for something totally different, there's got to be something else you're taking away," she said. "What are we compromising? Are we compromising the health of our children? We are doing our best. It's hard for me to sit there and hear you saying that we're not doing our responsibility. I can tell you I am going to bed sometimes at 1 a.m. or 2 a.m. We're giving our all and we're giving all we can."

Christine Cleary, the acting school principal, said that when the district surveyed its more than 600 families over the summer, it received approximately 130 survey responses back. A new survey has already been sent out ahead of the 10-week mark.

"The more data we have, the better-informed decisions we can make," Ms. Cleary said. "I think we all agree with you that we are not where we want to be. This is a process."

"Somehow, we're going to have to figure this all out together," she said. "We definitely take it very seriously."

Asked whether alternating attendance on Wednesdays could be introduced, Debra Winter, the superintendent, said the Department of Health "would not recommend increasing density."

Mr. Tucci suggested the district offer a fully-remote learning option by dedicating a teacher at every grade level, or one teacher per two grade levels, as schools like Wainscott and Sagaponack do, to lead those virtual lessons. That way, Mr. Tucci said, more children could be accommodated five days per week in the in-person setting.

"You're talking about an increase in full-time equivalent staffing that this budget could not handle," replied Tim Frazier, a school board member whose wife is a teacher at Springs.

Ms. Sullivan said she wants nothing more "than to have the kids in five days a week . . . but that's not the reality now."

There were six community members present at the meeting Monday, which was also live-streamed on YouTube. Technical issues provided a backdrop of frustration for more than 80 people who were trying to watch the meeting online, but who could not hear much of the conversation. As a result, the school board pledged to have a special meeting next week in a more inclusive format to hear more input.

Trees, Wreaths for Sale in Amagansett
Holiday Cheer Is Coming to Sag Harbor
Even More Thanksgiving Options From the Pike and Old Stove
END_OF_DOCUMENT_TOKEN_TO_BE_REPLACED