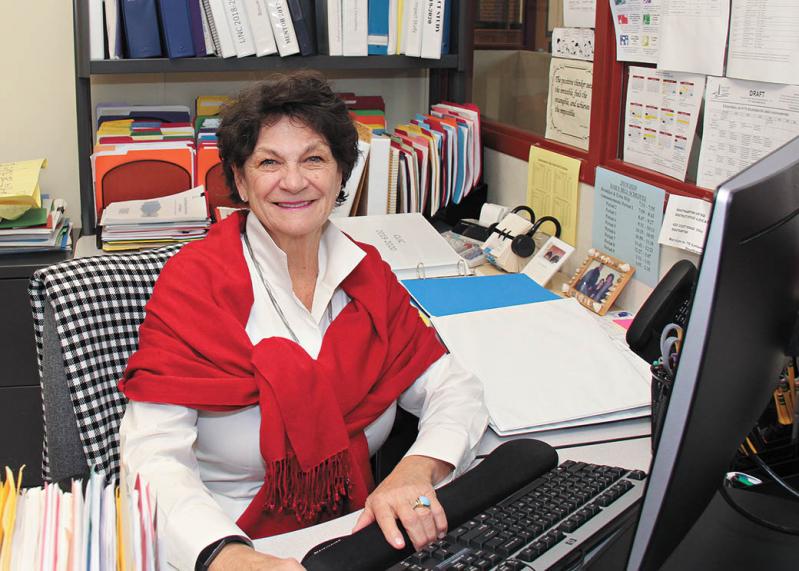 Larrilee Jemiola is the director of the Peconic Teacher Center, which is a training hub for local teachers interested in honing their skills.
Durell Godfrey
By Christine Sampson

Larrilee Jemiola’s teaching career has spanned about five decades. The veteran East Hampton educator has seen it all — from major shifts in state education policy to movements in social-emotional learning, special needs programs, and support for children who are not native English speakers.

But these days, Ms. Jemiola’s students are not the youth of the East End. Rather, they are other teachers, from Hampton Bays to Montauk and from some local private schools as well. She is the director of the Peconic Teacher Center, a program that supports educators who are continually honing their craft, so they can be highly effective in the classroom.

“I’m a resource for districts,” Ms. Jemiola said over hot chocolate on a recent snowy afternoon. “I have a great network of teacher resources — professional developers — and we send them out to the schools. We do a lot and invite all the districts to come.”

Ms. Jemiola frequently gets requests from administrators who want specific types of training sessions for teachers. In the past there have been workshops on how to meet the needs of students with, for example, dyslexia or autism. A few years ago, when teachers here increasingly began welcoming diverse “English language learners” into their classrooms, Ms. Jemiola was at the forefront of helping those teachers get certified with new state credentials.

She has established partnerships with colleges to offer graduate-level courses. There are classroom management programs for first-year teachers; Dignity for All Students seminars to prevent bullying and bias in schools, and, right now, there’s a lot of curriculum writing for the Next Generation learning standards that have been adopted in New York State. Ms. Jemiola also travels to Albany to learn about education law changes firsthand from state education policymakers.

Founded in 1984 in the Southampton School District, with a grant from New York State, the organization originally served just that one district. In 1986 it also began serving the Hampton Bays School District, and in 1992 it incorporated several other districts to become the Peconic Teacher Center. Each member district or private school makes a financial contribution to keep the program running. The physical facility is in Southampton, but many of its offerings are online now. Information can be found at peconicteachercenter.org.

Ms. Jemiola, who started her career on the South Fork in 1970 as a second-grade teacher with a special focus on literacy, has been at the helm of the center for about 35 years; she retired in 2006 but soon returned.

“I have been honored to work with teachers from Hampton Bays to Montauk,” she said. “All you have to do is pick up the phone and call.”

Jennifer Vinski, a Bridgehampton School Board member who is a teacher in the Southampton School District, sang the praises of the center during a recent school board meeting. She herself uses the facility at least once a month to
to design new lesson units that are in line with the Next Generation standards.

“It’s been a very valuable resource,” Ms. Vinski said. Ms. Jemiola “has been willing to jump in and help wherever there’s a need. She has been a very strong advocate of teachers. She’s someone who tries to be ahead of the curve in making sure that everyone is well prepared, whether it’s training for new programs or changes that are happening.”

Ms. Jemiola is also on the boards of the Greater East Hampton Education Foundation and the Y.M.C.A. East Hampton RECenter, and is active with the East Hampton Ladies Village Improvement Society.  She calls her contributions to those groups “joyful work.”

“I do believe in teacher leadership,” Ms. Jemiola said. “What my program is designed to do is give teachers tools in their toolbox to make good decisions in the classrooms because they’re so fluid. You really have to have your toolbox constantly refreshed, sharpened, to bring the best thinking in education research and instructional practice. It’s about craft. How do you teach so that every child has the opportunity to learn? It’s about equity.”