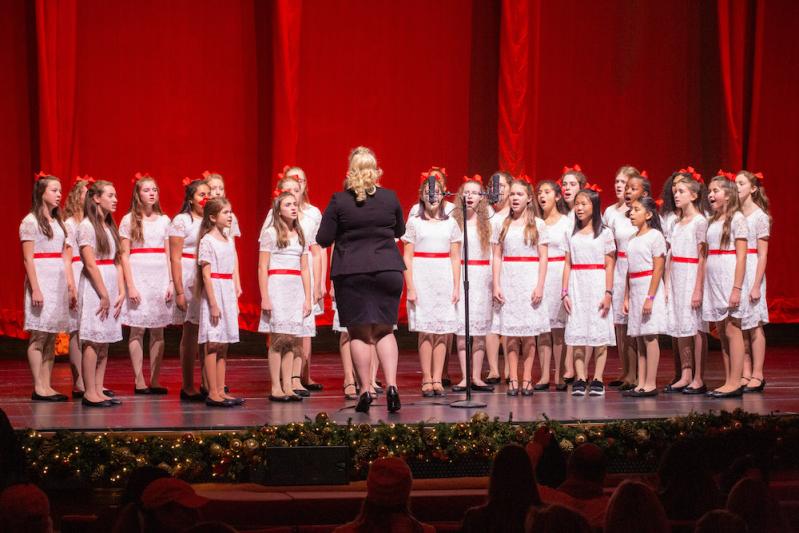 Melanie Freyre was bursting at the seams with news she couldn’t share for months: The Bonnettes, a group of East Hampton Middle School singers under her direction, had been chosen to sing in the “Sounds of Christmas” performance series at Radio City Music Hall. They’d be an opening act for the Radio City Christmas Spectacular, which features, of course, the iconic Rockettes.

The all-girl group’s much-anticipated performance on that storied stage was Friday afternoon in front of about 6,000 people. They had brand-new outfits for the occasion — white lace dresses with red sashes and red hair bows. They sang two songs a cappella. And they were wonderful, Ms. Freyre said this week.

“Our little school being introduced at Radio City — one of the most famous stages in the world — was quite special,” she said. “They were just so impressive. They were focused.”

Two of her students, Dakota Quackenbush and Hadley Hren, both eighth graders who are in their third year as Bonnettes, called it a “crazy” experience, in a good way.

“It was a dream come true, honestly,” said Dakota, who has performed locally at places like Bay Street Theater and once landed a role in a national tour of “The Sound of Music.”

“It was a lot to take in,” she said. “We learned a lot about what goes on backstage and how the stage was built. We learned that we definitely have to ‘sing out,’ and that no matter what we do, someone is always watching us.”

Hadley, a huge Taylor Swift fan, was excited about performing on the same stage where her idol has sung. “We usually only have about 600 people at our concerts, but multiply that by 10. It was really cool,” she said. “I wasn’t that nervous until we actually got on stage and saw all the people. Then I got a little nervous. We did fine, I think. I hope.”

The 28 members of the Bonnettes had to audition to be in the group in September. They practice once a week after school and sometimes during the day. Ms. Freyre, the middle school choir teacher, started the group 13 years ago to give interested singers the opportunity to take on more challenging songs. She named them the Bonnettes, a Bonacker-style take on the Ronettes, the popular 1960s group.

On Friday, the Bonnettes performed a “Silent Night” arrangement and another that melded 26 upbeat Christmas carols into a single, seamless song. The girls also got a tour of the entire Radio City concert hall and met a Rockette before the show.

Of the 6,000 people in the audience, 135 were family members and friends. Ms. Freyre said she and students appreciated the support, particularly since Radio City is so far away.

“It went by quickly but at the same time in slow motion,” she said. “I was standing up there conducting them and thinking, ‘This is just unforgettable.’ ”