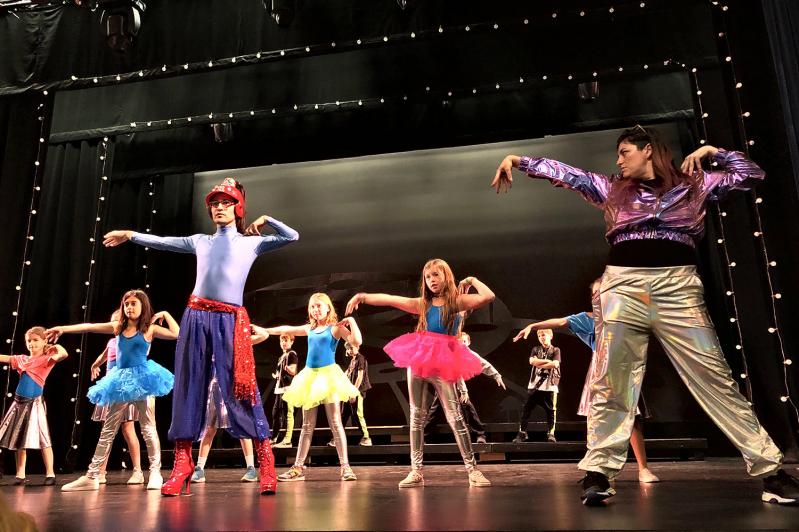 Our Fabulous Variety Show’s fall production, “1,001 Galactic Nights,” is influenced by “Star Wars,” “Aladdin,” and “America’s Got Talent.” Above, the cast rehearsed on Sunday.
Carissa Katz
By Christine Sampson

In conversation together, Anita Boyer and Kasia Klimiuk have the sort of energy that sparks back-and-forth like a pinball machine fueled by lightning.

Their nonprofit community theater company, Our Fabulous Variety Show, benefits from that energy in the form of original stories, dynamic dance numbers, and an all-around good time for everyone — cast, crew, and audiences alike.

Our Fabulous Variety Show will raise the curtain on its latest production, “1,001 Galactic Nights,” tomorrow at Guild Hall. Shows are at 7:30 tomorrow and Saturday and at 2 p.m. on Sunday.

“We created the show with the cast,” Ms. Klimiuk added. “It’s completely original, new, fresh, and brought to you by our cast of over 50 people.”

The show starts with the idea of “genie culture,” which represents “today’s obsession with instant gratification culture,” Ms. Boyer said. “In current times, things started going south when genies became real and everyone had unlimited wishes. There was a cost, and that is that the environment and the Earth became uninhabitable, so we had to migrate to another planet, Uutab. On planet Uutab, there is one last wish that remains in the entire galaxy. The only way to win the last wish is to win the  show ‘Galactic Nights.’ ”

It was Ms. Klimiuk’s idea to name the planet “Uutab.” It’s a nod to the Star Wars planet Batuu.

She brings to Our Fabulous Variety Show her background in applied theater, which she describes as "an umbrella term for various theatrical conventions that use theater as a tool for education, development, social justice, and activism."

“We’re probably one of the only East End theater companies creating shows like this that are rooted in new ideas rather than using a pre-existing script,” she said.

To write the story, Ms. Boyer and Ms. Klimiuk guided the cast first through improvisation, in which they experimented with different ideas and vignettes. They recorded all of them, then began sorting and organizing them into a cohesive story.

“The whole process is all-inclusive. Everyone has input into the dances and the songs we use,” Ms. Boyer said. “It’s really fun, especially for the younger part [of the cast], to be in a situation where they’re hearing, ‘Yes. Yes, your idea is good, and we’re going to put in onstage at Guild Hall.’ They are really creative and brilliant.”

The troupe includes performers from ages 6 to 83. The “1,001 Galactic Nights” show will be the group’s 25th full-scale production. And Ms. Boyer and Ms. Klimiuk are hoping to raise the bar even more with their own dedicated studio space in the near future (they rent space now from Dancehampton, where they both teach classes, and AKT Studio, both in East Hampton). To that end, the two directors have launched a fund-raiser with the goal of collecting $25,000 by Leap Day in 2020.

“We’re thankful for those relationships” with DanceHampton and AKT, Ms. Boyer said. “It’s always been very synergistic, but right now we’re kind of surrounded by exercise balls and ballet barres.”

“It’s a creative process and we want our cast to be surrounded by tools and posters and imagery and costumes and props and everything we need to spark that creativity,” she said.

They are hoping for donations even as small as $5.

“It would make everything more sustainable for us,” Ms. Klimiuk said. “We need a home. We’ve done a lot in the last nine years, but it would be great to grow.”

“This fund-raiser is a way to gauge the community,” Ms. Boyer added, “to say, ‘This is what we’ve been doing, is this something you want us to keep doing? And if it is, would you be willing to put some money behind us?’ ”

“It’s not just about putting on a show,” Ms. Klimiuk said. “Our kids are amazing role models in their communities, and the things they are learning onstage, about being in an ensemble and teamwork, it translates to their lives. It’s not just about being an actor. It’s more than that. [Donors] are supporting development and the things that kids are learning in the workshops that are going to stay with them for their entire lives.”

Tickets to a show, which start at $20, as well as a link to make a donation, are on the group’s website at ourfabulousvarietyshow.org.