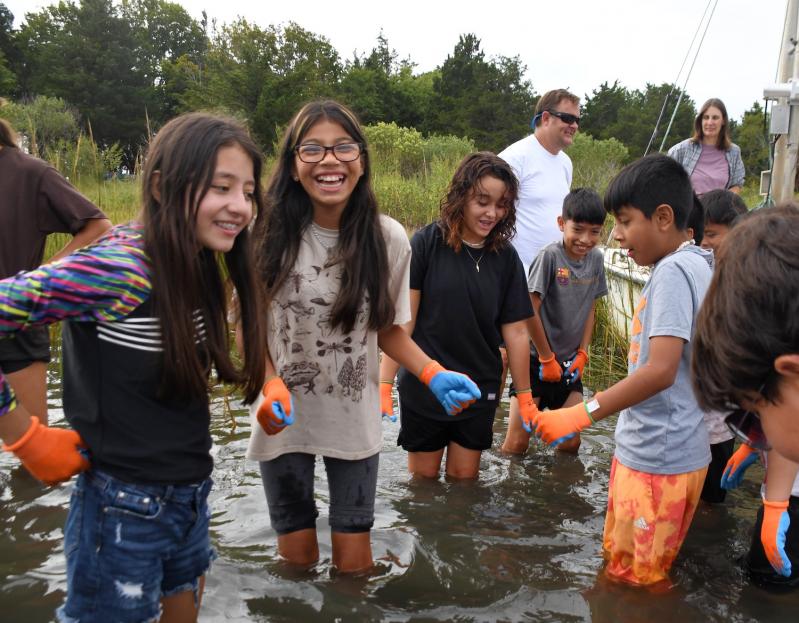 Monday’s field trip into the waters of Accabonac Harbor took Bob Tymann, the education committee director for the South Fork Sea Farmers, back to his days teaching biology and social studies in public schools.

Working with Barley Dunne, the director of East Hampton Town’s shellfish hatchery, Dr. Tymann and 58 sixth-grade students from the Springs School, their science teacher, plus eight students and two interns from East Hampton High School, installed a new oyster reef in Accabonac Harbor — paving the way for cleaner waters, a healthier ecosystem, and an interest in stewardship among the children.

“One of the things we often discuss at the South Fork Sea Farmers is making sure that we’re educating the public by constructive action,” said Dr. Tymann, who retired in 2020 as assistant superintendent of the East Hampton School District. “We want the public involved in environmental projects. . . . To let the next generation get hands-on experience in molding their own environment is very rewarding for them, and rewarding for the environment.”

The installation of the reef began on Friday. “Barley and I went out and put the base of the reef down, which was about 180 bags of surf-clam shells that are in mesh bags that are biodegradable. They’ll hold together for about two years until they start to form a natural reef,” Dr. Tymann explained.

Enter the Springs students. With gloved hands, the students passed 120 bags of spat-on-shell bucket-brigade-style out to the new reef as its top layer. The hope is that enough of those baby oysters will survive to maturity, at which point they will be expected to filter 50 gallons each of water a day.

The late-summer weather couldn’t have been more perfect, with calm waters and sunshine. “The one hiccup was low tide wasn’t as low as we thought, so it was difficult to see the reef as we were putting it together,” Dr. Tymann said.

Skye Tanzmann, an East Hampton High School senior, and Nick Cooper, an East Hampton junior, have been working with the South Fork Sea Farmers as interns. They also take part in the school’s science research program.

“We’ve been shoveling shells for a long time to get ready for this,” Dr. Tymann said. “We started growing the spat-on-shell over the summer. Barley created it over the winter at the hatchery out in Montauk, and we moved them in the spring to the waters off of Gann Road. That’s when Nick and Skye took over maintaining those — until today. They were really important. They made it possible.”

Skye, who is the president of the high school’s environmental awareness committee, said that the internship has “far exceeded” her expectations. “Of course I learned about the scientific and technical side of the hatchery, but I was surprised by the supportive community of like-minded individuals that it consists of,” she said. “I’ve gained a plethora of interpersonal skills and motivation towards helping inspire future environmentalists. . . . This hands-on learning experience has intrigued me into the natural intricacies of our world more than ever before. I hope to continue studying the environment and biology in college and beyond.”

Next up for Skye and Nick is a presentation to the East Hampton Town Trustees to pitch two more artificial reefs in the harbor — which will have an added benefit of preventing erosion. “The next two reefs will be in front of houses on the bay,” Dr. Tymann said. “We’re hoping to actually help mitigate the erosion problem that’s happening in front of both of those houses by utilizing the reefs to attempt to stabilize the shoreline.”

Skye said searching for a hard-bottom underwater surface for the next two reefs is key; she and Nick have been doing this on kayaks. “A soft bottom would result in the reef sinking into the ground, suffocating the oysters,” she said.

For the Springs kids, the trip on Monday was a candidate for the title of “best field trip ever.” The reviews were glowing, said their teacher, Erik Schwab.

“It feels amazing to know that all of us have done a good deed for the community and making a better future for more sea life,” one student told him. Another said, “I enjoyed this cool field trip a lot, but the thing I feel was the most fun was passing the bags of shells in a line. It felt like we were the dwarves in ‘Snow White’!”

“We did lessons leading up to it,” Mr. Schwab explained. “Last week we talked about the life cycle of oysters and their importance, and why we’re even doing this. They have a pretty good understanding as to why they did it. . . . It was cool to see them making those connections in the field.”