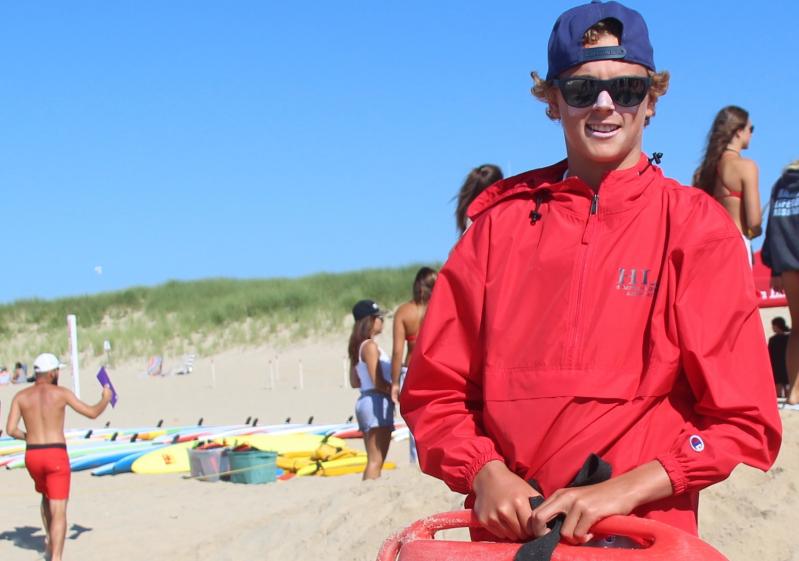 Miles Menu of Springs, a junior lifeguard, made his first ocean save.
Durell Godfrey
By Jack Graves

Miles Menu, a 13-year-old who will start eighth grade at Springs School in the fall, and who is a participant in the Hampton Lifeguard Association's Junior Lifeguarding program, made his first save at Amagansett's Atlantic Avenue Beach on July 3, a feat that was recognized at Sunday's training session there.

In a telephone conversation Monday, Miles, who is one of the Y.M.C.A. East Hampton RECenter Hurricane swim team's top competitors, said he and a couple of friends were body surfing about a quarter-mile to the west of the nearest Atlantic lifeguard stand at about 2 or 3 p.m. when they saw a man "caught in a rip."

"Me and my friend, Dylan Knapik, were standing in the water just beyond the break -- it was shallow, the water wasn't really rough, but it was a yellow flag day. . . ."

Asked if the man was holding up his hand to signal that he needed helm, Miles said, "No, I was holding up mine and asking him if he needed help. He said 'no.' He was about 20 yards away from us and we could see he was going out, steadily. We swam out to him anyway -- it looked like he was in trouble. He was glad when we got there that we did."

With Miles pulling him by the arms and with Dylan pushing, they moved him to the side, out of the rip.

"It took maybe about a minute," said Miles. "He was a big guy. We were about 20 yards off the beach by then, and we brought him in."

There was no need for artificial respiration, which the H.L.A. junior guards, aside from being schooled in the dangerous nature of rip currents, and in rescues, are taught.

It had been "an interesting experience," said the lifeguard-to-be.

Mashashimuet Park's History and Future
A Conference for Young People to Create Solutions
Get Outside, Get Moving
END_OF_DOCUMENT_TOKEN_TO_BE_REPLACED