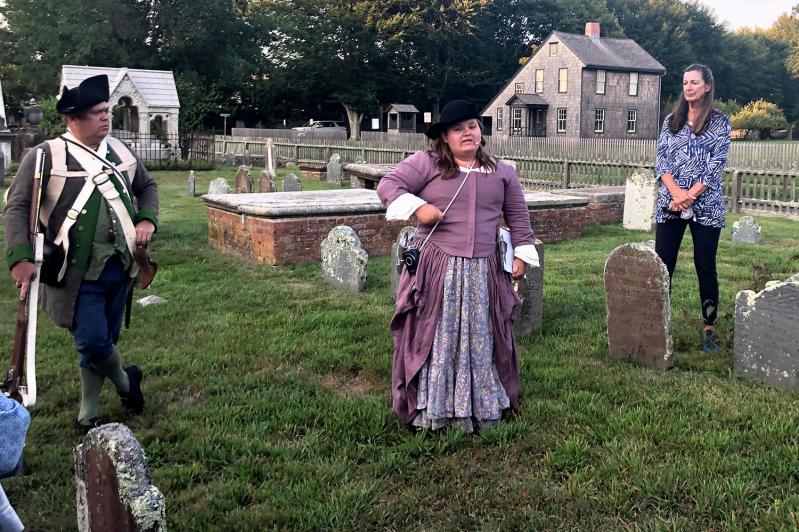 When Juliana Lester, a rising East Hampton High School senior, noticed that "a lot of the locals have been moving away and . . . our story is kind of slipping through our fingers," the 16-year-old decided to do her part to teach people about the village's history.

In March, she began writing a script for a potential walking tour of the village focusing on the 17th century and buildings relevant to the village's 1648 founding. It is familiar territory for her. Both she and her father, Brian Lester, are members of the 3rd New York Regiment, which does Revolutionary War-era re-enactments. With his support, she then pitched her tour idea to the mayor and secured the necessary permits to turn the script into action, finalizing it with help from the town historian, Hugh King, with whom she had worked at the Hook Mill in East Hampton. They designed two tours: Those in July covered the south end of the village, addressing its original creation, and those starting on Saturday will educate participants on the history of the north end, where the village expanded to.

"I don't want to continue to lose important pieces of our history," she said on Saturday. "Hopefully someone will listen to them and hold on to them."

Mr. King has been on every tour so far. "I don't have to, but I do," he said Saturday as Juliana, dressed in Revolutionary War-era garb, aptly led a group of about 30 to a dozen stops along James Lane. Her father, in similar period dress, walked beside with a musket — one of the stops included a demonstration of firearm procedure (though the musket was not loaded).

The tour stopped at St. Luke's Episcopal Church, the Gardiner Mill, the Gardiner Mill Cottage Gallery, the site of the first Presbyterian Church, Guild Hall, and several grave sites in the South End Burying Ground as well as other locations, finishing at the site of the second Presbyterian Church. Juliana took questions from the audience at each stop.

The large crowd last Saturday was a far cry from that of the first tour, which had only "four complete strangers," and her family members, Juliana said, adding that the tours received a "really positive response."

Despite her interest in history, Juliana does not plan to study it, and instead plans to study medicine. After her studies, however, returning to her hometown is a given. "I want to come back to East Hampton and live here for the history and continue to tell the story, so the culture doesn't die out," she said. "So that the next generation of Bonackers still has roots here."

Tours happen each Saturday at 7 p.m., meeting outside of the Home, Sweet Home Museum on James Lane. They are free, and no registration is required.