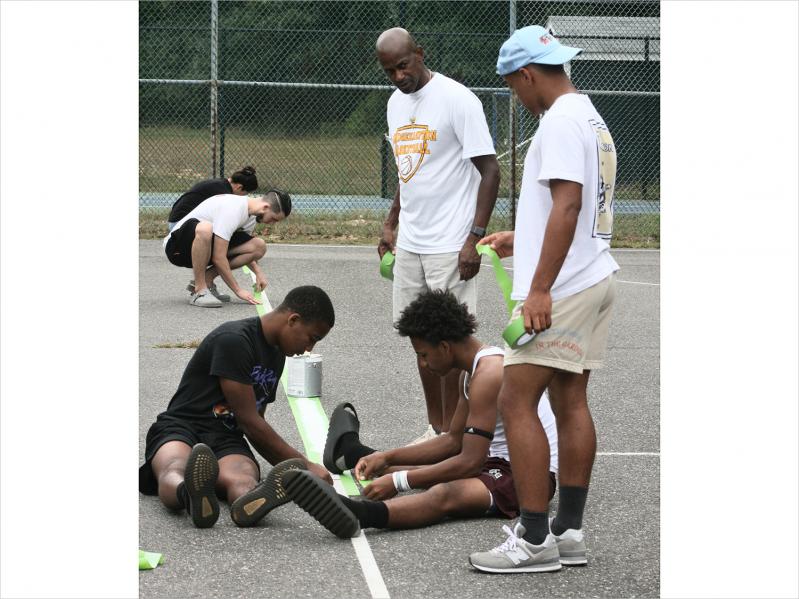 Carl Johnson and three Killer Bees, Mikhail Feaster, left, Jai Feaster, and Alex Davis, standing, were among those who repainted the lines and painted the foul lanes and areas within the 3-point arcs at the Bridgehampton Child Care and Recreational Center’s basketball court Sunday.
Jack Graves
By Jack Graves

The basketball court at the Bridgehampton Child Care and Recreational Center was redone Sunday, its cracks sealed with cement filler, and its lines and the areas near the baskets painted. It’s a project that Carl Johnson, who won three state basketball championships as a player and four as a coach of Bridgehampton High School’s Killer Bees and is on track to become the center’s athletic director, says will be the first step in a much larger plan that’s to include a new gymnasium, an indoor swimming pool, a regulation-size tennis court, and soccer, baseball, and kickball fields on the five-acre Sag Harbor Turnpike property.

Mike Evans and his wife, Alexandra, Connecticut residents who have been building and rebuilding basketball courts in Wyoming, the Dominican Republic, Cuba, and Panama, among other places under the aegis of the Full Court Peace charitable organization, oversaw the resurfacing work. The crew included four present-day Killer Bees, Mikhail and Jai Feaster, Alex Davis, and Marques Thomas.

After reading of the Evanses’ work online, Robert Durkin, the former owner of Karen Lee’s restaurant in Bridgehampton and a longtime friend of Johnson’s who is helping with fund-raising, got the Norwalk couple to come out. The foul lanes were painted gray, the adjacent areas within the 3-point line were painted green at one end and red at the other, and the lines taped before being repainted white.

“The cracks aren’t so bad,” Mike Evans said before the work began. “Your toe can’t fit in them.”

Construction on the center’s new 7,000-square-foot facility is almost done and last summer its executive director, Bonnie Michelle Cannon, announced that an anonymous donor had pledged to fund an indoor pool.

“It’s so important that kids out here learn to swim,” said Johnson, who as a child learned “the old way,” on North Carolina’s Outer Banks, with his uncles, who he was assured weren’t about to let him drown, looking on. There were indoor pools in Riverhead and in East Hampton, at the Y.M.C.A. East Hampton RECenter, “but Riverhead’s too far, and the Y’s always full. We’ll give lessons to the kids here and let adults use the pool before school gets out. It will be bigger than the Y’s pool, but smaller than an Olympic one.”

Looking around him, Johnson, who is reasonably sure that funds to underwrite the ambitious project can be raised, said, “I want to get this place back into shape.”