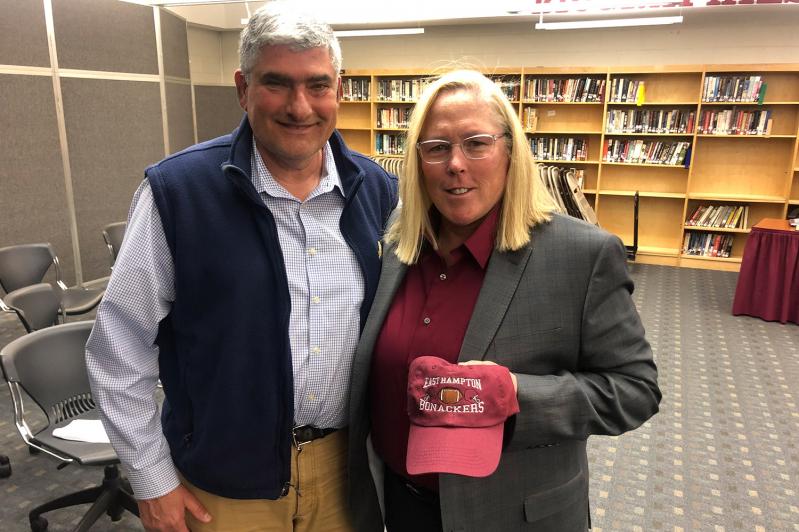 In an interview before the meeting, Mr. Vas said Ms. Masterson’s hiring is “good news for the district.” It was, he told her, “a great place to work.” They have been colleagues for 17 years on various committees for Section XI, the organization that oversees sports in Suffolk County.

Most recently, Ms. Masterson was the chair of the geography committee that considered a proposal that some East Hampton High teams play opponents closer to home, a proposal that garnered her support and ultimately was approved by Section XI.

Although Mr. Vas is retiring on Dec. 31, Ms. Masterson will become athletic director sooner, on July 1. “She won’t need my help in making the transition. After she takes over, I’ll step back and do whatever the district wants me to do,” he said.

Ms. Masterson was one of three candidates who made the final round of interviews. Four different committees of administrators, students,

“We wanted to do an extensive search. . . . We wanted to make sure everyone was heard,” Mr. Foster, the board president, said. “We all feel really good about this.”

East Hampton’s football team, which played in Division IV as a junior varsity in 2018 and 2019 and as a varsity last spring and last fall, will have to play up in Division III this fall, as the 14th seed among the division’s 14 teams.

Jackie Lowey, a school board member, said Section XI’s decision dealt a blow to the rebuilding of the program. It is “not in the best interests of our children, our school, our student athletes . . . and this was the wrong decision,” she said. “Their process was flawed.”

Mr. Vas and Joe McKee, the football coach, who has been rebuilding the program over the last five years, told Section XI’s committees that while the numbers of participants were good, the players still needed more experience. In Division IV, the varsity went 1-4 last spring and 2-6 last fall. Prospective football players are to sign up in May. The last time East Hampton was told it would have to play up in Division III, in 2017, only seven students showed up for the first day of practice.

Mashashimuet Park's History and Future
A Conference for Young People to Create Solutions
Get Outside, Get Moving
END_OF_DOCUMENT_TOKEN_TO_BE_REPLACED