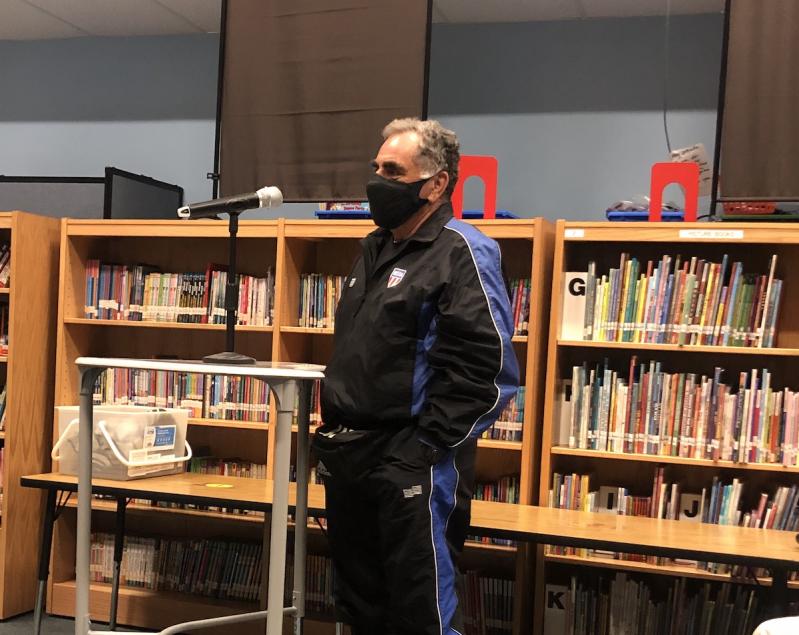 Russell Huber at the Springs School Board on Oct. 18
Christine Sampson
By Jack Graves

Russell Huber, 73, an Adelphi athletic Hall of Famer who has refereed scholastic athletic contests in New York State since 1969 and intercollegiate events since 1974, has always preferred that the players, not he, get the attention. But at the Springs School on Sept. 27, it was the other way around when, just before halftime in a Springs-East Hampton Middle School girls soccer game, he began to feel very faint.

Whitney Reidlinger, Springs's athletic director, John King, its girls soccer coach, and Tom Flight, an emergency medical technician from Montauk whose daughter plays on the Springs team, were quick to react, helping the stricken ref to the sidelines as Flight took his blood pressure and a Springs Fire Department ambulance was summoned.

"We could see he was very, very ill," Ms. Reidlinger said during a telephone conversation Saturday. "The fire department sent an E.M.T., too — two vehicles — and we got him to Southampton Hospital right away. . . . John and East Hampton's coaches, one of whom was Joe Vas's wife [Lea Bryant], took the girls aside."

Mr. Huber, who lives in South Huntington, said by phone on Sunday that he was bothered more about the kids having to see someone in such a situation than anything else.

The automatic defibrillator at hand did not have to be used. "I don't remember passing out, though they were spot on by having me sit down," said Huber. "I remember someone, Tom, I guess it was, calling for an ambulance, and they were asking me questions, though my answers got shorter and shorter."

The concern that the coaches, parents, and their children evinced during his overnight stay in the hospital and in the weeks afterward profoundly touched him, he said. "The first 24 hours I'd love to forget about, but I'm very fortunate to have experienced all the rest."

Laura Foti, a Springs math teacher whose father, Pete, officiates at games with Mr. Huber, set in motion a series of calls that tracked his room number and phone number down, and Ms. Reidlinger offered to drive him home, though he demurred, taking a cab.

While he was "still undergoing tests" and had not yet received a diagnosis, Mr. Huber said he was told he could in the meantime resume what to him is a therapeutic avocation — "I would officiate eight days a week if I could" — provided he paced himself to some degree.

Thankful for the phone calls he'd received at the hospital, and thankful, as well, for the numerous get-well cards from the Springs and East Hampton soccer players, Mr. Huber made sure he was assigned two weeks later to a game played by the same two teams at the John M. Marshall Elementary School in East Hampton.

When he got out of his car, he said, all the players ran up to welcome him. That night and the next he appeared at the East Hampton and Springs Board meetings to formally thank their coaches, parents, and players for having gone out of their way in his behalf.

"I'm still kicking because of all of them," he said.