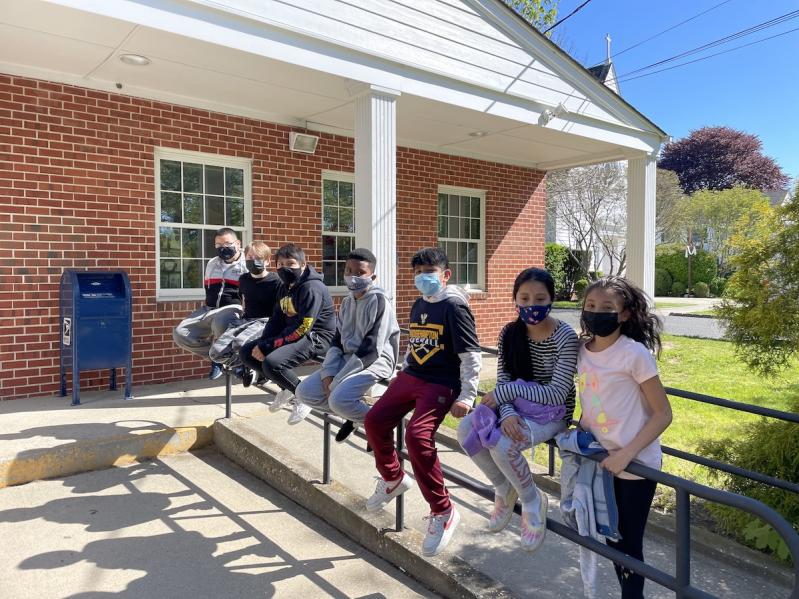 Bridgehampton School's fifth-grade book club battled a dragon over the past year and three months, though this particular creature wasn't the scaly, fire-breathing type from fantasy lore. It was worse.

Their dragon went by the name Covid-19, and the battles played out in letters the students wrote that are on display at the Hampton Library.

The project started after the students read the book "The Paper Bag Princess" by Robert Munsch, in which a dragon burns down the home of a brave young woman named Elizabeth and then kidnaps the prince to whom she is betrothed. Spoiler alert: Elizabeth is then forced to save her prince from the dragon, but the prince insults her paper-bag dress, so she decides not to marry him.

"She went through this battle with the dragon, but the internal drama was the fact that she had to rethink what was important in a relationship," said Hamra Ozsu, a Bridgehampton literacy teacher who led the lesson with Lou Liberatore, a co-teacher. "That's where the letters came in — we wanted to dive into those internal dragons."

The letters, in the children's own handwriting, reveal their struggles throughout the pandemic. Some of them came down with Covid; many other family members got sick, and some died. Parents lost their jobs and fell behind on rent. Students were oftentimes alone. It was hard to concentrate on schoolwork, whether online or in person. They had nightmares.

"The pandemic hit our family especially hard when my uncle and grandma died of the virus," wrote one student. "This terrible virus taught me the importance of family and how important it is that family is there for each other during difficult times."

"You affected me by making me depressed, sad, isolated, and tired," wrote another student. "Also, I have insomnia. . . . What have I learned during this pandemic? NOTHING, because I couldn't focus because of distracting things and lag on my iPad."

"You have been taking people that I care about away from me," another letter reads.

And: "The thing that really broke my heart into pieces is when my mom and dad had Covid-19. They were so sick. It was like my mom and dad were going to pass away."

Headline after headline across national news outlets indicate that children's mental health struggles are surging into another kind of pandemic. In January, the C.S. Mott Children's Hospital in Michigan conducted a study that found that more than 30 percent of teenage girls and 20 percent of teenage boys "have new or worsening anxiety" as a result of the pandemic.

"The stress, fear, grief, isolation, and uncertainty created by [the] Covid-19 pandemic can wear anyone down, but many children and teens have had an especially tough time coping emotionally," the American Academy of Pediatrics wrote in a blog post in May. "As more people get Covid-19 vaccines, there is growing hope that the pressures of the pandemic will ease. But the struggles and losses of the past year will likely continue to affect families for some time to come."

In Bridgehampton, it occurred to Ms. Ozsu that the children "were facing challenges that were inconceivable to know unless we had a healthy dialogue. . . . It wasn't really until they wrote a letter and started to put it in words that I actually understood how traumatic it was for some of them."

As a member of the school's wellness committee, Ms. Ozsu said she emphasized to the students that "it was okay to not be okay this year."

"We are in it together," she said. "We are supporting each other and listening to each other's stories in a safe environment. . . . Through all of this, their theme was that they can overcome. They were able to face these obstacles and come out of it stronger than ever, and more appreciative of the interaction that we do have, even if we have to be wearing masks."

Hoedown on the Farm, Cocktails in the Garden
Main Beach Free Concerts in Final Weeks
Services and Counseling After Death of Popular Teacher Assistant
END_OF_DOCUMENT_TOKEN_TO_BE_REPLACED