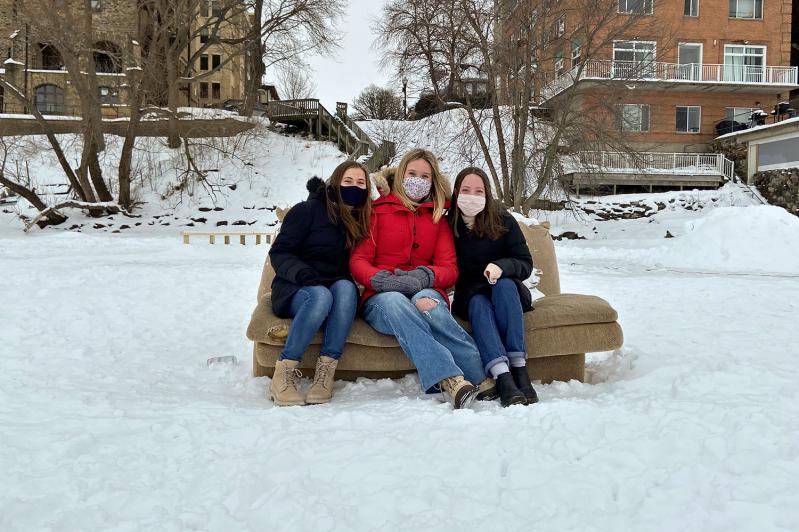 After a morning of virtual classes in her apartment, Isabel Peters, center, relaxed on a couch on frozen Lake Mendota in Madison, Wisc., with her roommates Laura Mueller, left, and Allie Anderson.
Bella Lewis
By Bella Lewis

At the beginning of September, four South Fork college students talked with The East Hampton Star about their expectations and experiences so far attending school during the Covid-19 pandemic. One semester later, this is how it's going.

Earlier this month, Jack Motz of Southampton could hear fellow University of Iowa students on the street outside his apartment. "We had a warning about going out from the university yesterday due to extreme wind temperatures, below -35, during Covid, and you really need to go out that badly?"

It is also pretty cold in Madison, Wis., but Isabel Peters of Sag Harbor, a senior studying community and environmental sociology, said social life at the university is nevertheless warming up.

"The bar scene is now even more popular," she has observed. One evening, a bar had a "senior deal," and so ensued a two-hour-long line on which some students were not wearing masks. "Everyone is kind of like 'Screw it, it's our last semester,' and also I think they all got Covid last semester, so they kind of just aren't afraid."

Lily Feinberg of Amagansett said she was surprised to see how much students had loosened up since the fall at Northwestern University in Illinois, where she is in her junior year of a history and theater degree. "There was a huge cluster of sophomores that all tested positive this past week," she said, describing it as "the first wave of repercussions" from increased socializing.

Out of 8,749 tests administered at Northwestern in the past seven days, .39 percent of students have tested positive out of a student population of about 27,000.

At the University of Wisconsin-Madison, Ms. Peters explained that she knew a lot of freshmen who moved out of their dorms after the first semester "because of how strict it was with Covid testing and lockdown in the two largest dorms for two weeks because there was a big boom."

At Northeastern University in Boston, however, "you had to stay in the exact same housing situation," said James Fairchild, a sophomore from Bridgehampton studying business administration and psychology, who said he is "actually pleasantly surprised with my university."

In the fall, he had been wary of his college and what he saw as its ambiguous Covid planning, which seemed to suggest that the priority was collecting tuition.

After a few months in the thick of it, he commended Northeastern's hybrid system, which supports international remote students as much as students who want to reserve a seat in class. With a rigorous self-testing process every three days, there is a definite sense of safety, he said.

"We Will Remain: A University, A Global Crisis, and the Lessons of Leadership" is the recently published book about what worked in the process of reopening school by Joseph Aoun, president of Northeastern University.

Mr. Motz, a history major, chuckled, giving the disclaimer that "it's just what I noticed," but when he receives the Covid update email every two to three days at the University of Iowa, he said "the email only shows the visual graphic of the curve when cases are low. They will take away the visual graphic otherwise."

Ten new cases were reported since Friday out of 30,000 students at the University of Iowa, but the school does not provide the total number of tests administered because health care providers are not required to tell the state, the state does not tell the county, and thus the county does not tell the university, a campus health officer told KCRG news, a local paper, in September.

At U.W. Madison, an app called Safer Badgers tracks students' Covid test history, symptoms, and any off-campus positive results. With a negative test every five days, a "badge" in the app will be green and the QR code will allow students to scan into classroom buildings, dorms, and the student union, for example. The app is required, so anyone without a smartphone can use one through a university lending program.

If a student tests positive, the badge will be red for two weeks and after that the student will not need to be tested for 90 days, but will still have campus access. The library specifically does not scan the app; rather an employee just looks for the green badge. "There is a different color circle that spins around your face every day so you cannot screen- shot your green badge and use that every time," said Ms. Peters.

ID cards also deny access to those who are not residents of dorms, preventing friends from coming over.

At Northeastern, said Mr. Fairchild, one guest is allowed per apartment, but only if that person already lives in the building. Ms. Feinberg reported that a freshman friend of hers at Northwestern said she is not even allowed to go into another person's room in her own dorm after 8 p.m., strictly regulated by resident advisers.

As someone whose personal policy it was to never do homework in her room, Ms. Peters was concerned about the closure of libraries in the fall. "I would say it's a common feeling for my friends and me: We really don't feel that productive at our desks," she concluded after trying it out for the semester.

Though the library has reopened with reduced capacity, entrance requires the twice-weekly Covid testing, which requires waiting for the test result, all of which really changes the whole get-up-and-go to the library motivation.

The four students' work is entirely virtual on their respective campuses this semester since such a small percentage of classes are being offered in person. They self-identified with middle-of-the-road comfort, having close friends over and keeping it small, but they still hear about get-togethers of about 20.

Ms. Peters said she and her friends go bowling or occasionally to a bar if it is out of the student area in Madison. They play games, paint, and try to cook all together in a kitchen with enough counter space for one cutting board. Though these cozier moments are something that would have escaped her otherwise, as a senior it is disappointing to not experience all the hallmarks of a college year.

Mr. Motz indicated he would also be upset if this were his senior year, but at this point in his college career "it's almost like a break" and playing video games and watching movies with his roommates is not too bad a deal. Although, he especially misses student-run stand-up shows.

"I know it's not what most people would expect or want to hear, but I find it easier to be virtual and choose your environment for studying," said Mr. Fairchild, who finds even with the option to be in the classroom for one of his classes, the main focus of teaching is for the 30 to 40 students on Zoom as opposed to the 10 or so being recorded in the classroom, which feels "a bit under a microscope" anyway.

Ms. Feinberg is emphasizing the "cozy, smaller moments, harder to come by in regular college," but still had a hard time at the end of the last quarter when it got colder and the roof on her building, which had facilitated distanced socializing in the fall, was less of an option.

All four students missed the spontaneity of college and are a bit tired of having to meticulously plan anything fun.

Some spontaneity prevails. "One guy and I are always in the same Zoom breakout room for one of my classes, and then one night, out at the bar, he was in line at the same bar and we were outside at a table," fenced off to prevent people skipping the line, said Ms. Peters. Never having actually met in person, "he hopped the fence and pretended to be with us," Ms. Peters laughed.

"He got immediately kicked out," she added.