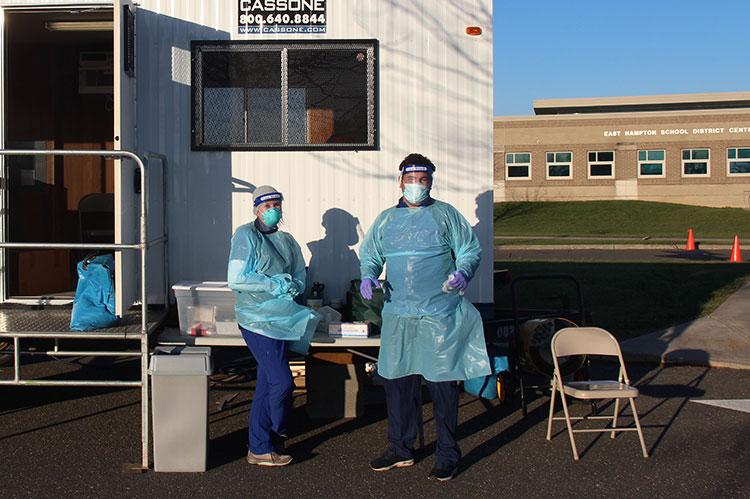 As schools look to remain open despite rising Covid-19 case numbers in the community, testing a percentage of students and staff will eventually become a requirement. A community test site at East Hampton High School, above, is open by appointment on Tuesdays and Thursdays.
Durell Godfrey
By Christine Sampson

The widespread hypothesis in New York State that school is one of the safest places for children right now was put to the test in East Hampton last Friday. In cooperation with Suffolk County, the East Hampton School District gave rapid Covid-19 tests to 207 of its students and staff members -- and turned up zero positive cases.

"It's a sign that our protocols in schools are working to keep everyone safe," J.P. Foster, the East Hampton School Board president, said by phone on Friday evening.

Contact tracers have determined that children who do test positive are contracting the virus at home or in the community, not in the schools. But even a few cases in schools can have a drastic ripple effect, particularly if teachers get sick or must quarantine, because substitute teachers are in very short supply across Suffolk County.

"What they are realizing is schools are really the safest place at this point. All the statistics are bearing that out," Richard Burns, the East Hampton superintendent, said this week. "Quite honestly, if it gets to some staff members, we're really worried about that. If we close, that will be the reason we have to close -- that we don't have enough staff to cover classes."

The substitute shortage was the case even in larger districts such as Shoreham-Wading River, according to Newsday, and that was the case this week at the Bridgehampton School, where one student in the sixth grade tested positive late last week. A total of 14 students -- out of 18 in the entire sixth grade -- and 10 staff members needed to quarantine. And because of the number of Bridgehampton staff members who were impacted, that single case of Covid-19 disrupted the district's much-anticipated plan to bring its seventh through 12th graders back for in-person learning in groups. Instead, 10th through 12th graders returned to remote learning after just three days in school last week, while seventh through ninth graders, who were to have returned to the building on Monday, never even got the chance.

Robert Hauser, the Bridgehampton superintendent, explained this week that the 10 adults in quarantine are involved in the teaching of multiple grades and subjects. The district simply couldn't find enough substitutes, he said.

"This is the new normal," Mr. Hauser said. "You have to go with the flow here on a daily basis. The most comforting part of this is that of the 70-plus school districts in just Suffolk County, we're all experiencing this together." There has been no evidence of the virus spreading in the school itself, he said, which is widely the case in New York State over all.

He pointed to the testing requirements put in place in the Hampton Bays School District after Gov. Andrew M. Cuomo deemed that community a "yellow zone," the first of the three designations that reflect rising Covid-19 rates in a particular municipality.

"Hampton Bays is somewhat relevant to us because they are so close," Mr. Hauser said. "It helps that if we see Hampton Bays acting first, at least we know if and when it becomes our turn, we can look to them as an example of what to do."

And Springs looked to the testing program at East Hampton's John M. Marshall Elementary School last week as an example in preparation for its own testing plan. Tara Gurney, one of the Springs nurses, designed a floor plan and logistics for her district after visiting John Marshall last week.

Even though Springs has four permanent substitutes, if more than 11 teachers are out at one time, the school may have to close, Ms. Winter said this week. At a school board meeting on Monday, Springs added to its roster several substitute teachers, but Ms. Winter said not all of them will teach in person. Some of them are for remote learning only.

Starting tomorrow, Springs expects to bring all of its kindergarten, first, and second-grade students back for four days of in-person classes (Wednesdays will still be remote schoolwide). The district is also now providing extra help sessions in the morning for 90 children in third through eighth grades who were falling behind academically. Springs has 12 teachers who are being paid $75 per hour to come in early for those extra help sessions.

"It's short term and it will be reassessed," Ms. Winter said.

The Wainscott School has had four staff members test positive, but no children. The Sagaponack School has not seen any positive cases.

The Sag Harbor School District has seen at least five staff members and four students with Covid-19; students attending classes at the Sag Harbor Learning Center do not appear to be included in the state's database, which can be found at schoolcovidreportcard.health.ny.gov. Sag Harbor superintendent Jeff Nichols announced this week that one student and one staff member at the learning center had tested positive.