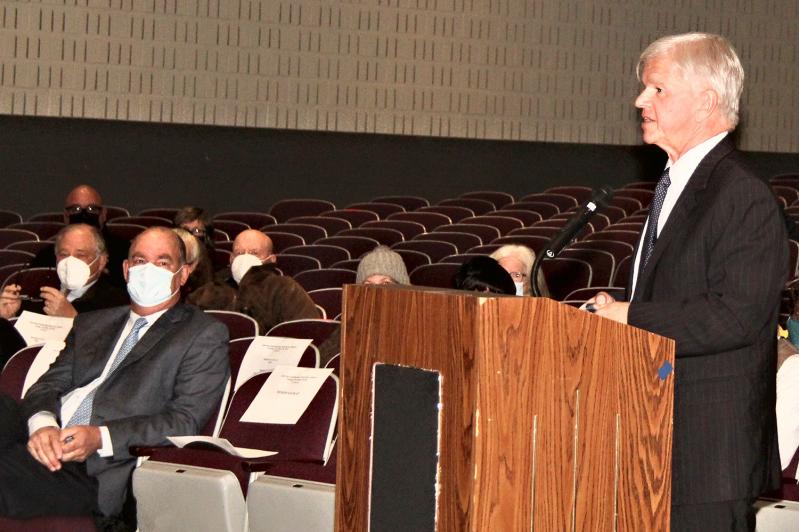 East Hampton School District officials wanted their affordable housing forum on Tuesday to be a brainstorming session focused on solutions and proposals, and from innovative financing and land use ideas to promises of partnership from elected officials to participation by community members, that’s just what they got.

East Hampton Town Supervisor Peter Van Scoyoc said that starting Jan. 1, when he and the recently elected or re-elected town board members are sworn in, it’s going to be “job number one — all hands on housing.” Lee Silberman, executive director of Habitat for Humanity of Suffolk County, and Tom Ruhle, the town’s housing director, both pledged to offer whatever support they can. And Jay Levine, a Montauk resident who sits on Stony Brook Southampton Hospital’s board of directors, offered help navigating a home financing model that is already being used not just by the hospital but also by schools and universities across the nation.

The forum also generated a number of questions that school officials said they will explore. Can a district purchase land outside its own borders? What kind of housing incentives or benefits spending would East Hampton taxpayers even approve in budgets or bonds? Can the anticipated proceeds of the yet-to-be-enacted Peconic Bay Community Housing Fund be directed to the specific needs of local folks, without having to strictly adhere to federal Fair Housing Act rules that would otherwise preclude giving such preferences? Progress may hinge on answers to those questions.

The forum “met all of our expectations. . . . There was a seed. It’s a start,” J.P. Foster, East Hampton’s school board president, said afterward. “I have more hope than I had before we started.”

He introduced the concept of shared equity investment, an idea originated by commercial real estate developers that he said can be successfully adapted to residential markets. In this model, investors contribute to a pot of money, which is used by first-time homebuyers for down-payment help. Investors are given a piece of the equity in houses purchased this way, so they share in the value of any appreciation on a home when it is eventually resold or refinanced. Stony Brook Southampton has had such a program for the last six to seven months and there are several hospital employees taking part, Mr. Levine said.

After the meeting, Mr. Levine said he believes this model has the potential to “close the wealth gap in our country.”

“Owning a home is the first step to creating financial security and intergenerational family wealth,” he said.

Mr. Silberman said that Habitat for Humanity of Suffolk County has a scalable model that could work for school employees. The organization “reverse engineers” mortgage payments and other costs so that a Habitat for Humanity homeowner is spending no more than 30 percent of his or her income on housing. They also don’t need a massive down payment. “The entire amount of money they need to purchase a house upfront is $3,000,” Mr. Silberman said.

The challenge, though, is acquiring buildable land. Habitat for Humanity has only been able to build eight to 10 properties per year in Suffolk because of that limitation. Mr. Silberman said the organization could easily double that if there were more land available. It could even establish an East End satellite office to facilitate that.

“We look forward to being part of the solution going forward,” Mr. Silberman said.

Assemblyman Fred W. Thiele Jr. kicked off the discussion with an explanation of the community housing fund. The legislation adds a tax of .5 percent to real estate transfers over a certain monetary threshold, but exempts first-time homebuyers altogether. It also raises the current $250,000 transfer exemption — which was established in 1998 — to $400,000, meaning other homebuyers won’t have to pay taxes on the first $400,000 of the cost of their new house. New York State Gov. Kathy Hochul has signed the law allowing the five East End towns to create housing plans and put the measure on the November 2022 ballot for community approval.

“I don’t think there is any silver bullet, no one answer to all of the housing issues that we are facing,” Mr. Thiele said. The housing fund is “one of the bigger and better tools in that toolbox.”

Mr. Thiele, Mr. Van Scoyoc, and Mr. Ruhle suggested it will be a tall task to gather the votes needed to establish the housing fund as a law. While the town can’t formally take a position on it, other people, including Bryony Freij of the group East End YIMBY, stepped up to say they will advocate for its passage.

Prudence Carabine, a 12th-generation East Hampton resident, pointed out that the district needs to “get moving” even before the community housing fund vote takes place.

“When this is voted on,” she said, “you should have your shovels ready.”

Mr. Van Scoyoc said there is a possibility that the town’s under-utilized accessory dwelling rules can be expanded or promoted as a solution. That would allow for existing property owners to add an apartment as long as they charge an affordable rent for it.

But what exactly is “affordable?” Sandra Vorpahl, a school board member, asked. Mr. Ruhle — himself an East Hampton graduate — said that the federal Housing and Urban Development agency establishes those thresholds in relation to the mean household income of various regions. Long Island has numbers unique to household salaries, but Mr. Ruhle said that despite the extraordinary wealth that many homeowners here have, family incomes on the East End are actually lower than those in western Suffolk and Nassau County.

Tom Flight, a Montauk School Board member whose wife is a teacher in East Hampton, raised another issue. “Has anyone tried to hire a contractor lately?” he said, suggesting that work force housing projects should be somehow incentivized so that contractors take them on as a priority. He also said districts should “reassess what a living wage is for a teacher out here. Is this a viable job for people to have and live out here?”

Joseph Sanicola, an East Hampton math instructor who is president of the East Hampton Teachers Association, said that when he and his wife decided to have a family, certain zoning restrictions made it so they couldn’t add onto their East Hampton property, and they had to sell it and buy a bigger, more affordable one in East Quogue. He pitched building apartments that could serve as starter homes for young teachers and other school employees while they save up for down payments. When they eventually move out, there would then be room for new employees to move in.

The South Fork Commuter Connection, Mr. Sanicola said, has made a huge difference for school staff with long commutes. “That train is allowing this district to operate in a very successful way,” he said, suggesting the district find a way to take greater advantage of it. He also suggested that people lobby federal lawmakers to repeal or modify the law that abolished the SALT (state and local tax) deduction for homeowners, because landlords tend to pass on the cost of those taxes to their tenants. The SALT deduction was removed while President Donald Trump was in office. Reinstating it is a possibility, as the House has approved it in the Build Back Better package, and is being debated in the United States Senate right now, Mr. Thiele said.