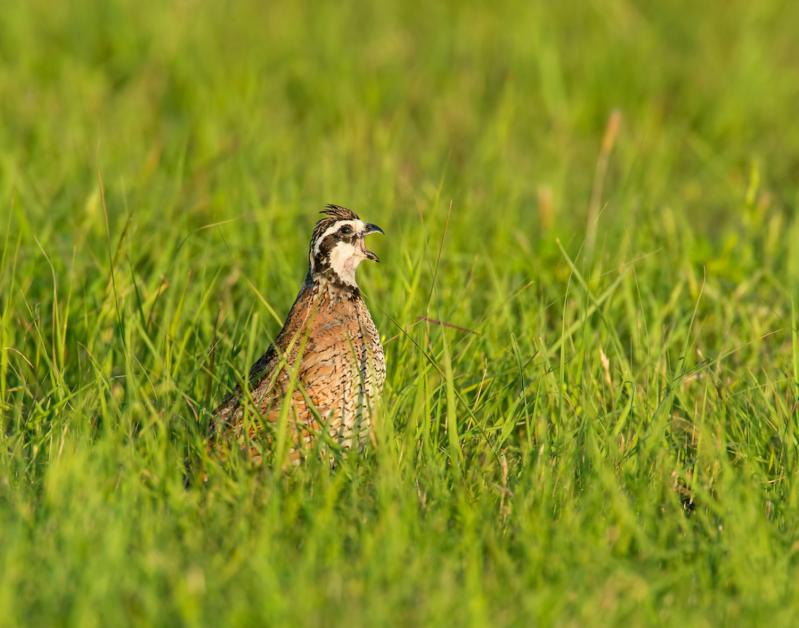 The bobwhite makes both a song and question with its name. This is appropriate, since questions abound about this bird. Long Island is at the northern edge of the bobwhite range, but they have disappeared. Where did they go? Will they come back? Locals haven’t heard their familiar song for decades. Even its name —  northern bobwhite, bobwhite, common bobwhite, quail, or partridge — is tensile and open to interpretation.

Their whistle, which sounds like “Bob White?” can carry for over 500 yards and is beloved. Edward Howe Forbush, in Birds of America, edited by T. Gilbert Pearson in 1917, described it as “one of the cheeriest sounds in nature” and “pleasing, heartening, delightful.” The “bob” note is low while the “white” note is high; it ascends into a question. Bob White? Those who heard this bird on a late spring or early summer morning during most of the last century have not forgotten it.

Harvey Bennett, a 13th-generation Bonacker who ran the Tackle Shop in Amagansett for more than 40 years, grew up on a farm at the end of Town Lane, in Amagansett.

He said there were three gun clubs operating on the East End back when the bobwhite sang: the Maidstone, the Amagansett, and the Bonac Gun Clubs. Bennett said the Bonac club had a clubhouse near Lake Munchogue, now called Oyster Pond. You might still find the ruins, he said.

“There used to be somebody in town that had the door. The front door off of that place that had everybody’s name on it, carved in it. That disappeared. Nobody knows where that went.” But there’s a trail that goes right by the old spot, he said, “as soon as you find all the old whiskey bottles in the bushes? That’s where it was.”

“Those guys released bobwhite quail down there. I’m almost 100 percent  sure that’s where they first came from.”

It is also documented that nearly 300 banded bobwhite were released on Further Lane in East Hampton and the Polo Field in Montauk in 1950 by the New York State Conservation Department as part of a program to manage their population and monitor the number shot by hunters during quail season, in early winter. Their comings and goings were chronicled in a column called “This Week Outdoors” that ran in The East Hampton Star. Letter writers and reporters mentioned hearing “Bob White?” from Northwest Woods to the environs of Main Street in East Hampton Village.

Bobwhites sing in the spring, when their winter coveys break up and they start searching for mates. A covey is a group of bobwhite, formed during the autumn when the breeding season is over, which roost together at night. They sleep on the ground, tails touching, heads pointed out, like a 30-pointed star ready to burst in different directions if threatened.

“On a nice, sunny day, when you’ve had some cold weather and then the sun comes out and you stand still, you would hear them every now and then, calling,” said Bennett.

Jim Grimes, an East Hampton Town Trustee and lifelong resident of Montauk, remembers them well. There were several areas in Montauk that held bobwhite, he said. Up by the Montauk Manor, the area by the Hither Woods overlook, and the area southwest of the Montauk landfill. “But the biggest numbers were up in the East Lake Drive area,” he said. “It was a big, contiguous tall-grass prairie.”

“I remember it was 1956, because that was the year the original Moby Dick came out, and we had to drive to East Hampton to see it,” said John Gangemi (this author’s father). “I’d spend a couple of weeks on East Lake Drive with my uncle, Leo Castiglia, who owned a house across from the Indian Burial Field.” He remembers long walks through tall grass to meet a friend who lived next door, which was nearly a half-mile away. That’s how sparsely developed East Lake Drive was in 1956.

“I remember going out there and hearing bobwhites all the time,” said Mr. Gangemi.

“There was nothing in Montauk back then,” said Mr. Bennett. “It was grazing land.”

“Sure, I remember when they were around,” said Mark Brugnoni, who has lived in the same house in Amagansett since 1972. “Years ago, 50 or 60 years ago, you could see them on the parkways on the way to the city,” he said.

“They were around here, on Main Street. They were in the fields by Amber Waves. I’d see them down in Napeague, a couple of places in Springs. The edge of the meadows there by Landing Lane, I used to put ’em up there.”

They were here, a part of the songscape of the East End. Now they’re gone.

Back in 1910, when Elon Howard Eton wrote Birds of New York,  he said, “It is a rare bird in all portions of the State, excepting Long Island.” So they were here, even before the Bonac Gun Club and the Conservation Department released them. But by 1974, when John Bull wrote his similarly titled Birds of New York State,  they were already in trouble. The top two reasons he cited were the “decline of agriculture” and “rapid destruction and subsequent development of open country.”

By 1985, concerned columnists in The Star  were remarking on how infrequently they were hearing “Bob White?”

There are no data for earlier decades, but the tallies from the Christmas Bird Counts in Montauk through the 1980s — seemingly the pivotal decade — is consistent, with 50 to 60 bobwhites counted each December. In 1988, a record 134 were tallied. However, in 1989 the number crashed to 14. They haven’t recovered since. Where did they go?

A species assessment by the New York State Department of Conservation declares that “the loss of woodland, old field, and hedgerow were likely important factors in the decline.” Feral cats and, ironically, the improved status of raptors, due to the banning in 1972 of the dichlorodi-
phenyltrichloroethane (the pernicious pesticide better known as DDT), may have also played a role. On top of that, a 2013 study by Pierre Mineau and Melanie Whiteside found “lethal pesticides were nearly four times more likely to be associated with population declines than the next most likely contributor, changes in cropped pasture.”

Grimes said that Deep Hollow Ranch, which prides itself on being the “oldest working ranch in the U.S.A.,” used to run cattle up East Lake Drive. To keep the land good for grazing, they’d routinely burn it. There was nothing too scientific to their methods. “They’d drive up the road and throw flares out the window,” he said. In the 1960s, they stopped running cattle. “Once the burning stopped, the habitat began to change.” By the 1970s and ’80s, you no longer had to walk a half-mile to get to your neighbor’s house.

East Lake Drive doesn’t look like Levittown, but it’s far from what it would have been in the postwar years. Not the suburbia of mid-Island, but “fancy suburbia” might be  a fitting description. One current application before the East Hampton Town Planning board, at 435 East Lake Drive — that is, not too far from the Indian Burial Field — seeks to raise an entire four-acre property five feet above grade so that a new resort can be built. Spoiler alert: It won’t be a bobwhite resort.

But despite all of this, there are efforts to reintroduce the bird to Montauk. Five years ago, Suffolk County started a release program at the Third House Nature Center.

Jessica James is the program coordinator. She relayed the skepticism of the Department of Environmental Conservation. “Long Island? Forget about it. They’re extirpated and not coming back,” she says the  D.E.C. said. “There’s no habitat. Don’t even think about it until you take care of the habitat problem.”

She said a covey of bobwhite needs anywhere from 40 to 100 acres to live. (This may be true, but might also have come as a surprise to those residents near Main Street who heard “Bob White?” in their village  backyards in the 1950s and 1960s.) Montauk is home to more than 4,000 preserved acres, of course, but they no longer contain much bobwhite habitat. Instead of grasses along East Lake, for example, shrubs have taken hold. Bobwhites need grassland to survive and breed. “The ordinary, more or less neglected farm is a paradise for them,” Forbush wrote in 1917.

James raises the bobwhite from hatched eggs at her house. After a couple of weeks, she moves them outside into a fenced-in enclosure.

“It’s a lot of smelly, dirty work,” she said. “Quail are filthy little creatures.” She said releases must occur year over year for some sort of critical mass to develop that can survive. They are in year five of the county release program and, she said, they’ve released about 1,000 birds in the last four years. How many have made it? They don’t know.

She explains they have no real way of tracking the success rate. “When we see one in the woods without a band, that’s exciting, because we know it’s a wild hatch.”

“The community is completely in love with this program and very supportive,” she said. And it’s a fantastic educational tool for the local school and library. But one has to wonder if it’s all for naught. If the tide of development, if the loss of native grasslands, is just too much. The old-timers I spoke with seemed to agree with the D.E.C.

“There’s too much traffic. Too many people,” said Brugnoni.

“It’s an overuse of things. You need to turn this stuff back into the natural environment,” said Bennett.

“I would love nothing more than to prove the D.E.C. wrong,” said  James defiantly.

Bob White? Unfortunately, probably not. At least the Indian burial field is still there.